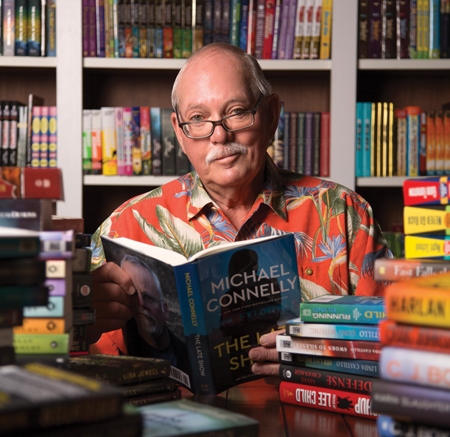 Journalist Allen Pierleoni was 12 when he first fell in love—with books. “I was a real introvert in elementary and middle school. I would find refuge in the school library,” recalls Pierleoni. “I checked out books of all kinds. If it was on the shelf and it attracted me, I would check it out, to the point where all the librarians knew me.”

The infatuation never ended. Pierleoni is “always involved in two or three books at a time. It’s just part of my life.” His tastes are wide-ranging; he delves into everything from history and biographies to sci-fi and short fiction from The New Yorker. Mysteries, he admits, are his “guilty pleasure.” Pierleoni is a big fan of Bill Bryson, author of “A Walk in the Woods.” “I just love his stuff.” And he’s been known to revisit old favorites like “The Lord of the Rings” trilogy and “A Farewell to Arms.”

Pierleoni was recently tapped by Capital Public Radio to oversee Authors on Stage, a new series from the CapRadio Reads program for which he conducts live interviews with best-selling authors. The new gig suits him well: As moderator of The Sacramento Bee Book Club for 16 years and author of two newspaper columns devoted to books, Pierleoni has interviewed hundreds of writers, including literary luminaries such as Michael Chabon, Amy Tan, T.C. Boyle and Tom Robbins.

There is one author Pierleoni never managed to convince to speak for the Bee Book Club, in spite of several attempts to do so: Dean Koontz. But he did manage to snag a phone interview with the suspense writer a few years back. “It took all the influence I had with his publicist and his publishing house, and finally he relented,” recalls Pierleoni. “He was going to give me 15 minutes and we ended up spending 90 minutes on the phone. So that was the next best thing to having him at the book club.”

For Authors on Stage Jan. 29, Pierleoni will interview Alafair Burke, author of two highly acclaimed crime series—one set in the Portland, Oregon DA’s office, the other in a Manhattan police precinct. Burke, a Stanford Law School grad and former deputy district attorney in Portland, teaches criminal law at New York’s Hofstra Law School. In other words, she knows of what she writes.

Does Pierleoni harbor any dreams of becoming a novelist himself? “I’ve been working on something,” he replies archly, “but I’m going to take the writer’s out and say I can’t talk about it.”

For more information about the Authors on Stage series, visit capradio.org/reads.