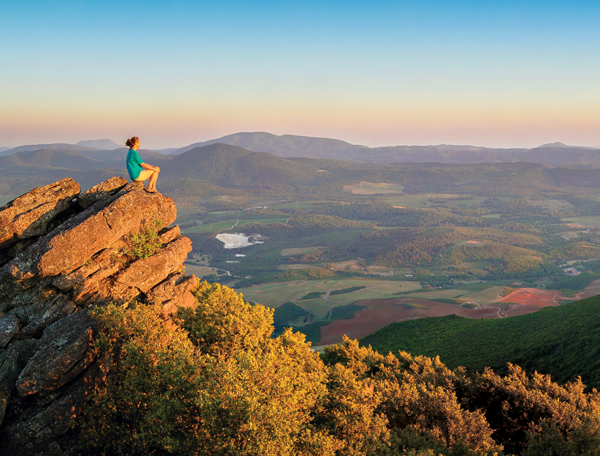 Lake County’s treasures await visitors who are ready for some gentle adventure.

At the corner of Main Street and Konocti Road in Kelseyville, a modest brown sign points travelers westward to Mount Konocti, a looming lush peak towering over Clear Lake in Lake County. You drive past Mountain Vista Middle School and some unassuming bungalows before a yellow sign warns of an unpaved serpentine road that disappears among thick clusters of chaparral, oaks, madrone and manzanita for the next three miles.

I hesitated. My sweet little Prius has whisked me across the Sierra, where I have gasped as it ascended both snowy and sunny ridges. I’ve tooled around the craggy cliffs of California’s central and northern coasts in it, too. But I also teetered once on a dirt mound near Yuba Gap as I searched for a backcountry trailhead, the Prius’ low clearance acting as a fulcrum; two bear hunters and a sheriff eventually rescued me. And that’s what was on my mind as I paused at the gravel road ahead.

Mount Konocti is actually a dormant volcano and, since 2011, also a 1,500-acre park maintained by Lake County, where I spent a long weekend in early December. Clear Lake is California’s largest natural body of fresh water and North America’s oldest at 1.5 million years, and surrounding this foreboding giant is not one peak but five. So while I had curiosity and maybe some fearlessness, I also harbored some prejudice and precaution.

I had been to Lake County several times in as many years to work on other stories, including one on the methamphetamine industry that had seemed to become synonymous with the area. I had reported on recovery efforts following the Valley Fire in Middletown in 2015, south of the lake, and on regional water issues and the nearby Indian casinos. During that last reporting trip with two colleagues, I ended up at a quaint, quiet remodeled inn and restaurant for dinner one night in Upper Lake, and we also took a break hiking in the remote Mayacamas Mountains to the west of Clear Lake. We thought we could see almost to the Snow Mountain Wilderness within Mendocino National Forest. It felt then that there was more to Lake County than I was reporting and writing about, that all of this natural beauty might easily ensure it as a leisure destination, but that news headlines and wildfires had stymied that in recent years.

I eventually, haltingly, scaled Konocti that December day, holding my breath those 3 miles as I gripped my steering wheel and attempted to sneak peeks at the lovely valleys and hills in all directions. I also saw vineyard upon vineyard upon vineyard, more than I imagined were in this neck of California. Along the way, I passed mature canyon oaks, some reportedly older than 500 years. A popular area hike, along the Wright’s Peak trail, leads to the preserved cabin built in 1903 by pioneer Mary Downen.

That night, I checked in at the Featherbed Railroad Bed & Breakfast Resort on the opposite shore of the lake near the town of Nice. Recognized as one of the most unique places in the country to stay overnight, the Featherbed Railroad includes nine refashioned cabooses—and by “refashioned,” I mean that seven out of the nine wagons have a whirlpool tub. Apparently the resort enjoys a loyal clientele of train enthusiasts, so much so that when I contacted owners June and Paul Vejar to ask about a reservation, they replied, “Do you have a particular caboose that appeals to you?”

In fact, I did: The Wild Wild West caboose seemed most fitting for my first night’s stay in Lake County, harkening back to a time when, as the car is advertised, “the Clear Lake area had prospectors and cowboys roaming the expansive hills and enjoying the beautiful crystal clear waters.” (In the 1870s, Clear Lake was along the stagecoach route up to Ukiah.) With a varnished wood ceiling, second-story cupola seating and antique claw-foot tub, the room provided vintage ambience and creature comforts.

Before settling in, however, I shared a late dinner of homemade chicken pot pie and a glass of chardonnay from nearby Shannon Ridge Winery with the Vejars, who have run the Featherbed for three years (though it was established nearly three decades ago).

For the Vejars, who owned a hairstyling salon in San Diego before heading to Clear Lake, it was somewhat of a baptism by fire—almost literally, they said, when three weeks after their arrival at the inn, evacuees from the Valley Fire came beating down their doors in droves, desperate for shelter. Since then, they have taken to their new surroundings, getting involved in civic causes, such as efforts to revive tourism to the area and delving into Lake County history, all the while welcoming guests from around the globe. After dinner, I read about the unlikely resolute pioneer Mary Downen, who rode on horseback to the top of Mount Konocti and was so taken with the views that she built the cabin for herself there. I also was charmed by the dozens of comments in the guest book, including one from Roger in England who, with boyish glee, penned his note sitting in the cupola: “I am a railroad enthusiast of old, but they don’t have cabooses in the UK, never mind ones you can actually stay the night in!”

The fog that greeted me the next morning gradually, almost poetically, burned upward as I drove south along the shoreline to Anderson Marsh State Historic Park. There, amid a striking photo display about wildlife in the area, including close-up images of a young mother bear and an adolescent bald eagle, I took advantage of the sunshine to head into the hills above the wetlands. For two hours, I climbed along Lewis Ridge, amid stately blue and valley oaks, pausing every now and again to gaze at the grasslands. The next day, while quietly walking through the Historic Courthouse Museum in Lakeport, I would admire the craftsmanship of a tule balsa boat and humble yet elegant Pomo Indian baskets, all woven from Clear Lake’s plentiful tule and sedge-rush reeds.

I saw that same appreciation for the region’s flora and fauna as I unpacked in my room that evening at the Tallman Hotel in Upper Lake, where I had dined a few years previously during that reporting tour. Virtually everywhere you turn at the Tallman, you’re confronted with an affection for not only the region’s pioneer history but also, as a book on the history of the Tallman succinctly puts it, “the dusky natural hues . . . the serenity and romance of nearby marshes and lakes.” You’ll find hand-painted lampshades featuring marsh wrens, stenciled renderings of egrets, an analog alarm clock, exposed shower fixtures, mosaic tile flooring and, in my case, the Japanese teak hardwood Ofuro soaking tub on my back deck. Though you’re in Northern California, you might also feel as if you’ve slipped into a French manor house.

Native New Yorker Rufus Tallman built and opened his hotel in the early 1870s, along with a neighboring saloon, only to have his business suffer through a devastating fire and burn to the ground in 1895. He rebuilt a smaller inn and continued to host timber businessmen traveling through the area. Upon his death, he bequeathed the hotel to his daughter, Winnie. When she died, the building fell into disrepair and the property ended up vacant for four decades, until 2003 when Lynne and Bernie Butcher bought it and set forth on an extensive renovation.

Thankfully, the Butchers were able to preserve much of the hotel’s original features, including bannisters and staircases, while adding period moldings and hand-painted murals, as well as those mosaic floors and claw-foot tubs. I barely wanted to exit my room for a dip in the Ofuro, so pleasing was the entire composition of my cozy room.

I had dinner next door at the Blue Wing Saloon. Once lost to Prohibition, the saloon’s black walnut bar and dining tables, I later read, were locally crafted from a century-old tree harvested from the property. Craftsmen also found old-growth redwood wainscoting buried beneath paint and wallpaper during the Tallman’s renovation, which was reused in the saloon, making for a warm and intimate ambience. All that aside, just when you think you can’t do a whole lot with a kale salad, the one I ate that evening at the Blue Wing was exceptional, lightly doused with a warmed sherry vinaigrette and tossed with Brussels sprouts, pancetta, roasted applies, almonds and Parmesan.

I also ate well late the next morning back in Lakeport, where brunch was in full swing when I arrived at the pleasant Park Place Restaurant adjacent to Library Park and overlooking the lake. Over my hefty Gringo Burrito, filled with sausage, green chilies, potatoes, scrambled eggs and salsa, I studied a map of Clear Lake State Park, which is where I was soon to be headed. The history of the park mirrors most other chronicles in California, with indigenous people—in this case, the Xabenapo Pomo (now known as Big Valley Pomo) and Lile’ek Wappo—living peaceably for centuries, fighting incursion from white settlers, abdicating land based on treaties that were later ignored. At one point, a treaty with the U.S. government gave the tribes 72 miles of lakefront land and a promise of peace, only to be later dishonored. Successive owners grazed, farmed, hunted and fished the area until eventually, in 1948, county and state officials agreed to preserve the land and water as a state park.

I saw few other visitors as I started along the Kelsey Creek Trail on the northern edge of the park, the silence allowing me privileged glimpses of wood ducks and mallards gliding across placid waters. On the Dorn Nature Trail, through a tunnel of blue oaks and California bay laurel, I could see the glistening lake, and at one point, a flock of birds flying low in a studied line from east to west.

It was, I thought, not unlike what Mary Downen in 1903 witnessed as she climbed Mount Konocti, whose name, I learned later, is derived from the Pomo words kno, for mountain, and htai, for woman. On clear days at precisely 2 p.m., Downen would signal with a mirror to her daughter and son-in-law who lived in Lakeport that she was all right. If no mirror flash came, they would ride horses up the mountain to Downen’s cabin to check on her. Those pioneering days are long gone, but Lake County, I found, still invites curious travelers to scale its heights, take in the views and even reminisce about the Wild, Wild West while sleeping in a caboose.