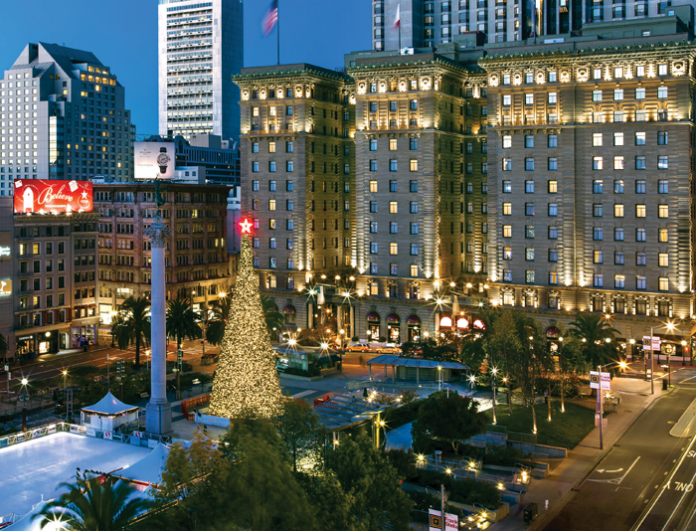 It’s cold—it’s San Francisco, after all. It’s also crowded—it’s Union Square—but that adds to the happy energy. Your ankles are wobbly, and you don’t dare look up at the window decorations on the top five of Macy’s seven floors, or at the perfectly symmetrical Christmas tree nearby. You can smell sausages from the vending cart, and coffee and hot chocolate from the cafe. If you don’t think too hard, you can imagine you’re skating figure eights in perfect time to the holiday music. The Union Square Holiday Ice Rink epitomizes big-city Christmas like not much else.

In fact, for Northern Californians, no place rivals San Francisco at the holidays, with its decorations and lights, skyscrapers and department stores, all the hustle and bustle enhanced by the clang of the streetcars and honking Lyft drivers. Add in some of the season’s special events—for example, in Union Square Park, you can catch Drag Queens on Ice and SantaCon (so many drunken Santas!) the second weekend in December—and you may find your shopping backdropped by more fun than usual.

One of my favorite San Francisco holiday traditions: The SFSPCA teams up with Macy’s Union Square to showcase adoptable animals in the store’s window displays. Last year, more than 250 needy pets found homes, proving that the “doggy in the window” draw is indeed strong.

The city’s December calendar is packed—performances of “The Nutcracker” and “A Christmas Carol,” a showing of Tim Burton’s “The Nightmare Before Christmas” accompanied by the San Francisco Symphony . . . the list goes on and on. (In the Civic Center area at night, check out the lights on City Hall—usually red and green in the nights leading up to Christmas, then white and gold for New Year’s Eve and New Year’s Day.) Take the kids to one of the city’s holiday teas, perhaps the beloved Teddy Bear Tea at The Ritz-Carlton on Nob Hill or the Children’s Magical Tea at the Top of the Mark.

Whatever you do, you’re going to need somewhere to stay, because it’s impossible to do San Francisco in a day trip at the holidays—too much to see, too much traffic. Here a few favorite places to spend the night:

Westin St. Francis—On Union Square, this venerable hotel is right in the thick of holiday central. Choose a room in the Landmark Building overlooking the park. A $45 million renovation, completed in April, means the rooms throughout the property have been spiffed up and modernized—paint, carpets and tile are bright and fresh. Each room (rates start at $249 a night) includes a Heavenly-brand bed, high-thread-count sheets and duvets (crisp white and piled with pillows), fluffy towels and all the other comforts of home, including Wi-Fi and television. Perhaps best of all, just downstairs in the lobby is the 12-foot-tall medieval sugar castle created by executive pastry chef Jean François Houdré. It includes gingerbread trees, grand towers, illuminated windows and a handcrafted European-style village with an ice-skating pond, a ski resort and shops. While you’re in the Union Square area, pop over to Café de la Presse for boeuf bourguignon pot pie or duck confit. Something else to check out if you can: Walk several blocks to the East Cut neighborhood south of Market to see the new, $2.2 billion Transbay Transit Center and Salesforce Park. It’s a 5.4-acre public rooftop recreation area that includes a half-mile loop trail, a fountain activated by bus movement in the transit center below, broad grassy spaces, children’s play area and benches. The only caveat: The center opened in August, then abruptly closed in late September due to cracks found in support beams. If it’s open, though, it’s worth meandering through. Westin St. Francis, 335 Powell St.; (415) 397-7000; westinstfrancis.com

Lodge and Inn at the Presidio—How many times have we driven through the Presidio, always after a walk in the wind on Crissy Field Beach, and eyed the brick buildings that face the grassy meadow of the parade ground, asking, “How cool it would it be to live here?” While some housing does exist in the Presidio, visitors have options for spending the night: Nowadays two inns grace the grounds of this National Historic Landmark District, and they’re within walking distance of one another. The Inn at the Presidio, which opened in 2012, has 22 rooms in a circa-1903 Georgetown Revival-style building; these fill up fast. The newer property, Lodge at the Presidio, opened this past summer with more space: 42 rooms spread out across its three stories, and many of those rooms look out on the Golden Gate Bridge. The property, which housed the Montgomery Street Barracks for the U.S. Army artillery, infantry and cavalry troops in the 1890s, today bears signs of its military past, with a gray, blue and white color palette and photos and artwork throughout. In the lobby, for example, “A Soldier’s Story” is a collage of military collectibles, including postcards, matchbooks and a torn playing card (a gesture indicating a shipping-out soldier’s hopes to return). Evening drinks and appetizers and morning breakfast (included in the rates, which start at $275) are served in the spacious common area, and an outdoor fire pit beckons with views of the Golden Gate. One of the best aspects of the Presidio properties: the location, so near the visitors’ center, Walt Disney Family Museum, San Francisco National Cemetery and the miles and miles of trails that wind beneath the eucalyptus and cypress trees—a perfect place for a walk on a bracing December day when only nature can soothe the shriek of holiday madness. Lodge at the Presidio, 105 Montgomery St. and Inn at the Presidio, 42 Moraga Ave.; (415) 800-1234; presidiolodging.com

Fairmont San Francisco—The statistics are staggering: more than 25 feet high, 35 feet wide and 10 feet deep; 10,250 house-made gingerbread bricks; 1,650 pounds of candy; 3,300 pounds of royal icing. And thousands upon thousands of happy visitors have popped into the Fairmont on Nob Hill to admire the two-story gingerbread house that takes over the lobby—along with a massive holiday tree—each holiday season. This year’s gingerbread house includes space for 10 people to dine inside—reservations are a must. Also, the Fairmont’s Gingerbread Holiday Tea, held in the on-site Laurel Court restaurant, takes place on Saturdays and Sundays through Jan. 1 and includes savory sandwiches, miniature sweets, scones and tea, hot chocolate or sparkling cider. Stay the night with one of the Fairmont’s holiday packages, starting at $179 a night. Even the most standard courtyard-view rooms are lovely, with pillow-top beds, marble baths and flat-screens. Upgrade to a “signature” room and gasp in awe at the view when you walk in—the skyline, the bay. If you happen to be in the area on Christmas Eve, wander over to Mass at nearby Grace Cathedral. Go early or you won’t get in, but it’s worth a try even if you’re not the least bit religious, just because the building and the music are so beautiful. Fairmont San Francisco, 950 Mason St.; (415) 772-5000; fairmont.com

The Inn Above Tide—Across the bay in Sausalito, the holidays take on a small-town tone, with a gingerbread contest (local businesses compete with the creations inside their establishments), Winterfest (a community event that includes a lighted boat parade and fireworks—this year’s date is TBA, but usually it’s the second weekend in December) and various art gallery openings and other events. An ideal place to stay, The Inn Above Tide sits right on the water, and its City Lights Suite (a whopping $1,755 a night) faces the San Francisco skyline. On a clear night, the buildings, the Bay Bridge and all the lights glow from across the water. Sit outdoors on the deck, fireplace blazing—it’s an indoor/outdoor see-through gas system—and you’ll feel like you’re on a boat, with the lights from the inn and Bridgeway (Sausalito’s main drag) shining on the swells. It’s a beautiful space, with a massive bathroom (including a deep jetted tub), king bed, all manner of lighting (important if you like to read in bed while your partner snoozes), lots of current magazines and the deck that functions as a second room, complete with double lounger, dining table and plenty of plants. Ferries come and go into the adjacent dock, chugging out across the bay. Get up early and—before hitting the lobby for breakfast—walk the waterfront, fantasizing about a Sausalito lifestyle. You could ride your bike to the ferry or get a real workout riding across the Golden Gate to work each day, dine at Poggio (California Italian with windows open onto Bridgeway) or Fish in the harbor (freshest fish possible), take weekend sails on the bay. Heck, maybe home itself is a houseboat. To complete the fantasy, take a wooden houseboat tour—weekends only, with a local guide who shares area history. (Call for reservations: 855-715-8090.) One last thing about Sausalito: Parking can be a challenge. Once you’ve found a spot, stay there and cruise around town on bikes from Sausalito Bike Rentals. You’ll see Blazing Saddles bicycles everywhere, but don’t look for a shop in town—those folks likely rode over the Golden Gate from San Francisco and will take the ferry back. Inn Above Tide, 30 El Portal, Sausalito; (415) 332-9535; innabovetide.com

Side-by-Side European Style—Adjacent to each other in Nob Hill, two inns—White Swan Inn and Petite Auberge—bring English and French holiday spirit to San Francisco with their Deck the Suites With Crowns and Candies program. Rates start at $369 a night at these boutique inns, fully outfitted in English and French style (think florals and dark woods). Reserve with Deck the Suites and you can decorate your own in-room tree or arrive to a pre-decorated one, find a gift under that tree, receive in-room seasonal treats (traditional English Christmas pudding and brandy at White Swan Inn and hot mulled wine, cookies and traditional French kings’ cake at Petite Auberge). At White Swan, kids will find a letters-to-Santa kit with special postage; at Petite Auberge, they’ll discover slippers their size filled with sweets, fruit and nuts. Any guests wishing to donate a gift to Toys for Tots will be matched by a similar gift or cash donation by the hotel. White Swan Inn, 845 Bush St.; (415) 775-1755; whiteswaninnsf.com and Petite Auberge, 863 Bush St.; (415) 928-6000; petiteaubergesf.com

A Marketplace of Wonders