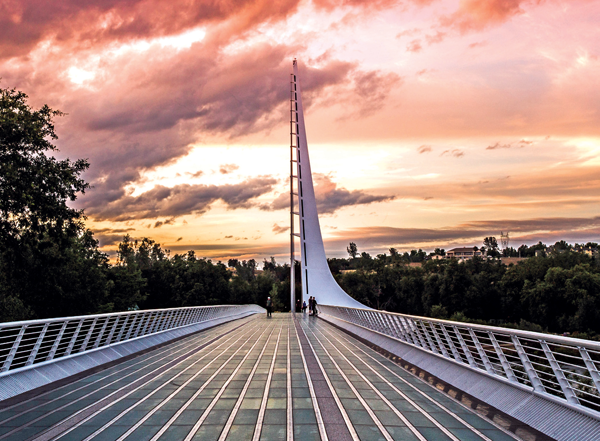 Our travel writer visits Shasta County after the Carr Fire devastated so much acreage this past summer.

In the mid-1980s, Fou Choy Saechao, a Laotian immigrant to the United States, traveled from Central California north along Interstate 5 to Portland, where he had family. Among the wave of refugees fleeing war and poverty in his native country, as he made his way, Saechao was instantly struck by how much Shasta County resembled his homeland. Forests, mountains, the vast valley all felt familiar to him. He was not alone in his sentiment. Ya Sosavanh, also an ethnic Lao, had been sponsored by a Redding family as he fled his country. From the beginning, he loved the small-town atmosphere. At age 80, he’s still in Redding.

I couldn’t have imagined the journeys of these two men in rural Shasta County, much less the trauma and deprivation they endured during “The Secret War” in Laos during the Vietnam War. I was intrigued to find it laid out in a special exhibit at Turtle Bay Exploration Park on the banks of the Sacramento River in Redding in January.

“What does home mean to you?” asked the exhibit brochure for “Between 2 Worlds: Untold Stories of Refugees from Laos.” “For many Southeast Asian people, the Vietnam War challenged and changed their concepts of home and culture.”

Thoughts of home and culture stayed with me during my tour of Redding and neighboring Whiskeytown National Recreation Area. This past July and August, the Carr Fire scorched hundreds of thousands of acres across Shasta and Trinity counties. The fire reportedly started when the flat tire on a camper belonging to an elderly couple caused the wheel’s rim to scrape the asphalt, creating sparks. Eventually, the flames leapt across the Sacramento River, practically encircling Redding and forcing nearly 40,000 people to flee. Eight people died in the fire, among them three firefighters.

My first morning in Redding, I sat across from Brent Weber, who moved from Los Angeles to Redding two years ago to work at the ABC television affiliate there, to talk about the fires and learn more about his adopted town. After a generous omelet at Deja Vu Restaurant & Cafe, located in a beaux-arts building and former hotel established in 1901, Weber pulled out several maps to show me the lay of the land, not to mention what stood in harm’s way last summer. The fire, he illustrated on a map, quickly swept across Whiskeytown’s western territory toward Redding and its surrounding hillsides and ridges, with a breadth and speed akin to a tornado.

It was raining heavily, but Weber was still game to guide me around Whiskeytown and Redding, all the while remarking that the bad weather was especially unfortunate since Shasta County offers some the best hiking anywhere, with miles and miles of well-maintained trails straddling the region. He drove me through downtown Redding, passing hip retro hotel signs and a striking art-deco firehouse. We then continued onward to the suburban Lake Redding neighborhood, where we eventually ended up on Harlan Drive, parallel to the Sacramento River. Blackened hillsides and empty lots where ranch-style homes once stood evoked thoughts of what must have been a tunnel of horror and anguish as the fires raged on the ridges above the neighborhood.

Civic leaders and residents have hope, Weber said, that Redding and Shasta County can be rebuilt. Along those lines, he was keen to show me Shasta State Historic Park along Highway 299 before heading into Whiskeytown. A museum there had been lucky in that its contents had been removed and stored safely from the encroaching flames. Weber thought they had finally been returned; however, to our dismay, we found the doors still shuttered and no sign of when they might open. We could, however, still appreciate the partially restored 19th-century ruins lining the highway. Once a gold mining hub (between the 1850s and 1880s, it was the county’s largest town), Shasta claims the oldest Masonic lodge in California, and its maroon-red façade and forest-green shutters and doors gave off a stalwart aura in an otherwise ghostly scene of grassy, roofless buildings. I read later how nearly 4,000 people at one point had called Shasta home, but by the mid-1880s, the Central Pacific Railroad was built to bisect Redding, shifting commercial and residential progress further east.

We pushed westward until we reached Whiskeytown, which felt just as empty as Shasta. Not only did rainy skies likely ward off visitors but the federal government shutdown had also left the park devoid of rangers. We stopped at the closed visitor center to look out over a misty, almost ethereal Whiskeytown Lake. The Oak Bottom and Tower House areas were closed off to visitors, so we headed north to French Gulch. Established at about the same time as Shasta—in 1849—by French miners, it had been one of California’s richest gold-producing areas, netting some $20 million in its heyday. In July, it had been evacuated, but unlike Shasta, French Gulch remains very much a living town, with a bed-and-breakfast, diner and post office. It was also, I saw, an excellent vantage point toward the Trinity Alps, whose peaks were sprinkled with snow.

Because of the region’s mining history, and despite the rain and cold, we decided to attempt the Mount Shasta Mine Trail within the park. If anything, the inclement weather at hand would assure us we’d have the trail to ourselves. Indeed, parts of the path are gulches that had swelled with rainwater, and we took care balancing on the rims to pass. Before long, though, we’d reached Mount Shasta Mine, a 463-foot debris-filled shaft that at one time had been the most productive gold mine in the region. Operated between 1897 and 1915, the mine produced some $2.5 million (in today’s dollars) worth of gold, and was eventually closed because it was simply too costly to keep in operation.

The downpour and hike made me more than happy to return to the elegant Sheraton Redding Hotel at the Sundial Bridge, a new establishment that Weber had recommended and where I’d booked a two-night stay. Moreover, the adjacent Mosaic Redding restaurant was a more-than-welcome end to the day. With subdued decor and a lengthy wine list, as well as an astute and creative California cuisine repertoire, Mosaic is easily the best culinary address in town. I ordered the spinach salad, served well with fromage blanc, but was even more pleased with the blackened ahi, pickled carrot salad and soy balsamic reduction, all paired perfectly with a half glass of Seeker Riesling from Germany’s lesser known Mosel Valley.

Ignoring the recent wildfires for a moment, it’s safe to say that the Sundial Bridge has helped put Redding on the map, and the next morning, I walked around the corner from the Sheraton to see it. The white pedestrian cable bridge spans the Sacramento River and is one of only two in the United States designed by the Spanish architect Santiago Calatrava, who was enamored with the riparian landscape along the Sacramento River. The Sundial Bridge would be his first structure built on American soil. It opened on July 4, 2004.

From about every angle, the bridge resembles a sundial—in fact, it is the world’s largest. The design and construction, which took 12 years to complete, overshot the original budget by about $20 million, understandably a source of ire among many residents. Regardless, it was a marvel for me to traverse. It also enabled me to reach the McConnell Arboretum & Gardens, which would turn out to be a highlight of my visit.

Explanatory signs throughout the gardens profess that the plant selections reflect California’s Mediterranean climate, but I felt more as if I was on a transcontinental sojourn contained in just 20 acres. I observed plants native to Chile, the Mediterranean Basin, South Africa, the Pacific Rim and Australia. Like with the previous day’s hike, I was alone on the paths that weave through patches of agave and California native grasses, bamboo, lavender and rosemary. I then stumbled onto a stunning sculpture covered in mosaic patterns and seemingly shaped as a fish coming up for air. “EarthStone,” as it was christened by the Redding artist Colleen Barry who created it, convincingly depicts “weathered leaves, stones, fossils, bark, and creatures, creating an immense primordial rock teeming with life.” Further on, I encountered Barry’s utterly fabulous “Mosaic Oasis,” composed of serpentine walls that morph into benches partly encircling a fountain—an enthusiastic homage to Antoni Gaudi’s Park Güell in Barcelona and, as such, a harmonious kaleidoscope of mosaic patterns evolving into lizards, dragonflies, turtles, butterflies and frogs.

Barry’s oeuvre came to life at the Turtle Bay Exploration Park where, after passing around a Wintu hut, I descended into an exhibit examining the delicate crystal formations of the Shasta Caverns. Much of the county, I learned, sits atop these underground passages, millennia in the making. Beyond the exhibit, I took my time at the aquarium, where several species of trout and two western painted turtles appeared fully unaware of their two-legged spectator.

Turtle Bay pays tribute to Shasta’s claim to fame, which had struck me since my visit: the great outdoors. Trails, rivers, lakes, ski areas, parks, acres and acres of wilderness—it was here in Shasta County where the outdoors was first traversed and explored for necessity, for hunting or employment. But a glass display exhibiting old wool sweaters from the 1950s and leather-strap snowshoes, among other items, made clear that skiing, swimming, camping and croquet have also been very much a part of modern living in the region.

This observation was still with me as I left Redding, particularly as I thought about the exhibit at Turtle Bay dedicated to the Laotian refugees. I afterward phoned Shannon Phillips, the chief operating officer of the nonprofit McConnell Foundation, which sponsored the exhibit and has backed dozens of civic projects, including the arboretum, in Redding and Shasta County since 1964. Its great focus now is revitalizing Redding’s downtown, particularly since the Carr Fire. Phillips told me that community and solidarity make civic engagement meaningful and essential. Her words reflected those I saw on a sign adjacent to the exhibit on Laotian refugees: “While we were planning this exhibition, the Carr Fire ravaged our community,” it read, “leaving many of our friends and loved ones homeless and reminding us that disaster can strike any neighborhood, any family, any individual and that we are all vulnerable to the human condition.”