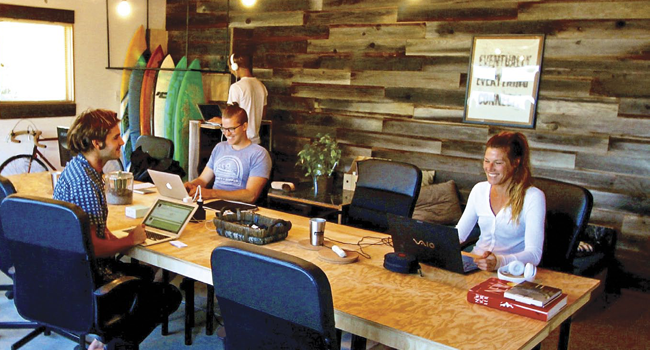 Five of us are having dinner at Bantam, a popular and buzzed-about Italian restaurant in Santa Cruz’s west-side neighborhood, and we’re trying to explain the word hype to Federico, who is visiting from Milan for a month while he works on his thesis.

“No, not quite like that,” one of the others explains. “Aura has, like, spiritual connotations, but hype has to do with public opinion.”

He’s given Bantam’s simple, upscale menu his seal of approval, which—with his thick accent—has led us to declare that the restaurant lives up to its hype.

We’re all staying at the same place about a half-mile from the restaurant, and our dinner conversation reminds me a bit of the first week of college: full of get-to-know-each-other questions about where everyone is from, who’s single and who’s attached, what we do for work, and what brought us all to Santa Cruz. We’re all beyond college, though, as evidenced by how easily we split the bill afterward, a generous tip included without any need to pass the hat a second time.

Although we come from various backgrounds, both personally and professionally, we all have at least one thing in common: We’re in Santa Cruz to stay—and work—at Outsite, a new coworking-meets-hostel concept geared toward “digital nomads.”

Founded by Emmanuel Guisset in 2014, Outsite is a coworking retreat for professionals, entrepreneurs, groups and remote workers looking to get away and get focused. “Outdoor + Offsite = Outsite,” the website explains. Respond to emails and host a conference call in the morning, take a lunchtime yoga class at the beach, participate in a Google Hangout and conduct a phone interview in the afternoon, then go for a sunset hike and walk to dinner with some new friends if you like. This is a typical day for an Outsite guest, and it sounds great. (above) Outsite guests take a break to go surfing

Outsite began in Santa Cruz, a funky beach town whose proximity to Silicon Valley makes it an ideal getaway for techies and startup types looking for a change of scenery. After much searching, Guisset found a five-bedroom, two-and-a-half-bath house near Cowell Beach, Natural Bridges State Beach, Steamer Lane and the Santa Cruz Surfing Museum, and the walking/cycling path that runs along the scenic westside beaches. He promptly signed a five-year lease and converted the 500-square-foot garage into a high-tech office with enough connectivity to power a Google corporate retreat, a fact you might forget in light of the rack of surfboards in the corner and the reclaimed barn wood wall. A San Diego location opened in 2015, a South Lake Tahoe location recently opened, and Guisset is currently plotting his next move in Hawaii.

As a freelance writer and a beach girl at heart, I was immediately intrigued when I heard about Outsite. I wondered if sharing office space with strangers might hold me accountable to staying focused on my writing, and if the ability to clear my head at the beach for a 10-minute break might recharge me more fully than my standard social media veg-out. Could it live up to this hype? Or would it just be weird to share space with strangers, and distracting to be so close to the beach?

I check in to Outsite Santa Cruz around 2 o’clock on a Wednesday afternoon after an easy two-hour drive from downtown Sacramento. I’m not sure what to expect in terms of who else will be occupying the house and what the group dynamic will be.

I’ve been instructed that I’ll be greeted by the house manager, a term that I subconsciously morphed into “house mom” in my mind, assuming that a middle-aged woman would be on hand to ensure that everything goes smoothly. I’m taken aback a bit when instead I am greeted by Britt, a 26-year-old jack-of-all-trades surfer guy who looks like he’s been plucked out of a Visit Santa Cruz brochure in his white V-neck T-shirt and impossibly effortless side-swept hair.

Britt is laid-back but earnest, showing me to my room and making sure I have everything I need. The room is spacious and filled with natural light, dubbed the “Mavericks” room after the legendary surf break a few miles north of here. (All the rooms are named after local beaches.) Two of the rooms have multiple beds and can be booked as shared rooms by either small groups or singles looking for a true hostel-type experience, but I’ve opted for a private room. The room comes outfitted with simple furnishings and plain cotton bedding, a navy blue bath towel folded on the bed and a photograph of the Santa Cruz Beach Boardwalk on the wall. The classic hardwood f loors and picture windows looking out at two huge eucalyptus trees give it a connected-to-nature vibe that is decidedly and perfectly un-hotel.

The house is silent other than our little tour, and Britt informs me that he’s granted a late checkout to a couple of guests who are hosting a small meeting in the garage-turned-office. I change my clothes and head to the beach to go for a run to kick off my stay.

A couple of hours later, after a little bit of running and a lot of people-watching (a middle school surf team practice, a girl practicing aerial silk in a huge cypress tree, a well-dressed elderly lady sitting on the bluff smoking pot), I return to the house, which has come alive. Federico is working on a laptop at the dining room table while Britt tidies up the kitchen, and the two are discussing cultural differences surrounding coffee consumption. I opt not to disclose to the Italian that I occasionally microwave mine after abandoning it all morning. I meet Mary, who’s sitting cross-legged on the couch, a throw blanket and MacBook on her lap. The scene is comfortable but respectful, as though everyone has silently agreed that sweatpants and wet hair are OK, but politics and belching are still over the line.

I’m a little surprised—and grateful—at how quiet and professional everyone seems to be, especially since nearly everyone except me is younger than 25. Jillian, a 22-year-old social media manager from Atlanta, is working on East Coast time, so she’ll be in bed by 9 p.m. Mary, 24, opts out of dinner at Bantam so she can prep for an early-morning call with a new “happiness hero,” which I learn is an actual job title at Buffer, the social media management company where she’s worked for two years. I learn later that both Jillian and Mary work for companies where all employees work remotely, a concept that gives me a twang of jealousy. I still had roaming fees and an enormous PC when I was 22, and working remotely wasn’t an option when I was starting my career.

In the morning, I meet Camille, a 48-year-old university professor who is on sabbatical and is hoping to get some writing done during her stay. I’m glad, for no good reason, to realize that at 34 I’m not the oldest guest at the house. We chat for a few minutes while I make coffee and she finishes a bowl of instant oatmeal, both of which are available in the kitchen for all guests. She grabs a piece of fruit from a cupboard labeled “The Lane,” the surf spot for which her bedroom has been named, and opens up her laptop at the dining room table. She moves her chair over a few inches, following the patch of morning sun that’s shifted since she last sat down. I wonder to myself if the Santa Cruz sunshine is part of the draw for her, having traveled from Ontario, Canada.

Britt has offered to take me to a nearby surf spot around lunchtime, so I head out to the office to squeeze in a few solid hours of work beforehand. Mary is camped out at one end of the long plywood shared desk, and I opt for a chair near the middle—close enough to chat with her, but far enough not to be obliged. We exchange easy pleasantries and resume work. Her presence does, in fact, seem to hold me accountable to a higher level of concentration than I can typically tap into right away. I wonder if she’s experiencing the same thing, if we’re both feeding off each other, but I keep the question to myself and continue working. I have a surf appointment, after all, and I want to feel like I’ve earned it.

By the time Britt comes into the office a few hours later, I’ve knocked two big deadlines off my to-do list and responded to a couple of nagging emails that seemed to continually slip through the cracks in previous weeks. Britt pulls up a chair next to me and we look at some live-feed surf cams on his phone while he asks me about my surfing ability. He asks the question as carefully as someone might ask an elderly woman if she’d like a hand on a treacherous staircase, conveying that there are no wrong answers. When I ask about Steamers Lane, he gently points out that it’s actually called Steamer Lane, and that true locals just call it The Lane. His tone is kind and inclusive in a way that is uncharacteristic of surf culture, which I know from experience in Southern California can be territorial and hierarchical and uninterested in welcoming novices or out-of-towners.

On our drive to the chosen surf spot, Four Mile (literally four miles north of town), I grill Britt about what it’s like to be the house manager at Outsite, what kinds of guests typically come, if there’s ever any drama. He tells me how the founder of Waze canceled his penthouse suite to stay at Outsite after visiting an employee there, and about a NASA engineer who slow cooked a tri-tip with Argentine spices on the barbecue for everyone. “People choose this for the friendship and the lifestyle,” he says. “It’s kind of like the surf lineup: There’s a little bit of everything.”

Our surf session is by far the best workday lunch break I’ve had in years. It’s sunny and quiet and beautiful, and I catch a few waves that make me momentarily forget that I have a call with a client in a few hours.

By the time I’m back at the house and prepping for my call, I am brimming with gratitude and still riding the momentum of my morning productivity. When I finally close my laptop and wrap up my workday that evening, I can’t believe how much work and play I’ve easily fit into one day.

I guess that’s the whole point. By getting out of my routine, I’ve seen the hours in my day with fresh eyes. By changing my surroundings, relocating to the laid-back beach town, I’ve prioritized getting outside and actually experiencing those surroundings. By working together yet separately with someone new (several people, in fact), I’ve brought renewed focus to my work. Between the affordability, the near-but-not-too-near location, the office space and resources, the on-site kitchen and surfboards and bikes at the ready, Outsite has been a success for me. It has, in every way, lived up to the hype.