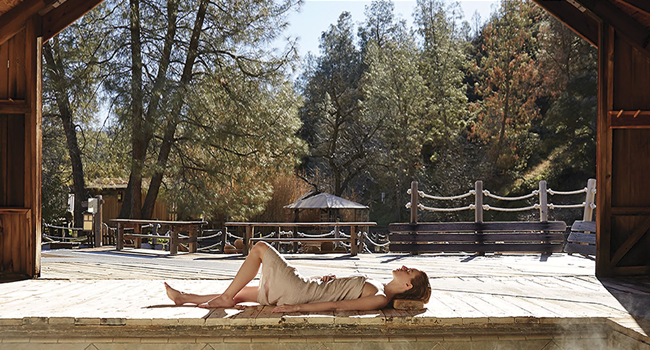 The four miles of chalky gravel road that meander alongside Bear Creek and lush hills of wild lupines and golden poppies end at a tan, somewhat foreboding iron gate before you enter WILBUR HOT SPRINGS. My car was drenched in dust, I noticed as I stepped out, and earlier, too, as I’d stopped along the road to take in the tranquil views. Bear Creek was bustling with a current, thanks to recent rains; striking tamarisk trees in bountiful bloom stood sentry along the creek banks, willowy in the light wind.

With such a dreamy landscape, I shrugged my shoulders at the thick dust now coating my car. It seemed the least of my concerns as I drove onward and parked in front of Wilbur’s offices, eager to finish the guest registration and head for the waters. This was my third visit in as many years, which says quite a bit. The truth is, I’m not the kind of traveler who returns to places often.

That said, as a native Californian who spent nearly two decades living in northern Europe (and moved back to Sacramento two years ago), I have become well acquainted with all things hot springs, actively seeking them out in their many forms. In Germany, where I lived, I found hot springs, along with sauna visits, to be an integral part of surviving the long, dark winters, and I eventually reserved one evening a week for sweating and soaking. Those years abroad, I found elaborate thermal pools of varying temperatures and mineral content alongside vast lakes north and south of Berlin. In Budapest, I visited springs with ornate statues and mosaics of Greek gods, and granite pillars topped with waterproof chess boards where wizened men in Speedos and swim caps hunched pensively over their games. Near New Mexico’s Mora Valley a few years ago, I found a cluster of hot springs by hopping the fence along a country byway and bushwhacking my way through waist-high weeds to arrive at the murky and steamy pools that sit beneath the spectral Montezuma Castle, which was built in 1886 as a hotel but which now houses Armand Hammer’s United World College of the American West.

All of this has roots as deep as geothermal water veins: As a child growing up in Sacramento in the 1970s and ’80s, I regularly got carted off with my brother by our parents to Calistoga, perhaps California’s most famous and fancy hot springs destination. Back then (and I realize I’m dating myself here, but I’m relying, too, on black-and-white photos), it cost a quarter to enter the pools, and some days they were practically empty.

I haven’t been to Calistoga in years, and in September 2015, the devastating wildfires that ravaged swaths of Colusa and Lake counties destroyed the popular Harbin Hot Springs, which many believed had cornered the market on more casual hot springing. Luckily, however, I’ve stumbled upon other hot springs in Northern California and have found them a welcome respite from the constant hum of traffic, the daily grind of work and deadlines.

They’re not easy to reach. Like the gravel road that leads to Wilbur, the one to Orr Hot Springs in Mendocino County is a lonely serpentine ribbon of asphalt that’s easy to take your eye off because the views to the Pacific and Sonoma’s wine country are so breathtaking. Nor do two of the three I’ve visited up that way have road signs alerting motorists to their locations. This could be by design. As one of the springs managers told me, “There’s something to be said for the journey and finding your own way.”

One recent weekend, I headed out early, packing two picnic baskets, towels, sunglasses and a visor. I brought a bathing suit, but something to know well in advance before visiting these springs: You mostly check your modesty at the door, as some of them are clothing optional.

After checking in at Wilbur Hot Springs, located a half-hour’s drive northwest of Williams in Colusa County, I first went to the large communal kitchen to unpack my picnic boxes. There are no restaurants at Wilbur or anywhere nearby: The springs lie on an 1,800-acre nature preserve. All guests are advised to pack food for their stay. I had stocked up on pasta and pesto, a salad mix, fruit, nuts, juice, yogurt, tea and some muffins. I then unpacked in one of the new, airy, no-frills cabins, with a utopian view of a shaded hill freckled with oak trees, wooden lounge chairs and a covered platform where yoga classes are held.

In the springs area, I showered in one of the two outdoor stalls and then entered the Japanese onsen-style “Fluminarium.” Here, steam from water varying between 98 and 109 degrees Fahrenheit wafted above three long concrete tubs. I carefully dipped into the least hot, pulling a buoyant wooden block toward me where I could fold my arms and rest my head. A sign above the flumes reminds visitors to honor the silence. While there were a dozen or so other guests there, all maintained the meditative aura.

I later submerged myself in the pool, swimming a few lazy laps before spreading out my towels on one of the wooden chairs, putting on my sunglasses and pulling my hat low onto my face, dozing off after reading a few pages in a novel I’d brought with me. When I woke, I wandered over to the sauna, which I had to myself, and daydreamed about Roman goddesses and their penchant for “Sanitas per Aquam,” from which we get the word spa.

As the sun set, and while I prepared my meal, I observed other guests perform what Wilbur Hot Springs owner Richard Louis Miller has called “the ballet in the kitchen.” They seemed bent on outdoing one another. One young woman crafted an aromatic jambalaya, another sauteed portabello mushrooms, and one couple had brought in filet mignon. I felt rather small with my simple Trader Joe’s stash.

“But cooking can be very therapeutic,” Wilbur’s co-manager, Chris Liebe, told me with a good laugh when I commented to him and his wife, Patty, the next morning about the gourmet jousting the night before. New to Wilbur (they took over the general management in March), they have extensive experience in luxury resort planning. Their previous stints were in Thailand and Bhutan, where they focused on boutique wellness destinations and, according to Liebe, remained “uninterested in a paycheck but rather a lifestyle.” Delighted with their new post, they are eager to “help guests have their own charmed life, if even just for a day,” said Liebe.

And with that, they pointed me toward the gentle hills to the west, as I hopped on one of Wilbur’s bikes. A half-hour ride took me along the creek to the Fountain of Life, a geyser that let loose just as I pedaled up, and then onward to Wind Chime Park, where dozens of colorful and exotic chimes hang from the branches of a massive oak tree. Some contained wistful notes of hope for good health and fortune.

I felt happy and hopeful as I drove later that day toward ORR HOT SPRINGS near Ukiah. It’s 12 miles from the town to the springs, and I had a stellar view to the Pacific before arriving in a deep, verdant ravine shaded by dense redwoods and pine trees. After I registered, Orr’s general manager, Ben Guenther, gave me a brief tour and history of the abundant gardens and introduced me to John Sakowicz, Orr’s night auditor and a retired police officer.

“I’d work here for free,” he said with unabashed enthusiasm. He then rubbed his hands together to demonstrate how subduction plates beneath Orr produce the springs and the water’s high silica content here. Guenther later told me about nearby Montgomery Woods, with some of the tallest redwoods in the world and a 3-mile loop frequented by guests. Orr, he added, has never advertised, but instead has relied solely on favorable word of mouth.

I could see why, as I walked beneath the pagoda roof and through the glass doors engraved with bamboo designs that open up to a bridge leading to the pools. First, I peeked into what appeared to be closets but were actually narrow rooms with Victorian-era bathtubs. Guests new to going au natural at the springs can adjust first in these private tubs, which can be filled with the same spring water as the pools. On my way to the showers, I passed a platform above the pools where guests can lounge and stargaze.

Once showered, I headed to two of the communal pools, first dipping into the hotter of the two that look out to a grassy hillside. I then edged over to a gushing fountain, closed my eyes and let the water pound my neck and shoulders.

From Orr, it’s not far to VICHY SPRINGS resort, a 150-year-old California landmark. Like Wilbur and Orr, Vichy has some two dozen rooms and bungalows, including three built in 1852. But the resort differs in look and feel from Wilbur and Orr. For one thing, a large sign along Highway 101 boasts its healing waters and star-studded clientele: Mark Twain, Jack London, Robert Louis Stevenson, Presidents Roosevelt, Harrison and Grant, as well as Bo Derek and Dustin Hoffman, have all found their own way at some point to Vichy, nestled in the Mendocino County foothills. The resort has kept a certain mix of old-world charm and cozy country inn, with a decidedly genteel atmosphere. Pretty white clapboard cottages line up across tidy lawns, and wisteria covers a wooden walking bridge; guests can register for champagne baths.

Vichy claims its waters are almost identical in mineral makeup to the renowned Vichy waters in France and Madagascar. Naturally carbonated, and hence effervescent, it bubbles to the surface from 6 miles underground and averages 90 degrees. But the baths themselves, original as they are, are rusted out and unrefined, making it oddly alluring, as if you were living on the wild frontier. Before I climbed into one, I had to remove the heavy plug to allow in the water and then lug it over to the other side of the tub to stop the water from exiting. Once in, I was deluged with tiny bubbles, like champagne.

Later, as I lounged around Vichy’s carefully manicured grounds, I read that Johannes Brahms supposedly composed an entire symphony while bathing at Baden- Baden in Germany’s Black Forest, so taken was he by the power of the famed waters there. I may not have composed a symphony during my hot springs forays over the years, and I may no longer be a resident of Germany, but no matter: While cruising back to Sacramento in my dust-caked car, I sang California’s hot springs’ highest praises.

Map Out Some Time for “Road Trip”