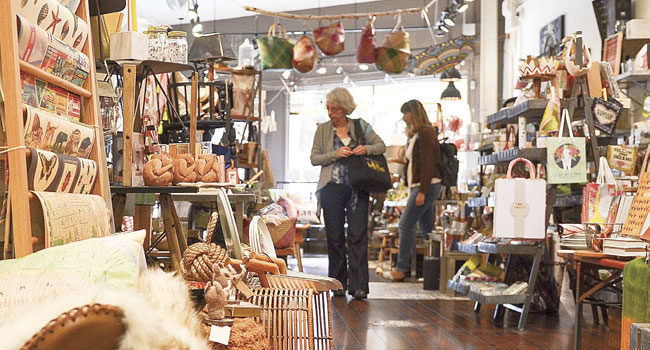 In covering travel for this magazine, I’ve taken lots of road trips around Northern California, staying at lovely inns and big resorts, dining in four-star restaurants and corner mom-and-pops. I’ve taken solo trips: a silent stay outside of Vacaville and a run up to Placerville. I’ve done romantic getaways to Carmel and Mendocino and Napa with hubby and, lately, some trio trips—just my two teenage daughters and me. It was one of these trio trips that took us to the Rockridge neighborhood in Oakland earlier this summer.

I was curious about it because a friend who used to live in Berkeley raved about some powdered-sugary Peruvian shortbread-and-caramel cookies she got at a bakery there—cookies she would regularly grab on her way home from the BART station after work in San Francisco. “It’s such a cool neighborhood!” she would say, describing a little district of shops and restaurants and galleries.

I gathered my daughters one hot June day—temperatures were headed for 105 in Sacramento—and set the GPS for the Rockridge BART station, which sits on College Avenue near the Oakland/Berkeley border. Less than 90 minutes later, we paid $3 to park under the station (lucky to score a spot on a weekday afternoon when the lot is filled with commuter cars) and stepped out into 80-degree sunshine and the eclectic neighborhood my friend had described. Rockridge’s main attraction has to be Rockridge Market Hall, a one-stop shop for coffee, wine, baked goods, cheese, seafood, organic produce, pasta, flowers, premade salads, mustard samples, you name it. A pour-over from Highwire Coffee Roasters inside the hall gave me a gentle buzz while my younger daughter declared her vanilla latte—complete with foamy art—“the best I’ve ever had.” At the adjacent Market Hall Bakery, I found my friend’s cookies, called alfajores, displayed in a thick glass jar on the counter. The lineup of pastries and breads was staggering—a lunchtime crowd gathered for pizza (slices topped with asparagus, bacon and goat cheese went fast), quiche and focaccia. Farther in, The Pasta Shop teemed with people grabbing deli salads (kale Caesar, Yukon gold potato and picante slaw, for example), fried chicken and other ready-made meals. The fresh pasta included ravioli stuffed with roasted sweet peppers, arugula and Marash chilies, and wild mushroom tortellini with ricotta, prosciutto, mortadella and pecorino. A cheese counter stocked products from the nearby farms of Point Reyes and Petaluma and from far-off ones across the ocean. Deeper into the space, seafood and meat purveyors Hapuku Fish Shop and Marin Sun Farms Butcher Shop helped customers, some of whom had lengthy questions about where the product swam or grazed, and how to cook it. “It smells like fish and chips in here,” remarked my older daughter. Sure enough: Hapuku fries up (and grills) fresh local wild rockfish every afternoon and serves it on a house-baked roll with coleslaw and tartar sauce, beside a pile of garlic or curry fries. Finally, Market Hall also is home to Paul Marcus Wines, which carries bottles from around the world, including—of course—nearby California appellations; The Flower & The B, where you can pick up flowers by the stem or in artful arrangements; and Market Hall Produce, which is packed with locally grown fruits and veggies and lots of specialty items including sauces, bulk items and other groceries, many sourced nearby.

On the corner of Market Hall, Oliveto restaurant’s recently reinvented rosticceria—downstairs from its longtime fine dining room—serves stews and sausages and spit-roasted meats paired with salsas or sauces, plus side dishes of whole grains and veggies. Choose a meat of the day plus two sides for $19. For traditional Italian, little pasta house Fillipo’s invites gorging—first from the stand of bread and garlic/herb olive oil, then with gigantic portions of comfort dishes such as lasagna, ravioli or fettuccine Alfredo. Rockridge also is home to plenty of pizza houses, including Zachary’s Chicago Pizza, where the Mediterranean comes loaded with red peppers, artichoke hearts, green olives and feta. At À Côté, small plates rule the menu—so fun to share a bunch. The menu changes nightly and might include scallops or lamb skewers or a yummy carrot risotto. At Bourbon & Beef, we saw a sign announcing the soup of the day—“Bourbon”—and figured we’d go for the specialty French onion instead. On the corner across from the BART station, Cactus Taqueria is an easy stop for custom tacos and burritos, with a base price for a tortilla and meat or veggie filling, then toppings a la carte. The ricotta pancakes at Rockridge Cafe make up part of the oh-so-simple Famous Ric Special: the renowned pancakes, plus an egg your way and bacon or sausage. And to re-energize our afternoon, we discovered La Farine Boulangerie Patisserie, where the display of cookies gave us lots of choices: We ended up with a brownie and a lemon shortbread for the girls, and an almond tea cake—complete with jam and cream on the side—for me. Cookies are a gateway to coffee. Easy enough, because on our walk around Rockridge, we saw several coffeehouses and wished we were caffeine-tolerant enough to try them all after we’d already indulged at Highwire. Cole Coffee is a busy hangout—a tight squeeze with tables inside and out, and a full lineup of coffees. At Philz Coffee, the specialty mint mojito iced coffee is just one of several addictive concoctions; whole web forums have been devoted to debating the “secret ingredient” in Philz drinks: Is it the mint sprig, cardamom or something in the cream? At Bica Coffeehouse, a collection of Bay Area coffees graces the menu, along with beans from Portland, Los Angeles and Santa Cruz.

It’s not all food and drink in Rockridge. It’s also a hot spot for home decor shops. One of our favorites was Rockridge Home, where you never know what you’ll find (although goodies from Bodum and Joseph Joseph are always on hand in the kitchen section). We spotted recycled plastic mats, lots of high-end stuffed animals, rugs, scarves, jewelry, artwork and furniture. At Nathan & Co, we could have spent hours browsing—and practically did. Including candles, cookbooks, toys, funny, one-of-a-kind greeting cards, blankets, pillows and much more, the inviting spread will yield a new item for your house or a gift for any hard-to-buy-for someone. Next door, Maison d’Etre brings to mind the South of France, with pretty displays of cookbooks and textiles—rugs and mats, dish towels and tablecloths—among a melange of curated home merchandise. It motivated my older daughter to say what she always does in stores like this: “Now I actually want to learn how to make bread and sew.”

We never visit a neighborhood without checking out the indie bookstores, and Rockridge has a Pegasus location that’s been there since 1969. With new and used books, it’s a gathering spot for readers and writers, and it’s open late—till 10 o’clock on weekdays, 10:45 on weekends. It’s not a huge place, but you’ll find a careful selection of magazines, including literary publications, and staff members who are zealots for a good book. Also in the neighborhood: Diesel, another great spot to find used and new books, and to show up for readings and live music. It’s a real hub for Bay Area authors. The Firestorm Community Mural Project in the BART Station

It’s easy to spend a full day discovering the next shop or restaurant—or coffeehouse—in Rockridge, and it’s a good jumping-off point for exploring other Oakland neighborhoods. (We also like Old Oakland, where Swan’s Market—another food hall—dominates a city block near the convention center, and where, around the corner, we happened upon the best rosemary lemonade at a little hole-in-the-wall eatery called Caffe 817.) After our day on College Avenue, we spent a half-hour or so by the Firestorm Community Mural Project in the BART Station, silently taking in tile after tile—all hand-painted, more than 2,000 strong—dedicated to the survivors of the fire that raged through the Oakland Hills just above Rockridge in October 1991. My girls hadn’t been born yet, but I recalled driving between San Jose and San Francisco that wind-whipped Sunday afternoon when KFOG announcers gravely announced that the fire had eaten through almost 800 structures and killed 25 people in one rampage down the hill. Among the tiles: a grand piano (1913–1991), “Fluffy—We Will Never Forget You” and a stark black pen on white ceramic: “Lucky and grateful to be alive.”