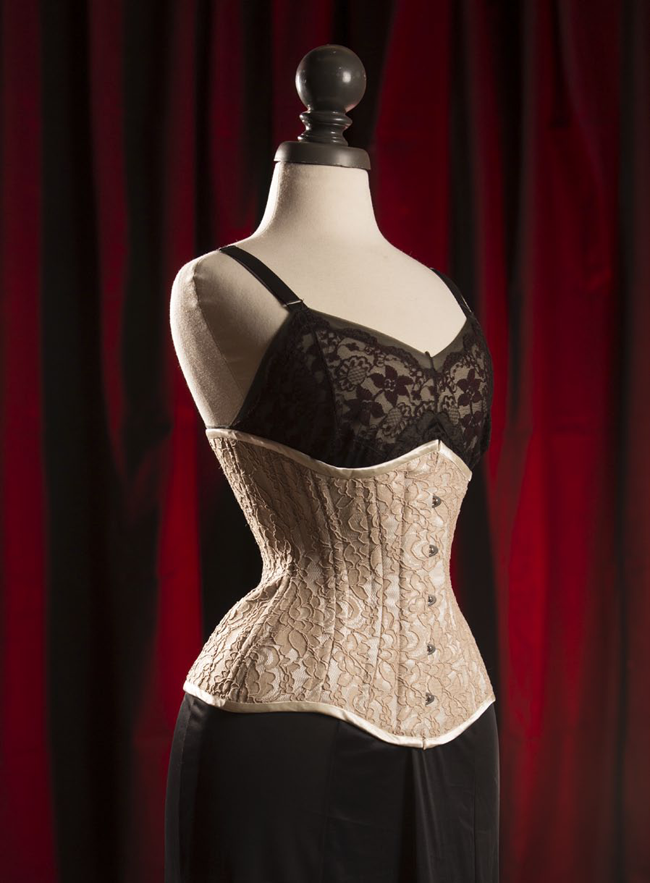 I’m no Kardashian, and my butt does not look big in anything. But now I have one thing in common with those girls: I’ve worn a waist trainer.

It started with a story idea in an editorial meeting. “Waist trainers are such a trend,” someone said. “We should test-drive one.” No one volunteered, and there I sat, a year into complaining regularly about the 10-pound midlife tire that had settled around my waist. “Fine,” I said. “I’ll do it.”

Was this wise? In history, corset-wearing women allegedly lost consciousness when they couldn’t expand their lungs properly or circulation to their heart got cut off. Remember the fainting couches? But these days, a waist trainer can be as simple as shapewear (a “torset,” for example, looks like a tank top made out of a big beige rubber band) or a moderate corset with hooks and eyes and boning. Department stores carry those for less than $50.

You also can get a gorgeous custom-made Edwardian- or Victorian-style corset for about $300 someplace like Isabella Corsetry in midtown. There, owner Erin Bray will measure you to the nth degree and stitch up something with steel boning and laces. She also sells ready-made corsets in beautiful colors and fabrics, both in the shop and online, for about $100 to $150. “For waist training, people usually start by bringing the waist in three to five inches,” she says, “but I’ve got some customers who’ve worked up to as much as 10 inches.” Her clientele runs the gamut: cosplayers, cross-dressers, fetishists, fashionistas, middle-aged gone-softies like me or young moms wishing to rein in post-pregnancy waists, men seeking a more feminine physique. “Anybody and everybody,” she says. In recent years, her business has boomed, helped by style trends and, yes, the Kardashian effect.

As a newbie, I purchased a Maidenform “waist nipper” over the counter at Kohl’s, $43, black jacquard, with four longitudinal strips of boning, 15 hooks marching up the front, and tight elastic bands top and bottom. As I stuffed myself into it, hook to eye, hook to eye, the device strained and pulled.

First impressions: Can’t breathe. Too hot. Way too confined. But, hey, my waistline is back. Can I sit down? No. Yes—yes, I can, if I sit up straight. Really straight, or it’ll dig into my ribs. This could be great for my posture! And (at the mirror) I didn’t look this good even before I had kids! Proof via tape measure: two inches smaller. Wait—what’s this spooging out the top of the thing, right under my bra band? Oh, right: my belly. And what about this weird butt ridge . . . good grief, it’s more belly, forced around back and out the bottom of the corset. Like one of those fanny packs people wore in the ’90s. As the day went on, that fanny pack disappeared because the garment crept upward, squeezing tourniquet tight around the under-bra muffin top. I tore the corset off in the car on my way home.

Bray assures me that corsets like hers would fit better. They’re designed to sit tight against the ribs and hips and, with no elastic, to have no give. They stay put. Asked about any other considerations, she reports that she often doesn’t feel like eating much when she’s laced up. “Corsets make you very aware of what you’ve consumed,” she says with a smile. When I ask if they’re safe, she simply says, “People shouldn’t go to extremes. If it hurts, take it off.”

The big question: Do waist trainers work? While you’re wearing one, sure. Bray says a just-uncinched waist will stay shaped “for a while” in a longtime corset wearer, but she won’t hazard a guess at how long. “Everyone’s different,” she says. “But eventually the body will go back to normal.”

As for me? My ribs are bruised and tight waistbands in general make me grouchy. So it’s probably just time to go off sugar and up my ab workout.