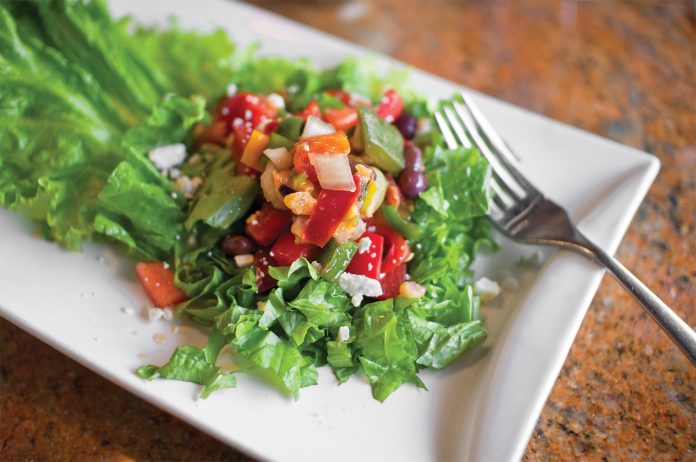 Two East Sac restaurants recently did something highly unusual: One looking to expand, the other to downsize, Formoli’s Bistro and Gönül’s J Street Cafe swapped locations. After the dust settled, I checked out the two new spots. Formoli’s transformation was jarring. Known for its cozy intimacy and open kitchen that served as the focal point and heartbeat of the teeny restaurant, it is now housed in a much larger space with high ceilings, cold tile floors and a kitchen tucked neatly behind a wall so only the chefs’ faces are visible. The new space has deep plum and dark blue walls, a chocolate-brown ceiling and shiny black tables that together lend an almost morose feel to the place. An attractive chandelier contributes some much-needed light, but the space is undeniably dark and somewhat oppressive during the day.

I felt the very essence of Formoli’s had been left behind in the cramped, colorful little space that Gönül’s now occupies. The result: an anonymous-feeling restaurant that lacks distinct character. However, the good news is that Formoli’s food has made the transition nicely, and several enjoyable meals convinced me that, despite the altered ambiance, Formoli’s is still well worth visiting.
The kitchen’s whiskey burger enjoys an almost cultlike status among the city’s carnivores, who wax poetic about its girthy, pepper-encrusted patty, flavorful whiskey demi-glace and habanero aïoli. It’s as delicious as ever, and one glance around the place shows that a lot of people are still coming in for that single dish.

But there are other worthy choices, such as the succulent seared scallops, served with a generous daub of sweet potato purée and an assertive watercress and endive salad, and the hefty, tender pork osso buco, swimming in a creamy goat cheese polenta that I was tempted to lick off the plate when no one was looking. I also admired the kitchen’s pretty, pesto-infused eggplant portobello napoleon, layered with Asiago cheese and arranged atop an intense balsamic reduction.

The steak frites, however, was odd: The beautifully pan-seared flat-iron steak was smothered with tangy pickled beets and red onions punctuated with a large chunk of raw jalapeño pepper. The ensemble simply didn’t make sense to me, and I eventually pushed the pile of pesky veggies aside to relish the meat by itself. I also was perplexed by the fat, American-style fries, which were not the skinny, French-style fries I expected. They were crispy and acceptable but lacked panache. Gönül’s, which left its roomy J Street location for something much smaller and more personal, has yet to establish a solid identity. It’s now called Gönül’s Vanilla Bean Bistro, a name that does little to convey what the restaurant has to offer.

Gönül’s menu is short, with an eclectic lineup of Mediterranean-inspired dishes. My experiences there were very uneven, though several dishes shone with freshness and flavor. Among them was a lovely house salad, scattered with rose petals, that contained tiny chunks of melon, heirloom tomato and feta cheese, and a stunning chilled melon and heirloom tomato soup embellished with jalapeño and mint—a real palate-dazzler.

But I found many of the dishes saturated with sweetness, from an earthy Moroccan lamb stew, punctuated with dates, apricots and raisins, to a crusty bowl of rice with a generous amount of Meyer lemon and orange preserves. The kitchen’s comforting turlu—a stewlike dish with bits of chicken and small meatballs—was a rustic pleasure, though it, too, had an underlying sweetness that forced me to put my spoon down long before I wanted to. And a fragrant curried lentil soup offered little respite from the bombardment of sweetness. Fortunately, a dollop of yogurt on top provided a welcome tangy foil. Zucchini and corn fritters drizzled with Dijon yogurt sauce were tasty but disappointingly tepid. And there were two dishes I simply wouldn’t order again. One was zekiye, a Turkish calzone stuffed with fingerling potatoes and mascarpone cheese. When it arrived, I was astonished to discover that its exterior was barely cooked, while the rest of the dough remained gooey, stretchy and completely raw. And the fist-size butternut squash ravioli, napped in an aggressive sage cream sauce, were so dense and overpowered by the sauce that I couldn’t taste the delicate filling.
Gönül’s small space looks much the same as it did when it was Formoli’s, though a lively mural has been added to one wall and the light fixtures have been changed. But the new restaurant lacks the vivacity and character of Formoli’s, whose discarded personality lurks like a sad ghost in the reclaimed space.