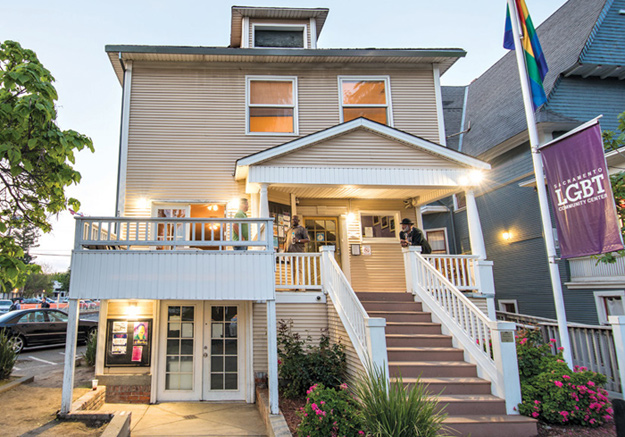 AS AN UNDERFUNDED NONPROFIT WITH WILDLY FAR-REACHING SERVICES, Sacramento’s LGBT Community Center tries to be all things to all people, even if only to reach a few.

“The LGBTQ community is everyone,” says Lanz Nalagan, the center’s development manager. (The initials stand for lesbian, gay, bisexual, transsexual, queer.) “Everyone is part of our community, and no group or demographic is excluded, and as we progress as a society we realize our services are for everyone. A lot of the issues that we focus on are not necessarily exclusive to the LGBTQ community, and frankly a lot of our direct service clientele do not identify as LGBTQ.”

To many, the center, on L Street, is known as “that house across from the Merc,” and spotted by its large rainbow fl ag across the street from Mercantile Saloon. But it’s a misconception that the center waves that flag only for the LGBTQ community.

As a respite to homeless youth and provider of free HIV testing, the center—which opened in 1986 as the Lambda Community Center—addresses issues that disproportionately affect the LGBTQ community but that also affect our whole society. The center asks only that its clients affirm that community. In addition to providing health and homeless services, the center exists to strengthen community through advocacy and get-togethers such as holiday dinners and special events. Some of these programs might seem like just another social hour, but imagine having compartmentalized your truest self, or any part of yourself—having missed prom because you were afraid to come out of the closet, for example, or not being welcome to family dinners because you did come out. For some, the center’s Friendsgiving dinner is the difference between Thanksgiving alone or one surrounded by friends. We’ve come a long way, but it’s not like discrimination disappeared with the arrival of marriage equality. “I can walk down a street in midtown and people will still scream, ‘hey faggot,’ and throw a beer

bottle at you, even in the most affirming place in the city,” says David Heitstuman, the center’s executive director. More than just anecdotes, statistics cited by the center show that the LGBTQ community suffers lopsided rates of depression, suicide, disease and discrimination. Some 90 percent of transgender people experience workplace discrimination, and unemployment among trans men and women is twice that of the general population. More than 80 percent of LGBTQ youth experience bullying, whereas the national average among students hovers somewhere around 25 percent. Approximately 40 percent of homeless youth identify as LGBTQ. “Although pop culture projects a more progressive society, it doesn’t always reflect reality,” says Nalagan. “With shows like “Will and Grace” or “Modern Family,” it makes it seem like LGBTQ kids are accepted by family.” He says it’s not true, and that LGBTQ youth make up 40 percent of homeless youth, and “it’s because of family rejection.”

It’s not just rejection and discrimination the LGBT community faces. In March, the LGBT Community Center received death threats by mail. “The letters were fairly threatening,” Nalagan says, noting that the author expressed his intention to kill all LGBTQ people in Sacramento. “They were graphic, the language and descriptions,” adds Jacquelyn Foust, the center’s events manager. “But we know we’re effecting change because we’re making people angry,” she jokes.

Nalagan and Foust talk about the letters somewhat cavalierly, but aren’t they disappointed that they’re still dealing with this in 2018? “If anything,” says Nalagan, “it shows us that we have a lot of work (left) to do.”

So work they do. The center’s Q Spot offers daily respite from the streets for homeless youth, while providing access to Internet, meals, showers, clothing and other supplies, including tarps, toothbrushes, even pet food. This year, the center received a grant that allows emergency housing for victims of violence. At the request of outside groups including workplaces, churches and schools, the center offers courses, such as Queer 101, to help others better understand issues important to the LGBTQ community, and health courses, advocacy courses and training in suicide prevention. It also organizes social groups for LGBTQ seniors, women and youth in addition to support groups for people coming out or those living with HIV/AIDS. The center hosts 12-step programs open to the community. This month, the center will host Q-Prom on June 30, a prom experience for LGBTQ+ youth ages 13 to 20. In August, it will give LGBTQ community members an opportunity to have the camp experience they never had. Camp Camp in the high Sierra will feature activities ranging from archery and tie-dye to stargazing and campfire songs, but with the adult bonus of a boozy brunch.

The center, Heitstuman says, exists “to surround people with others who care about them and value them.” Especially for the homeless, he says, it is an opportunity to restore dignity in their day. “In terms of learning the plight of the homeless, I’ve learned a lot because I don’t come with that kind of experience,” says Nalagan, who is gay. “I was lucky. My family and I emigrated from the Philippines and moved to the Bay Area. We were Catholic, but my coming-out experience was relatively the best experience you could have. I had no idea that it could be far worse for other people. So now a large part of my job is sharing other people’s stories.”

The center’s dual mission is to provide services to a group of people while also changing the wider misconceptions of and attitudes toward that group. “It’s tied together,” he says.

According to Nalagan, as people’s lives are changed, they in turn are empowered to change the lives of others. A healthy community is where its members’ basic needs are met, thereby equipping and inspiring them to meet the basic needs of others. “A large part of our success is that the people we’re serving will do the same thing,” he says. Maya Steinhart doesn’t exactly have a coming-out story. “I’ve just always been fluid,” says the 17-year-old. “My family is really relaxed and open.”

Maya identifies as polysexual, and her family reinforced that her sexuality didn’t define her values. “It doesn’t matter who you are, what you do, as long as you do good things, they said,” she recalls.

At 13, she discovered Sacramento’s LGBT Community Center, where she learned that others’ coming-out stories weren’t always so easy. “(I decided) I should work toward making their experience easier and dedicate my time to improving our society on this issue.”

“We walk out to sooth our souls,” says Maya, “but we also create proposals.”

Through the center, she feels more empowered than ever, even though she’s not waiting to be rescued. She’s ready to rescue others. Rory Pilling, 15, came out as both transgender and gay when he was 11, after his depression worsened to the brink of suicide. “It wasn’t an issue of support for me,” he explains. “It was just this idea that LGBT people aren’t happy, and that when you get older you die—of suicide, of AIDS, whatever. You don’t get a happy adult life, and I thought I was doomed.”

Also, he was bullied. Students threw gum and wet paper towels at him while he used the bathroom, and teachers, despite his personal request, used female pronouns for him. Rory developed severe anxiety and panic disorder. “Every time I walked into school, I couldn’t breathe,” he says.

As his parents grew concerned about his emotional health, they discovered the LGBT Community Center and arranged for Rory to attend a youth group there.

Of that first visit, Rory says, “I felt closeness with people that I never felt before. I could just talk to other people about normal things. ‘Where do you go to high school? Yeah, school sucks.’ After group ended, I told my mom”—who’d waited four hours in the car—“about everything that happened, and she said she hadn’t seen me so happy or calm in three years.”

Ask Rory now, and he says the center is his second family. “Even if my parents, family or best friends don’t understand, the adults here would understand and help me. A lot of them have grown up when it was even less OK to be LGBT.”

Rory is no longer depressed, and he wants to advocate for other LGBT youth. “When youth are comfortable in your identity, change is imminent.” When Serina Correa, 34, was in high school, marriage equality was a distant reality. She attended Catholic school—is still Catholic, by the way—and was a softball-playing tomboy. “I was kind of a stereotypical lesbian without even knowing it,” she laughs.

At 14, Serina came out to her family, and though her family was “pretty religious, they were fine,” she says. “My grandmother said get good grades and don’t hurt people and you’re OK.” It was more difficult for her mother, who cried. “It wasn’t just her little girl turning into a woman but also realizing that she might get bullied, not have the traditional marriage.”

Afraid she would be kicked off the softball team or expelled from school, Serina secluded herself, struggled with depression and feared disappointing her family. “Everything they had they gave to me and my school, so I always felt I had to be that model child for them.”

At 16, Serina spotted the rainbow flag of the LGBT Community Center. She began attending youth group. “It was almost like therapy to hear the things that other people were going through.”

Not only did she meet people who remain friends almost 20 years later, but she also learned to embrace her identity. She credits the center with giving her strength to pursue college and graduate school, even a successful career with the Public Policy Institute of California. Today, she works with the center’s youth coalition in South Sacramento, and last year she co-founded a Latino giving circle.

“We each pledge $1,000 a year as well as our time and expertise to local Latino-led nonprofits,” she says. “There are two ways that I identify myself. I am Latina and I am a lesbian. It took years to be empowered and say that out loud and embrace it.”