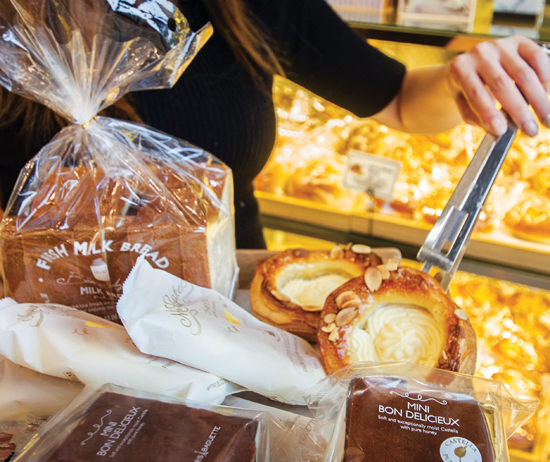 During my stint as a student abroad in China six years ago, I got hooked on 85°C Bakery Cafe, a Taiwan-based self-serve bakery. At 85°C, customers grab a tray and tongs and select their own food from the pastry cases while baristas focus all their effort on slinging coffee. More popular than Starbucks in China while I was there, 85°C offered a killer iced coffee and snacks that put all American coffee chains to shame. It quickly became my habit to show up to class each day with an 85°C Americano in one hand and a raisin brioche in the other. When I came back to America, I nearly went through withdrawal. The Starbucks on every corner taunted me. Where were the tongs and the squidink buns to go with my latte?

Blessedly, Sacramento is finally catching on to this whole selfserve-cafe thing. Pegasus Bakery & Cafe, a homegrown effort, popped up in South Sac a few years ago, making it the first of its kind in the area. Paris Baguette, a Korean self-serve chain, opened a location on Howe Avenue in early 2017. (It’s a franchise, owned by the local owners of several Blue Nami restaurants.) And just a few months ago, 85°C itself graced Sacramento with its presence, and I have yet to settle down about it. The appeal of the self-serve cafe is not quite apparent even to me, a lover of the entire concept. Isn’t the point of going out for a meal that everything is taken care of for you? But I do have a few hunches about the success of the self-serve model. First, as someone who absolutely must touch, pick up and fondle everything I walk past in a store (fuzzy sweaters, large ceramic objects, statement-piece jewelry, anything shiny), I appreciate being given the chance to poke at my food with tongs to check how it springs back, or to lift it and assess its density. As a person who also is the type to ask for “the second cookie from the back, yeah, the one with the extra chocolate chips,” this system allows me to pick the exact piece of food I want without coming across as annoyingly anal retentive to the shop clerk stuck serving me. Lastly, I can move at my own pace without worrying about holding up a line. If you need to circle through the displays three times before finally settling on a single taro bun, more power to you. (I will have cleaned out the entire supply of coconut twists by that time.)

While these chain cafes are similar at a surface level, each delivers its own spin on the basic lineup of Asian baked things filled with squid ink, shredded pork and red bean paste. Paris Baguette excels at puff pastry, cheesecakes and pots de creme while also offering a solid selection of panini and savory foods. Pegasus Bakery does more traditional Chinese desserts, including many of the cakes and cookies you could order at a dim sum house, as well as Japanese-style crepes. And my much beloved 85°C has a pan-Asian theme, with Chinese, Japanese and Korean desserts represented equally along with some French-inspired fare. Personally, I’m ride-or-die for their chocolate chip bowl, a loaf of chocolate chip-dotted milk bread with powdered sugar on top that I am fairly sure was supposed to be called chocolate chip boule but charmingly didn’t make it quite there in the translation.

These self-serve Asian cafes are making inroads into the Sacramento food scene. I have yet to go to Paris Baguette without seeing a crowd of Sac State students gathered together with pastries and bubble teas, for example, and 85°C has seemed no less busy during any of my visits. Of course, 85°C hasn’t made it to Starbucks status here. Still, a girl can dream.