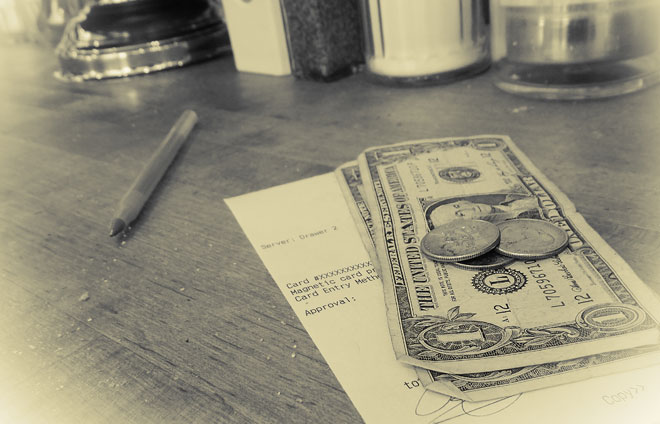 The new policy was designed to “level the playing field” between kitchen workers and servers, says Janel Inouye, who owns the restaurant with her husband, Ed Roehr. Magpie’s line cooks and dishwashers make $9 to $15 an hour; servers make $9 an hour plus tips, which add significantly to their total pay. “They can walk out with $300 in their pocket,” Inouye says.

To address that imbalance, the couple added a second line for gratuities to credit card receipts. One reads “Server Tip,” the other “Kitchen Tip.” Along with their check, customers receive a small yellow card explaining that the new policy is voluntary and suggesting one possible way to tip: 15 to 18 percent for service, 3 to 5 percent for the kitchen.

The early response from servers and customers was mixed, Inouye says. Waiters worried about their income dropping if diners merely redirect part of their customary tip to the kitchen, while some diners were confused or annoyed by the new tip line. “A few people don’t like it,” Inouye admits, “but for the most part, people get it.”

The new policy comes at a time of widespread national interest in economic inequality, with cities around the country (including Sacramento) considering raising the minimum wage. There’s also discussion in the restaurant industry about doing away with tips entirely and paying servers higher wages instead. “We’re just trying something new,” says Inouye, whose restaurant recently moved into new, larger digs in the 16 Powerhouse development at 1601 16th St. “We’re keeping our fingers crossed. It could be a little paradigm change.”