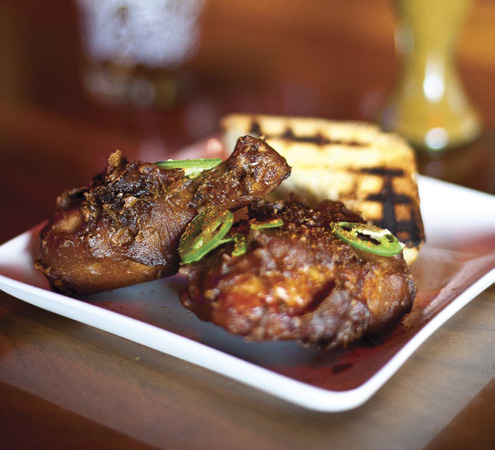 Who would have guessed that what Sacramento needed—really needed—was a tiki bar?

Tyler Williams, that’s who. The owner of Tank House got the bug a couple of years ago after one of his bartenders started hosting Tiki Tuesdays at the midtown barbecue restaurant. It was so successful that Williams and the bartender, Buddy Newby, decided to partner up and open The Jungle Bird.

They did some research, visiting tiki bars in San Francisco, New York, Hawaii, Las Vegas and LA and finding inspiration at places like Don the Beachcomber (the original tiki bar) in Huntington Beach and Pagan Idol in San Francisco, from the folks behind Bourbon & Branch. Along the way, they amassed an impressive collection of tiki paraphernalia.

Located in the J Street space occupied until recently by Kru, The Jungle Bird is, quite simply, a hoot. It starts with the decor, a kitschy melange of fishing nets, lobster traps, tiki statues and parrot figurines on perches dangling from the ceiling. The palm frond wallpaper is right out of Palm Beach circa 1950 (or your grandmother’s lanai from the same period). There’s tropical jazz from the ’30s and ’40s on the sound system, and servers dressed in Hawaiian shirts shout “Aloha” when you walk in the door. The bar menu—complete with helpful illustrations of each drink—is a flashback to a more innocent era. The drinks come in specialized tiki glassware (a plastic coconut for the pina colada, a parrot-shaped glass for The Jungle Bird), with old-fashioned accoutrements like paper umbrellas, swizzle sticks and orchid flower garnishes. Everything about the drinks screams “Fun!”

The place may be kitsch, but The Jungle Bird takes a serious, craft-focused approach to the cocktails. Local bartenders scrambled to get in on the tiki action. Baron Stelling, who won last year’s national Star of the Bar competition, is on staff, and big names like The Red Rabbit’s Chris Sinclair, The Waterboy’s Josh Hunt and Broderick’s Mike Mazzei moonlight here on their days off. The cocktails are a mix of classics (Don’s Zombie, the 1944 Mai Tai) and brand-new concoctions like the Bourb-icane (bourbon, passion fruit syrup, absinthe and sparkling wine) and Headhunters Grog (spiced rum, mezcal, lime and white grapefruit juice). And in typical tiki fashion, there are shareable drinks, like the Macadamia Nut Chi Chi for Two and the Volcano Bowl, which comes with long straws and a smoking grill in the center. Then there’s the Three Hour Tour: 136 ounces of vodka, rum and champagne (the equivalent of 15 drinks) served out of a large copper flamingo. Some of the drinks even come with their own sound effects: If you order a Bourbi-cane, the bartender hits a switch and the bar fills with the sounds of a tropical storm. Order the Three Hour Tour and you’ll hear the theme song from “Gilligan’s Island.” With The Jungle Bird, Williams and Newby pay homage to now-defunct Sacramento icons like Zombie Hut and Coral Reef. “It fills a void for people who grew up going there with their parents,” says Williams. “We want you to escape from the hustle and bustle of daily life. Walk in and you’re transported.”