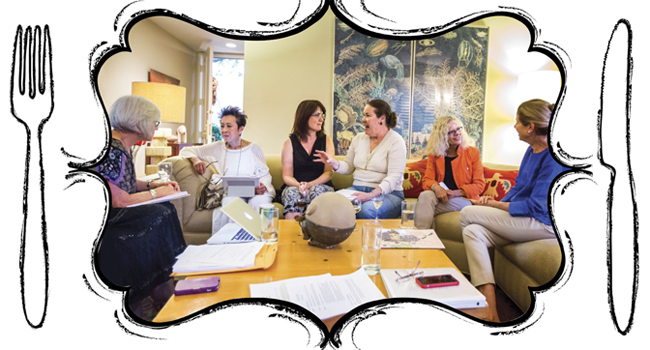 It’s not as if I’m disgruntled. As a longtime long-distance member of the San Francisco chapter of the prestigious, invitation-only Les Dames d’Escoffier, I’ve enjoyed hobnobbing with some of the Bay Area’s culinary lights—all women—since 2001.

For philanthropy, we volunteered to help preserve the Glen Ellen house where the legendary food writer M.F.K. Fisher spent her last years. We continue to support a gardening program for San Francisco County inmates and to mentor culinary students at City College of San Francisco.

After serving as chapter president in 2011, I remained on the San Francisco chapter’s board of directors. Yet I’d been growing restless. Like not enough salt in the stew, something wasn’t right.

Beginning in 1986 with my job as food editor at The Sacramento Bee, I spent nearly 30 years watching Sacramento mature as a food city surrounded by land that feeds the world. I’ve also watched countless women grow into inspiring culinary professionals. These women may be as talented as their male counterparts but don’t get their names in the media as often. Is it because women strive for ingredients beyond pork belly and bacon? Are we insufficiently bratty?

It’s important to accept that women are a big part of Sacramento’s culinary momentum from cowtown to farm-to-fork capital. We need cohesion, solidarity. Not out of anger or resentment that no women have yet led the Farm-to-Fork Festival’s Tower Bridge dinner, but for strength, recognition and parity. Besides, why should I mentor students at City College of San Francisco and not the stellar program at American River College, led in part by a savvy and spirited team of accomplished women chefs?

All I had to do was get through some bureaucracy and a chapter could be ours. And to explain Les Dames d’Escoffier to the prospective first members.

Les Dames, its shortened form, began in New York City in 1973 as a breakaway group from Les Amis d’Escoffier Society. The new organization was strictly for professional women. They called it Les Dames d’Escoffier (pronounced lay-dahm dezs-coffee-yay). The goal, according to Les Dames d’Escoffier International, was “to raise the image as well as the presence of women in food, wine and hospitality and help them get the training necessary to qualify as equal to men.”

Ironically, the group is named for a man. Auguste Escoffier was the first French chef to allow women in his kitchen. The women of Escoffier, grateful for the chef’s recognition, saw an opportunity for other men to note Escoffier’s open mind. Even at room temperature, gelatin would set faster than the effect this organization had on the status quo.

It will be interesting to see how the Sacramento group develops. This much I know: Every founder is a contributor, a participant, a doer. That’s why the Sacramento chapter was the fastest to form in the history of the entire organization. Most chapters take a few years to get going. Sacramento’s was created with all membership requirements, every significant piece of documentation including individual resumes, new bylaws, a sample budget and a slate of officers by the stated deadline in three weeks. We were ratified on Oct. 31 at the international conference held in Charleston, S.C.

In addition to raising the image of women in all manner of food industry professions, and helping women who hope to become part of that work, our chapter will hold fundraisers for scholarships. In two years, the annual conference for Les Dames d’Escoffier International will be in Laguna Beach. A strong Sacramento contingent will be there. That’s how we roll.

Elaine Corn is an award-winning newspaper food journalist and cookbook author, taking prizes in both Julia Child and James Beard cookbook awards. For nine years, she covered food for Capital Public Radio. She continues to write for The Sacramento Bee and teaches beginners how to cook at Sacramento Natural Foods Co-op.