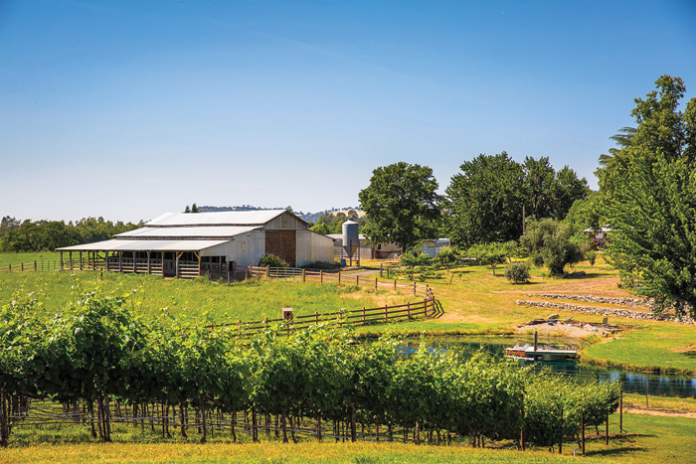 Wine grapes were first introduced into Placer County soil in 1848, the same year that gold was discovered at Sutter’s Mill, and by the end of the 19th century, the Sierra foothills sported more wineries and vineyards than Sonoma and Napa combined. Those vineyards were converted to orchards with the institution of Prohibition, and Placer County grew an identity as “the nation’s fruit basket.”

Placer County has been slower to reboard the wine bandwagon than other wine regions in the area. In fact, the Placer County Vintners Association was established less than a decade ago. However, Placer also offers one of the most refreshingly unassuming and intimate wine-country experiences you will encounter, with a bevy of family-owned wineries and small vineyards in a diverse series of settings.

Elevations in Placer County range from 500 to 6,000 feet, but most of the vineyards can be found closer to sea level. Although the region is best known for growing Zinfandel, Syrah and Barbera grapes, the warm Mediterranean climate creates ideal conditions for all kinds of varietals from Italy, Spain and Southern France.

If you’re looking for more than wine, the craft-beer scene in Placer County rivals that of Sacramento, with world-class breweries like Knee Deep and Moonraker, excellent bottle shops and beer bars like Final Gravity and Bar 101, and even a trio of farmhouse breweries.

Facts and figures: No. of wineries: 20; annual rainfall: 37 inches; most popular varieties: Zinfandel, Syrah and Barbera; elevation: 500–6,000 feet (although most vineyards are located lower than 1,500 feet above sea level).

Uniquely Placer
The Placer County wine scene is still relatively young, but the lack of an overarching identity gives winemakers greater freedom to forge their own identities. These four outfits show the complexity and variety of Placer County wine.

Bonitata Boutique Wine
Located inside the thick stone walls of the Bernhard Museum on the site of a winery originally founded in 1874, this Auburn winery offers a variety of sweet wines, from a light Moscato to a heavy Syrah Port. 291 Auburn Folsom Road, Auburn Casque Wines
Owner and winemaker Kevin Stevenson practices the French tradition of blending Bordeaux and Rhône-style wines together, and his rustic tasting room sits next door to The Flower Farm inn and cafe in Loomis. 9280 Horseshoe Bar Road, Loomis

Cristaldi Vineyards
For an escape to the Italian countryside on a day-trip budget, check out the wines and olive oils at this sprawling country estate in Loomis, which preserves the intimacy and quality of the experience by accepting tasting visits only by appointment. 4060 Ridge Drive, Loomis Wise Villa Winery
Winners of the Golden State Winery of the Year award at the 2015 California State Fair, this winery and Tuscan-style bistro in Lincoln nods to tradition while also embracing experimentation, including a series of “vinobrew” co-fermentation collaborations with nearby GoatHouse Brewing. 4200 Wise Road, Lincoln

Spread the Love
The Placer Wine & Ale Trail sprawls across the entire county, with each area boasting a unique flavor and history.

Auburn  The lovingly preserved brick buildings of Old Town Auburn look back to the town’s Gold Rush roots, but the seasonal menu and loaded wine list at Carpe Vino (1568 Lincoln Way) look ahead to the farm-to-fork future. If you want a winery experience, check out the 8-acre Vina Castellano vineyard in the Sierra Foothills. 4590 Bell Road Lincoln  Rancho Roble Vineyards (340 Fleming Road) specializes in estate-grown Barbera grapes, and although it offers affordable tastings and group rates, you can also reserve a private tasting session for a more intimate and educational experience. To finish the day off with a classy yet filling meal, hit up High Steaks Steakhouse inside Thunder Valley Casino. 1200 Athens Ave.

Loomis  Sustainable viticulture practices rule the day at Secret Ravine Vineyards (4390 Gold Trail Way), where tastings cost $5 per person, although that fee gets waived with a bottle purchase. If you build an appetite, don’t miss LBB Gastropub & Smokehouse, an offshoot of Loomis Basin Brewing. 3640 Taylor Road

Newcastle  Translated from Italian as “gift from heaven,” Dono dal Cielo (6100 Wise Road) started in 2002 with 6,000 Zinfandel vines but has since expanded its repertoire to include white wines and a Petite Sirah. Keep the Mediterranean vibe going at nearby La Fornaretta, famed for its authentic Italian-style pizzas. 455 Main St.

Farm Brews
Traveling partners often split their preferences between wine and beer, with one preferring the rustic elegance of the wine world while the other yearns for the unpretentious experimentation of the beer sphere. There’s no need to choose between wine and beer in northeast Placer County, as three legitimate farm breweries now operate among the wineries along the winding roads between Lincoln and Newcastle.

GoatHouse Brewing Co.  While farm breweries thrive in regions like New England and upstate New York, there were few West Coast precedents when Bay Area refugees Catherine and Michael Johnson opened GoatHouse in 2013. Longtime homebrewer Michael and tech-industry veteran Catherine now grow more than 2 acres of hops, enough to put some in every beer served out of their renovated barn tasting room. But perhaps nothing defines the urban-rural blend of GoatHouse better than the monthly goat yoga classes. 600 Wise Road, Lincoln Hillenbrand Farmhaus Brewery  Patric Hillenbrand had already been hosting weddings and other events on his camera-friendly Newcastle property when he decided to convert a 2,000-square-foot barn into a brewery and tasting room. Never a big beer fan, Hillenbrand originally intended to hire someone else to brew, but he fell in love with the process while doing research. Hillenbrand went on to build his own brewhouse and has brewed every beer since opening in 2017, tailoring the recipes toward his own discriminating palate. Hillenbrand Farmhaus is also the official tasting room of Pruett Vineyard in Auburn. 5100 Virginiatown Road, Newcastle

Dueling Dogs Brewing Co.  It took the husband-and-wife team of Adriana and Earl Stephens nearly five years to convert a piece of their 10-acre property into a ferment palace and tasting room, but they finally opened to the public in May 2018. Licensed engineer and seasoned homebrewer Earl makes the beer, while Adriana crafts mead, cider and the mead-cider blend known as cyser. 3030 Barrett Park Lane, Lincoln