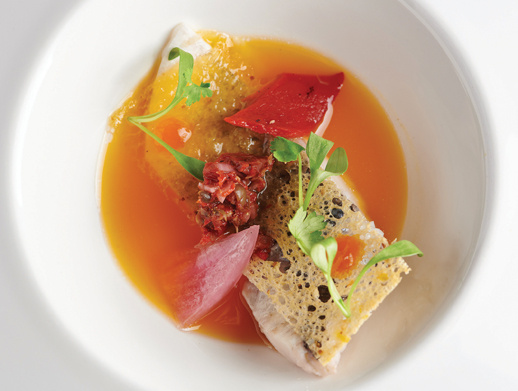 TRUCKEE—The main drag of this small mountain town is dotted with burger joints, beer bars and old-fashioned coffee shops, making it an unlikely location for a fine-dining restaurant. That didn’t stop John and Nyna Weatherson from opening Trokay, which serves the kind of elevated, high-concept cuisine you’d expect to find in a big city like New York or Chicago.

The Weathersons aren’t originally from these parts. John’s dad was in the Navy, and the family moved around a lot, eventually settling in Houston. There, John and Nyna met in high school and went to college together at the University of Iowa. While studying computer science, John worked in kitchens, and after graduation, a brief stint as a computer technician convinced him that he was meant to cook. He cooked at the best restaurant in Iowa City, soaked up everything he could, then enrolled in the Culinary Institute of America in Hyde Park, N.Y. He graduated at the top of his class, and the couple moved to New York City, where Weatherson worked for the legendary chef Christian Delouvrier and star restaurateurs David Bouley and Daniel Boulud. (Nyna, meanwhile, was head cheesemonger at Murray’s Cheese in the West Village.) After a couple of years, he felt it was time for something new. Weatherson came to Northern California to do short stretches in the kitchens at Redd, Cyrus and The French Laundry. He and Nyna drove to Lake Tahoe for a day of skiing at Squaw Valley. Passing through Truckee, they fell in love with a commercial property and decided to open a restaurant.

The first iteration was Trokay Cafe, a casual breakfast-and-lunch spot that served an ambitious dinner menu. It was a dress rehearsal of sorts for Restaurant Trokay, which they opened in 2013. At Trokay, Weatherson took the technical skills he’d learned from Boulud and Delouvrier and set out to find his own voice as a chef. For him, cooking is storytelling. He “writes” recipes, assembling flavors, temperatures and textures.

Weatherson’s 2018 iteration of his iconic dish, Fire and Smoke, with Mount Lassen trout smoked in juniper.

He wrote his first dish, Fire and Smoke, during the devastating King Fire of 2014, which shrouded Truckee in smoke. To convey the experience of the fire in culinary terms, he burned leeks and turnips into ash, which he turned into dehydrated meringue. He cured Mount Lassen trout in salt and smoked it in juniper wood foraged from Martis Peak, then froze the trout, grated it onto the meringue and topped it with whipped cream, stone-ground mustard and fried agretti, an Italian green whose fronds resemble fir needles. The dish was served under a glass dome filled with juniper smoke. The flavors were woodsy, smoky, rich and robust. “It was not a dish anyone else would write,” he says.

Weatherson, now 35, has created a unique, Sierra-focused version of farm-to-fork cuisine. A palate-cleansing first course called Snow and Ice features granita made from the citrusy buds of white fir. For an evocative dish called Walk in the Woods, Perigord truffles are “planted” into edible soil mounded onto an undulating plate that mimics the way the land rises and falls.

The idea of terroir is a constant theme in Weatherson’s cooking. He’ll heat a slab of Sierra granite until it’s at least 1,200 degrees and cook Kauai white shrimp tableside on the sizzling stone. Does the granite impart flavor? Maybe, maybe not. But it certainly tells a story.

Nyna works alongside her husband, doing the books, making the breads and overseeing the pastry department. She recently gave birth to their second child. For this couple, work life and home life are practically inseparable. After five years at Trokay, Weatherson thinks he’s found his voice as a chef. “This is my cuisine,” he says. “It’s like a knife in the table.” A Walk in the Woods features black truffles and edible soil and flowers; house-made biscuits, gougeres and grissini dusted with Tasmanian pepperberry are served in a metal tiffin box.