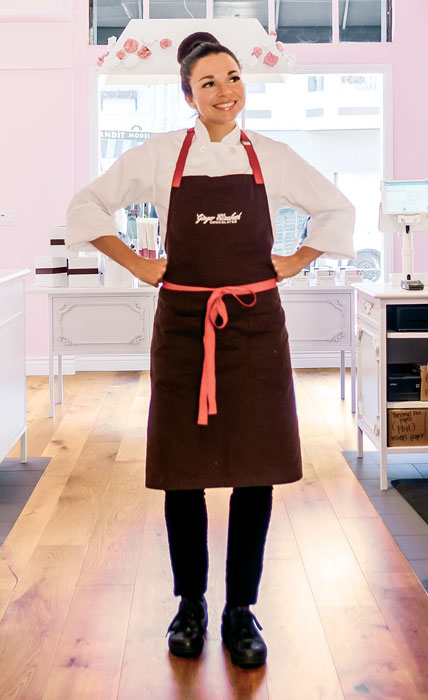 Bay Area chocolate enthusiasts can finally get a taste of what Sacramentans have been raving about for years: Ginger Elizabeth chocolates. The chocolatier held a grand opening for its long-awaited San Francisco boutique in February, and customers have been swooning ever since. The new location quickly earned a five-star Yelp rating in a food-obsessed city where everyone’s a critic—and a tough one at that.

The expansion was a dream come true for owner-chocolatier Ginger Hahn, who has steadily built a customer base so devoted that people will happily wait in long lines for her bonbons, macarons, hot chocolate and other seasonal goodies.

“It’s always been in our thoughts to go to San Francisco,” says Hahn, who waited for just the right location and timing before expanding beyond the flagship store in midtown Sacramento and a commercial kitchen in West Sacramento.

Hahn says that “95 percent of the products will be the same in the two shops,” but she noted early on some differences in customer preferences between the two cities. In Sacramento, for example, the salty caramel macaron is the hands-down favorite, but San Franciscans prefer the chocolate ganache macaron by a wide margin. “It is kind of funny to see the trends,” says Hahn. “People’s buying habits are a little different, but everyone loves everything. We already have regulars.”

She is looking forward to introducing Bay Area customers to her seasonal ice creams, which have earned a cultlike following in Sacramento. “I think that once we get the word out that we make our ice cream from scratch using local organic milk and local eggs, people will really love it.”

The new shop, on Fillmore Street in the Cow Hollow neighborhood, retains the Ginger Elizabeth brand’s signature brown-and-pink packaging and décor, but the space has a more traditional ambience than its Sacramento counterpart. Says Hahn, “It is modern and clean but with a lot of elegant touches,” such as blush-colored walls and intricate molding on the cabinetry. And with 200 square feet of additional retail space, it’s roomier than the original location. An 800-square-foot patio behind the storefront—a feature that sold Hahn on the property—will eventually undergo renovation.

Transporting products from the West Sacramento kitchen to San Francisco each day has been “extremely challenging,” says Hahn, but the effort has proven worthwhile. “It was a dream of ours to go to San Francisco, and you either take the leap or you don’t.”