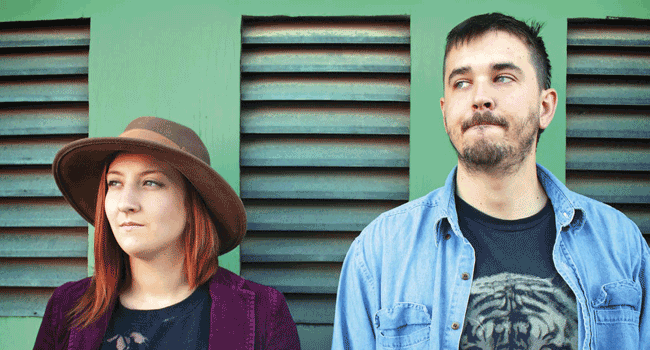 What’s in a name? For Geoffrey CK and Alexandra Steele, the answer is personality. That’s why they named their band Sunmonks.

The band’s debut EP, “In a Desert of Plenty,” reflects this sensibility: Romantic sunrise imagery on the sleeve envelops an album of slightly melancholic, harmonious and melodic tracks.

CK and Steele both grew up in musical families: Steele’s grandmother was a church pianist; CK’s mother did arrangements for the Mormon Tabernacle Choir. Individually, each has pursued musical outlets. Ten years ago, they formed an enduring musical and personal bond. While the duo is still the heart of Sunmonks, and they continue to write all the songs and arrangements, the band has expanded to include friends Dave Middleton (bass), Julian Loy (drummer) and Jason Ellis (guitar).

“What’s really hard is building a relationship with a human being and crafting something that I can’t do on my own, and they can’t do on their own. It’s greater than the sum of its parts,” says CK.

“In a Desert of Plenty” was recorded in lofts, basements, bedrooms and parents’ houses. CK calls it a snapshot of where they have been. (Some songs were written nearly eight years ago.) A forthcoming full-length album is a look at where they are going.

“We really want to make human music, which can be hard to do relying on loops and samples,” says CK of the album expected in late 2015. Like the EP, the album will be released only on vinyl.