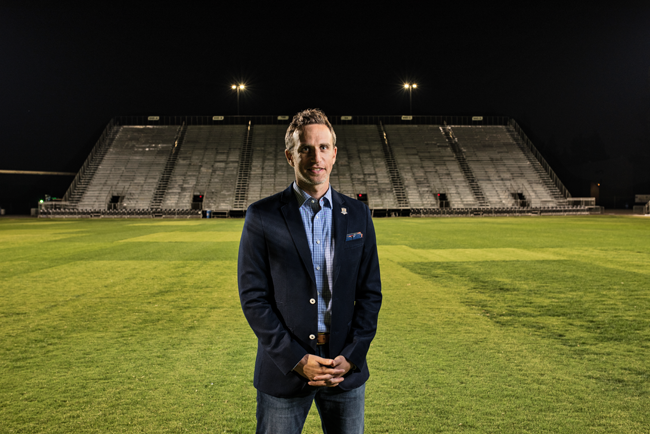 Imagine landing a job at the NBA headquarters in New York City and, within the first week, you’re assigned to a major project—one that requires you to analyze where the Sacramento Kings should move their franchise. Now imagine that you also happen to be a lifelong, diehard Sacramento Kings fan. Ben Gumpert found himself in this precarious position back in 2009. Personal conflict aside, he took on the challenge with full-court pressure and eventually parlayed it into a position as chief marketing officer with the Kings, helping get the Golden 1 Center built in Sacramento, where the team ultimately and deservedly stayed. Today, as Sacramento Republic FC’s president and chief operating officer, Gumpert has his eyes set on planting more sports roots in town as he and his team work tirelessly to secure a Major League Soccer bid.

What’s the latest status on the MLS naming new teams?
Their set intentions are to name two new teams in the near term. Could that bleed into next year? Sure. But we’re ready. We have a plan around a downtown stadium that we think is going to be far bigger than just soccer. We’re moving as quickly as possible, because we certainly feel that we have a very MLS-ready fan base, and our business community is ready and supportive. We have the right team, the right land, the right partners and the right local owners that show time and time again that they will step up and fight financially or in other ways to support the growth of this city.

About those fans: In what ways are they helping attract that bid?
We have 11,000 people that come out and sell out almost every match in our history, that beat drums for 90 minutes, that have fun with their family or share craft brews with their buddies, or bring their neighbors or grandpas or grandchildren—you name it. There’s a real community feel that’s fitting of Sacramento. That has nothing to do with our MLS prospects—that’s just about who we are. I think that’s what shocked people—including myself—back in 2014 when that first game happened at Hughes Stadium, and 21,000 people jacked up Highway 99. And then the next game they did the same, and the next game again. The rest has been history.

If—or when!—the team gets a bid, what can we expect to change?
It just gets bigger and better and broader. The spirit of the club won’t change, including the name—it just gets doubled down. We will also get more resources to help invest back in the community.

Aside from MLS efforts, what are your duties as president and COO?
I run all the day-to-day operations across the board. There’s the soccer side that reports to me and then the business side, like sales and marketing and operations. My job is to make sure we’re building the best organization, but very closely linked to that is to also be a cheerleader for Sacramento. I want to bring talent of any form or fashion here and help tell the story of Sacramento’s spirit and growth.

Being from Sacramento yourself, what does it mean to be a sports fan here?
I was 5 years old when the Kings moved to Sacramento. I remember going to my first game with my dad and becoming a fan instantly. It was very much a part of my identity. For 20 years, I lived all over the country, but it’s always something I hearkened back to. I would wear my Kings hat as a way to represent Sacramento. I’d love seeing someone else with a Kings hat on the subway in New York or going to a game on the road somewhere. I also lived in LA during the years of Webber and Vlade and Doug and Peja, when they had those battles. So I was going to Staples Center and getting yelled at. I was actually at Game 6 in 2002, which was a tough one that we don’t need to speak about. But there’s always been a level of pride, which is where “Sacramento Proud” came from.

Thinking back to your first assignment at the NBA nearly 10 years ago, did you ever think you’d be where you are now—in Sacramento, securing the success of yet another team?
I couldn’t have written a better story for myself. I got way too many fortunate bounces my way for that all to transpire. I think it also showed the possibility for Sacramento. One thing that the Kings’ fight showed was that as a community, we can actually do some pretty crazy things if we have the right vision. We don’t have to take a backseat to anybody.