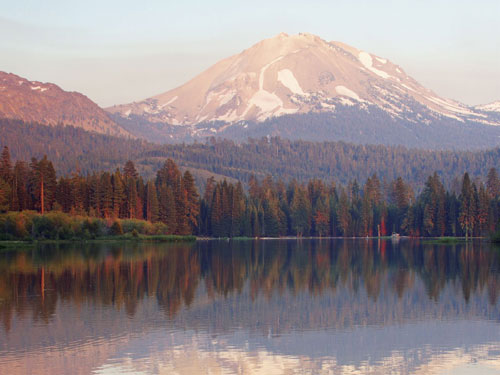 The chilly June Friday evening I checked into Highlands Ranch Resort, co-owner Wendy Rehberg cheerfully informed me that I had both good and bad luck. Unfortunately for me, I learned, a long hike in nearby Lassen Volcanic National Park I’d planned for the next day would be a no-go because of an abundant 15 feet of snow still blanketing the trail.

But on a buoyant note, Wendy continued, the roads nevertheless would be opening for the summer season the following day and, if history was any guide, there would be few visitors and cars this early in the year. Leading me to a framed map across from the reception desk, she pointed to where the hiking would be moderate and pleasant, with spacious views of lakes and peaks. As it would turn out, luck was indeed on my side, starting with this visit now to Highlands.

For years, I had thought to visit Mount Lassen. I had glimpsed it off in the distance while motoring on to other vacation destinations—to Lake Shasta further north and onward to majestic Mount Shasta. I’d spied it on an especially clear day hiking the Sutter Buttes. But the trouble with Lassen was lodging, or the lack of it. I didn’t want to camp, and I prefer a firm mattress in a cozy, airy room, preferably with good views, to any chain hotel. Nothing in the region seemed to satisfy my criteria.

Despite this, last year, I headed to Susanville to overnight before exploring Lassen Volcanic National Park’s less-visited eastern edge. I stayed in a sufficient yet characterless motel room and the next day drove on to Eagle Lake for a swim, then hiked across the haunting, barren landscape around Butte Lake, Cinder Cone and the Fantastic Lava Beds. Yet all the while, I imagined returning to Lassen someday to see the park’s western edge—if only, that is, I could find a cool place to bunk.

This year, the National Park Service is celebrating its centennial, and I’ve made it a point to see as many of the 411 parks across the nation as I can. Arches, Canyonlands, Sequoia, the Channel Islands, Dry Tortugas, Badlands, Glacier, Great Sand Dunes, the list goes on. Lassen beckoned, so close and yet so far. Therefore, when I read earlier this year about the newly opened Highlands Ranch Resort, situated a dozen miles from Lassen’s western entrance, and with just five snug cabins to reserve, I was intrigued. Wendy later told me that her partner, Kevin Wilsey, had spent summers in nearby Mill Creek. A contractor now based in Rocklin, he was keen to somehow return to the Lassen area. The opportunity came in 2010 when The Nature Conservancy put the ill-maintained ranch built on the Highlands property on the market.

The structure had been built in the 1970s. Using old photos of the ranch from a former lumberman who had worked in the area, Wendy and Kevin set about restoring it, removing siding and rusty nails, all the while committed to keeping as much original material in place as possible. The result is a masterful rustic abode, lodge and cabins both. At the same time, Highlands has a certain sophistication and panache. The seasonal young staff members from Europe and Asia I met during my stay were friendly and clearly delighted at the chance to spend a summer working in a mountainous paradise reminiscent of Wyoming or Montana.

After Wendy’s warm and informative welcome, I disappeared into my own private hideaway, which had two comfortable armchairs before a gas fireplace, a lush bed, and a jetted tub beside the front door, with a million-dollar view of a meadow, cows grazing and soaring peaks enclosing it all. Talk about luck. But I was still unsure as to what to do the Saturday after I arrived, since the park roads wouldn’t open until Sunday. I then recalled that on my previous trip to the region, I’d driven past Lake Almanor and had been struck by its emptiness and calm, particularly at the height of summer when I was there. While I sat at dinner in the resort restaurant my first evening at Highlands, I asked my waiter what he knew of the lake. Not much, he told me with a friendly laugh, but he was fairly sure I could rent watercraft there.

Then, a man sitting at a table off to my side—who’d apparently overheard all of this—approached me with his card for Knotty Pine Resort and Marina; he is the owner. Brett Womack told me I could rent a kayak, canoe, personal watercraft or motorboat. And, yes, I could swim there, too—the water should be warm enough, he assured me.

Early the next day, after a hearty eggs-and-sausage breakfast on the deck overlooking the meadow, I drove to the lake, dawdling first in tiny Chester to secondhand shop before approaching Peninsula Village on Almanor’s northeastern shore. The road from here to the marina weaves above the lake’s edge and among towering pines. Looking through them, I could see the water’s soft current and, in the distance, motorboats and other watercraft making wakes.

Soon after renting a kayak, I was paddling toward the deeper stretches of the lake, maneuvering around stand-up paddle boarders and cruising close to the pretty shoreline, with its modest, well-kept summer homes, fishing boats and canoes tethered to piers. Families picnicked nearby. At one point, I settled back into my backrest, balanced the paddle on my lap, closed my eyes and indulged in an aimless drift.

After returning the kayak, I bumped into Brett as he helped friends slide a boat off a ramp into the lake. He asked about my tour and I told him it had been nearly perfect. I only regretted that I hadn’t swum, assuming all of the beaches were private.

“They are,” he said, “but anyone would let you use their shore if you asked.” He then pointed to a secluded stretch of beach some 200 feet from where we were standing—his and his wife’s own—and encouraged me to take a dip. After wading in, I found myself amid a flotilla of Canada geese as I dove under, twirled about and waved at children back on shore as they galloped through the pines, two black Labradors at their feet, before the canines and all leaped in from a nearby pier for their own splashing about.

Later, I sat on the deck at Red Onion Grill & Bar, watching the sunset over the lake after ordering a portobello mushroom burger that came with perhaps the best sweet chipotle sauce ever. The lake was noticeably calm now, as were its shores, leading me to wonder whether Almanor was what Tahoe might have been like a century ago, with its remoteness, meandering empty roads encircling it, and its understated charm. Just before dark, I was back at Highlands, parked on a lush sofa in the spacious yet intimate lodge, and in time for Rickety Bridge, an acoustic guitar duo that outdid themselves with Beatles and Neil Young covers. On the way back to my cabin, I watched other guests hover around a fire pit, silhouetted against the twilight, a tranquil image set against the lonely peaks and quiet meadow.

I slept deeply that night, and after breakfast on the lodge’s sunny deck, I packed up my car and drove to the Kohm Yah-mah-nee Visitor Center at the national park’s southwest corner. There, I picked up a hiking map and bought some vintage park postcards marking the centennial to add to my growing collection. I took my time at curiously named lookout points, such as Sulphur Works and Bumpass Hell—at more than 200 degrees, the hottest hot springs in the world, and so named after the hapless Kendall Bumpass who fell through the shallow crust into a sulfur pool here in 1865. Driving on, I had generous views of forestland and other summits stretching to the horizon. I could see Eagle Lake off in the distance, where I’d been a year earlier, Lake Almanor (my newest and now favorite watery destination) and soft valleys and hills rippling toward the coast. I eventually reached Summit Lake, one of some 50 in the park.

Geologists tell us that Lassen is a young volcano. It’s also a mere shadow of the ancient volcano Tehama that once blanketed the region before collapsing in on itself 350,000 years ago. All the rocks in the park came from these volcanoes and are like immutable warnings of future eruptions. Later, I would read about John F. Loomis, a local businessman who filmed Lassen letting loose between 1914 and 1921, and how seismologists still monitor the area and say it’s not a question of if but rather when the next one will hit.

Call me optimistic, but none of this much concerned me as I parked by Manzanita Lake and pulled on my hiking shoes. I consulted a map to the foreboding Chaos Crags, my ultimate destination a semistrenuous climb some 2 miles from the lake. But first, rangers at the nearby entrance station told me a walk around the lake would take me an hour and was a pretty stroll, so I headed there first.

Shortly later, I was on my way to Chaos Crags, the park’s youngest lava domes. I first passed through dense forest, with some patches charred through, making the occasional sighting of vibrant snow plants all the more arresting. While passing two women hiking downward, I asked about the remainder of the trail till the crags, and they warned me about rocky terrain. Once I got there, they said, stop and look up.

What they were referring to was the forested edge of Chaos Jumbles, an avalanche that occurred 300 years ago along the Crags’ northwestern slope, which in effect dammed Manzanita Creek to form the lake I’d just visited. Remembering the women’s advice then, I looked up and saw the full glory of Chaos Crags, its dramatic and jagged peaks spread as wide as a Wagnerian opera stage set.

The climb was still steep, but I pressed on along the trail until I reached a crest, where I saw a sharp dip. I stopped to catch my breath and then glimpsed a nearly translucent lake at the base. It was an idyllic view, so much so that I had to steady myself by crouching on a boulder. It was, too, somewhat of a reckoning, the luck of seeing the lake here, as I later read it dries up in the summer. But here I was, once again, lucky at Lassen.