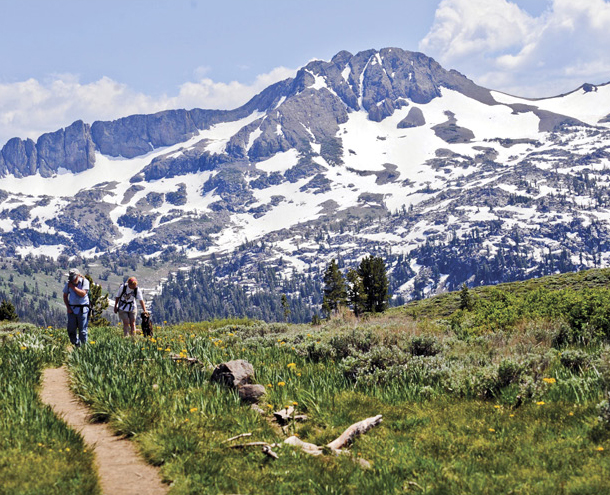 The Pacific Crest Trail (PCT for short) has been in existence nearly a century, but it took a best-selling 2012 memoir, “Wild,” by Cheryl Strayed, followed by an Oscar-nominated 2014 movie starring Reese Witherspoon, to bring it to the attention of the mainstream public.

The public can hardly be faulted for not knowing that much of the movie was filmed in Oregon, not California, as the script would have us believe. And those of us in the Sacramento area can be forgiven for not realizing that every time we drive up to Lake Tahoe, we whiz right past sections of the fabled path that threads through the Sierra Nevada on its 2,650-mile route from Mexico to Canada.

Strayed didn’t hike the High Sierra section of the PCT between Tulare and Plumas counties (a heavy snow season forced her to go around, just as many through-hikers will be forced to do this year), but each summer, thousands of day-trippers trek at least a few out-and-back miles on sections of the trail that intersect with Interstate 80, Highway 50 and Highway 88 in the Tahoe Basin. Here’s where to sample those close-to-home sections of the PCT. A heads-up: Some sections of trail may not be passable until mid-July or later due to the heavy snowpack, so be sure to check conditions before you go.

This 19th-century barn, part of the Meiss family homestead, is a popular subject for photographers headed to Showers Lake on the PCT north of Highway 88.

Carson Pass, Highway 88
There aren’t many places in the Sierra where day-trippers can step out of their cars and onto a trail at altitudes this high (8,650 feet plus), much less bone up on history, geography and wildflower identification right at the trailhead. The educational component is offered through the USDA Forest Service, which maintains a Carson Pass Information Station staffed in summer by Eldorado National Forest Interpretive Association volunteers. enfia.org; (209) 258-8606 for trail conditions.

From the information station, it’s an easy, 2-mile round-trip hike to Frog Lake along a family-friendly section of the PCT known for its lavish wildflower displays, which usually peak in early July but likely will be delayed this year due to snow cover. A side path leads for another mile to larger Winnemucca Lake. One steep, huffer-puffer mile beyond that is Round Top Lake, a popular picnic and turnaround point at the base of a 10,380-foot volcanic peak of the same name. The wildflower show on Carson Pass usually peaks around Fourth of July weekend, but this year, expect it to be late.

On the north side of Highway 88, the PCT trailhead is served by a parking lot that doubles as a staging area for equestrians. A popular destination and turnaround point is Showers Lake, 5 moderately rated miles from the road. This section of the PCT, a portion of which is shared with the Tahoe Rim Trail (tahoerimtrail.org), passes through lush, lake-pocked Meiss Country, defined by a bucolic valley that was farmed in the 19th century by the namesake Meiss family. From a ridge behind the lake, you get a gorgeous view of Lake Tahoe to the northeast and landmarks including Round Top, Two Sisters and The Nipple to the south.

Where to chow down after a hike: Kirkwood Inn on Highway 88, at the entrance to the ski area, dates from 1864 and is a California Historic Landmark with a lunch menu heavy on meaty sandwiches, chili, soups and salads. kirkwood.com Stepping stones facilitate a water crossing on a section of the PCT in Meiss Country off Highway 88 near Carson Pass.

Interstate 80
Numerous PCT options await PCT hikers traveling the Interstate 80 corridor. Easiest is a 4-mile round trip to Summit Lake from the trailhead at Boreal Mountain Resort (rideboreal.com). A tunnel leads under the highway from the south side to the north; after that, just follow the signs, being careful not to get lost in the maze of trails lacing the Castle Peak area.

The popular trek to the top of Castle Peak, an area landmark, can be accessed from Boreal or from a PCT parking area on the north side of the highway. It’s about 2.5 miles from there to the base of the mountain, where several strenuous side trails provide access to the 9,100-foot summit.

A second trailhead, this one just outside Sugar Bowl Mountain Resort (sugarbowl.com), rewards hikers with a series of rocky switchbacks climbing the flanks of Mount Judah. You’ll see Lake Mary below, Donner Lake in the distance and the route of the first Transcontinental Railroad emerging from a tunnel on Donner Summit. About 3 miles in, loop back onto the Mount Judah Trail for spectacular views from the peak’s 8,683-foot summit. Total hike distance is just under 6 miles.

Chow down: You could backtrack to Truckee and choose between dozens of eateries, but why bother when The Summit Restaurant & Bar, attached to the Old Donner Summit Lodge, is right there on Donner Pass Road in Soda Springs, just minutes from PCT trailheads and close to the entrance ramp for Interstate 80 and the trip back home? Load up before you hike with breakfast (weekends only) or relax at the end of the day with typical pub fare accompanied by a local brew and a decadent dessert. summitrestaurantandbar.com Cabins at the shore at Lower Echo Lake. A boat taxi runs from Echo Chalet to the PCT Desolation Wilderness trailhead at the far end of Upper Echo Lake.

Echo Summit, Highway 50
The scenic (and very popular) section of the PCT on the north side of the highway leads from Echo Chalet (echochalet.com), a summer-only marina and lodge, into Desolation Wilderness (recreation.gov), a 64,000-acre backcountry area characterized by glacially formed valleys and lakes. Wilderness permits are required even for day hikers; they’re free and can be self-issued at a trailhead kiosk.

The PCT hugs the shores of Lower and Upper Echo Lakes for about 2.5 miles, passing a string of lovely waterfront cabins, before reaching the wilderness boundary. On summer weekends, a water taxi shuttles hikers (and their dogs) between the chalet’s marina and the far end of the upper lake. (Tip: Take the taxi out in the morning to beat the rush; walk back alongside the lakes in the afternoon.) From the drop-off point, it’s a 3.5-mile, steep but stunningly rewarding trek to Lake Aloha, a sapphire-blue reservoir tucked into a rugged granite setting.

Getting there: Headed eastbound on Highway 50, pass the Sierra-at-Tahoe ski resort and continue 1.8 miles to Johnson Pass Road at Echo Summit. Turn left, drive a half-mile to Echo Lakes Road and continue to Echo Chalet. Don’t forget to register at the trailhead.

Where to chow down after a hike: There are lots of choices between Echo Summit and Placerville, but you owe it to yourself to check out Poor Red’s Bar-B-Q in the blink-and-you’ll-miss-it hamlet of El Dorado, just a few miles off the highway. The landmark roadhouse, originally a stagecoach stop from the 1850s, reopened last year under new ownership and has been drawing crowds (including lots of bikers) ever since. Barbecue, beer and an eyebrow-raisingly sweet cocktail called the Golden Cadillac are specialties. poorreds.com

Know Before You Go
Dogs: Required to be leashed in some areas but OK off-leash in others if sticking close to their owners and immediately responsive to voice commands.
Mountain Bikes and Horses: Mountain bikes are not allowed on the PCT, but horses, a traditional form of transport, are. Hikers encountering equestrians should step off the trail on the downhill side and verbally greet the horse and rider. (Saying hello lets the horse know you’re friendly and not a threat.)
Gear: It’s going to be muddy this season due to the heavy snowpack. Wear high-top, waterproof shoes and carry at least one hiking pole to probe the depth of any snow patches you may encounter along the trail. If targeting high-altitude segments of the trail, even in mid- July, you may (seriously!) want to bring snowshoes. Also, don’t forget the basics: snacks, water and sunscreen.