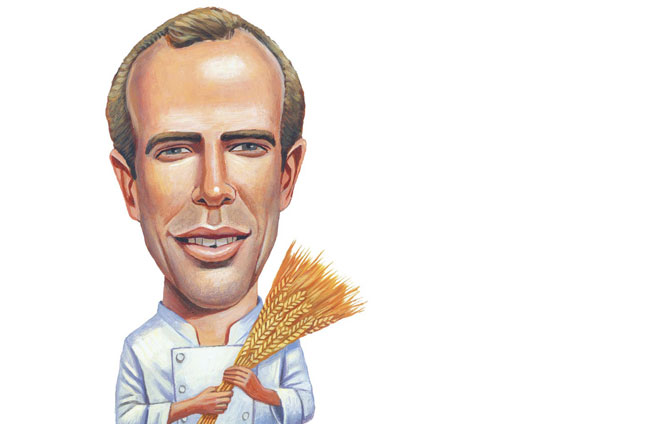 Sacramento Public Library recently named “The Third Plate: Field Notes on the Future of Food” its 2015 One Book selection. In the book, author Dan Barber questions the farm-to-fork movement and raises a red flag about the American way of farming. A James Beard Award-winning chef and owner of two acclaimed farm-to-table restaurants (Blue Hill in New York City and Blue Hill at Stone Barns in upstate New York), Barber will be in town Oct. 6 for a library event. He recently talked with us by phone.

Talk about what you see as the shortcomings of the farm-to-table movement.

I went to write about this old emmer variety of wheat from Klaas Martens’ farm in upstate New York. I looked around his 2,000- acre farm and saw buckwheat, barley, millet, rye and lots of cover crops— dozens and dozens of crops—and almost no wheat. At that moment, I realized that Klaas was growing this diversity to bring health and fertility to his soil, which would enable him to grow the wheat I was coveting for my restaurant. It was a very important early lesson. Here I was, the celebrated farm-to-table chef, and I realized the farm-to-table experience is about choosing the crops we most covet and forgetting about everything else that’s grown on the farm. Farmer Klaas lost a lot of money because there was no market for that diversity of grain that enabled me to chase this incredible wheat. I realized I had to change my cooking strategy and think about what is good food in a system that encourages us to cherry-pick the ingredients we want.

Here in Sacramento, some people complain that farm-to-table is elitist. For instance, a ticket to the Farm-to-Fork gala dinner costs about $200.

If you take that Klaas example, the wheat I was after is pretty elitist. What if we as chefs and eaters started to care about the lowly soil-supporting crops? It’s not the ticket for the dinner that should be offensive. The offensive part is that our culture demands a wheat that’s the equivalent of a Hummer.

How do you view the relationship between chef and farmer?

I would question if the relationship is simply one way. Is it about the chef saying what he wants and the farmer responding, instead of a relationship where the ecology leads, and the chef responds to the needs of the ecology? The chef should create really delicious, nutritious food from what the landscape wants to grow.

You write about foie gras. California has a love-hate relationship with foie. We ban it yet we crave it. Are we Californians crazy when it comes to foie gras?

I’m not so in favor of outlawing foie gras. I’m much more interested in the greater lesson of foie gras. It’s not really about the force feeding. Most foie gras farms that I’ve been to do gavage (force feeding) well, because it’s too expensive not to do it well.

Seventy percent of our agriculture is in grain production. About 90 percent of that goes to animals. That’s a very inefficient food system. Whether force feeding is cruel, I think you in California are off on the wrong tangent. What’s much more cruel is what 70 percent of bad grain agriculture does to the environment. That’s a much bigger issue than foie gras.

Are you optimistic about the future of farming, cooking and eating?

I am. What we’re talking about is based on deliciousness. It’s a wonderful way to be a part of a good movement. How many movements require you to give up something to get salvation or fulfillment? The environmental movement—part of the reason it’s not going anywhere is it asks you to give up things. The good-food movement is all about being greedy for the right thing.

We’re headed in the right direction. This is going to gain steam. We’ll look back in 20 years and see this was just the beginning. It’s a very exciting future, and it belongs to people who care about good food and flavor.

For more Farm to Fork coverage and to meet five of Sacramento’s farmer/chef pairs, pick up a copy of the August issue, on newsstands now.