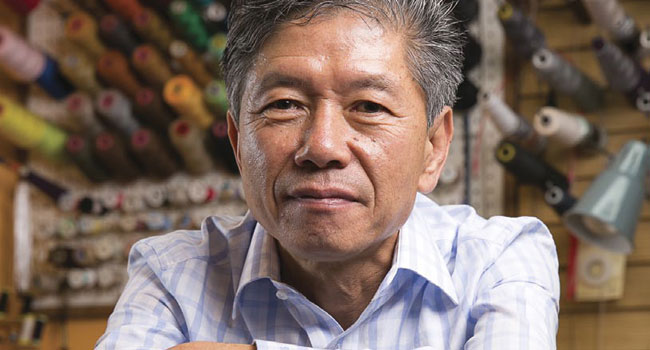 Chang grew up in Seoul, South Korea. After finishing high school in 1973, he spent three years as an apprentice to a master tailor. Much of the sewing was done by hand, even buttonholes. The work was painstaking and precise. “I would give something to the master and he would say, ‘This part is good, this part is bad.’ We had to practice, practice, practice.”

In 1985, Chang and his wife Sugie immigrated to Sacramento. “At that time, South Korea was not rich,” he says. “Very populated. It was hard to make it.” Chang is proud of his two sons, 27 and 24. “Here, there is more opportunity. I tell them, whatever you want to do, do it.” The oldest is in medical school at UCSF; the other is applying to medical school this year.

Chang has been a tailor long enough to see fashion as cyclical. Today, men’s suits are slim with narrow lapels—a throwback to the Mad Men era. “What’s in style now is kind of an old style they’ve copied,” says Chang. “But it’s not exactly the same. In the 1960s, pants had a higher rise in the inseam. The waist is low down now. And pants are more tapered—hemmed higher, at the anklebone.”

Customers come from as far away as the Bay Area for Chang’s craftsmanship. He’s known to offer fashion advice. Several years ago, most men’s pants had cuffs. “Now I’ll tell them, ‘No cuff.’” His main role, though, is to refine a customer’s clothes so they flatter and fit well. “Not everyone has a standard body shape,” he says, but “everyone wants to look good.” He smiles. “More slim.”—