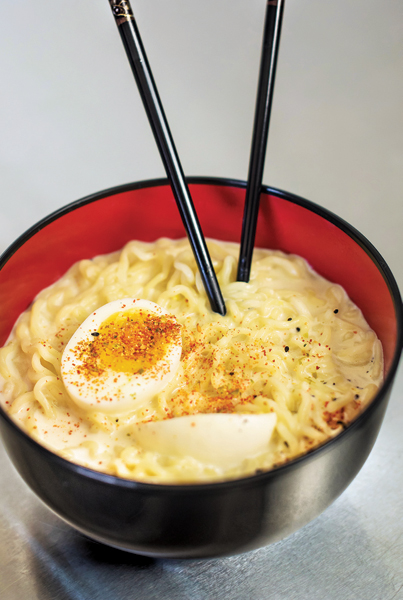 â€‹Great restaurants don’t pop up overnight. For creative and entrepreneurial chefs who lack the big-name buzz needed to secure investors or open a prime-time-ready restaurant, the path to achieving culinary freedom can be a bit more grass roots—or punk rock.

Noah Mansfield, chef de cuisine at Hook & Ladder Manufacturing Company, and Karina Martinez, a mixologist at The Jungle Bird and Bottle & Barlow, wanted to dig deeper into their passion for cooking and hospitality in their down time, but they didn’t feel ready for a brick-and-mortar operation. So they started Ramen Club 916, a supper club for friends and noodle lovers. Part pop-up, part speakeasy, Ramen Club 916 is an outlet for the two friends to tinker in the kitchen in ways they can’t at their day jobs. Since its debut in May, the invite-only club meets monthly at rotating locations in the city. Club members are asked only to donate a few dollars—or a pack of beer—since Martinez and Mansfield pay for each event out of their own pockets. While Ramen Club’s vibe is more like a house party than a traditional supper club (think PBRs on the table rather than glasses of scotch), the food is smart and serious. The menu for a recent meeting included bao stuffed with traditional Mexican braised pork and cold ramen with fermented ponzu, green garlic dashi, edamame, pea shoots, Thai basil and red miso.

For Mansfield and Martinez, the club gives them a chance to practice starting up their own fringe business. But it’s also a way for them to play around in the kitchen and make the food that they want to eat when they’re off the clock. That often happens to be a bowl of noodles. “The ramen in town is very traditional, but ramen is like a sandwich. You can do anything to it and there’s no correct form,” says Mansfield. “We’re going for experimental, and I’m making something that’s new to me every time.” Ramen Club is about more than just the food, however. As much effort as the two collaborators put into designing an exciting menu for each gathering, they are equally dedicated to cultivating a sense of comfort and community. “I think the word ‘hospitality’ gets lost in this world of star chefs and bartenders. This is hospitality in its truest form,” says Martinez of the club. “I don’t want anyone to think this is something pretentious and exclusive.” Guests mingling before the meal.

While these dinners currently remain invite-only, Mansfield and Martinez hope to build up enough notoriety to transition to opening to the public. They see a lack of this type of food presentation in Sacramento, and they see an audience that’s ready to support it if given the chance. “Sacramento is a really wonderful place with really wonderful people, and I think that getting out of your comfort zone and following passion projects is what builds a solid base for this community,” says Martinez. Mansfield and Martinez plan to hold their first “public” Ramen Club event this autumn, but tickets are expected to sell out quickly. Meanwhile, says Mansfield, keep your eyes peeled for the club to pop up at farmers markets or community gatherings. A Conversation With Nina Totenberg