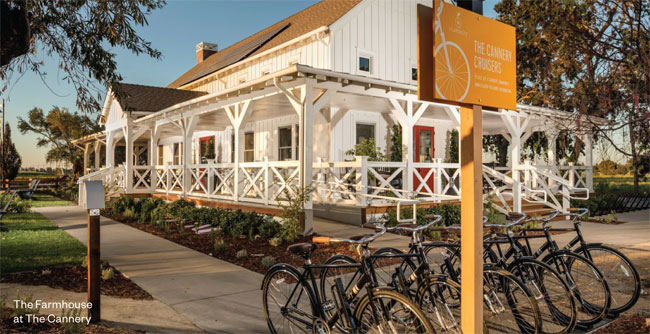 Agrihoods—the buzzword for housing developments built around small farms or community gardens—are cropping up in the Sacramento region, adding to a national trend toward integrating small-scale food production into urban and suburban neighborhoods.  At The Cannery, a largely upscale housing development in Davis where the sprawling 3,700-square-foot models are priced at just over $1 million, 547 new residences will surround a 7.4-acre farm operated by the Center for Land-Based Learning.  Meanwhile, The Mill at Broadway—an industrial infill project south of downtown Sacramento—will feature a 2.5-acre urban farm and teaching garden where residents and local schoolchildren can test out their green thumbs.

It makes sense that the self-proclaimed farm-to-fork capital would hop on the agrihood movement. After all, who wouldn’t love to live steps away from an agrarian utopia without having to sacrifice all the conveniences of modern urban living, like, say, late-night Thai food delivery or artisanal pour-over coffee?  But do agrihoods connect residents authentically to agriculture?  Or are urban farms in planned communities akin to golf courses or clubhouses—amenities devised by developers to sell an aspirational lifestyle to homebuyers? Will playing farmer on the weekends bring urbanites any closer to understanding the trials that farmers face? And why do we want farming to look tidy, as it appears in the sales brochures, instead of the muddy, sweaty aff air that it so often is? (Just ask a farm worker.) While critics of agrihoods cry greenwashing, the trend does speak to some genuine desire many of us have to connect to the land. And proponents believe that’s not a bad thing.  “There are so few people who are involved in agriculture. Less than 1 percent of our nation’s population is directly connected to the agriculture industry. So anything that we can do to bridge the gap between the consumer and the farmer is really, really important,” says Hallie Ochoa, director of outreach and education at Full Belly Farm in Capay Valley.

Ochoa argues that urban farms “can lead to consumers being more understanding of the plight that farmers are faced with.” For example, “when their small plot of kale or collard greens gets infested with aphids, perhaps they’ll be a little more sympathetic to what farmers go through on a larger scale.” Ochoa concedes that the Disneyfication of farming is “a fair concern,” but “if there’s a chance to have a place like The Cannery where people can be exposed to farming in a positive way, I think it won’t be anything but beneficial to the ag industry.”

Not Your Grandfather’s Farm

The Cannery, the new farm-to-table housing development in Davis, is all about the good life (dirt under the fingernails not included).

The Farm House, which currently serves as the development’s sales office, will become a public meeting space for the city of Davis.

The Barn is, well, a working barn where the farm’s operator, the Center for land-based learning, will store equipment and produce.