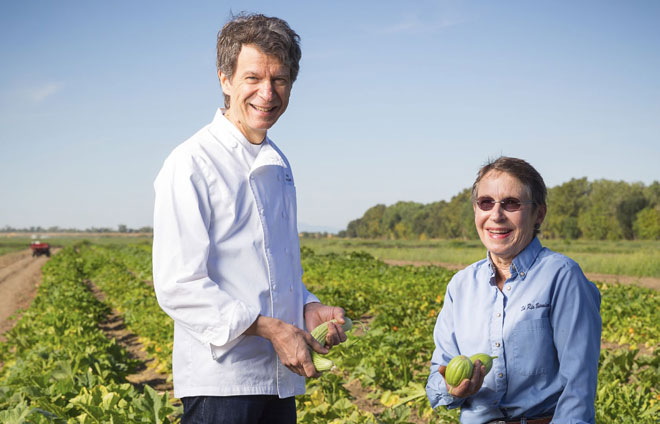 It’s 4 p.m. on a Tuesday at Formoli’s Bistro in East Sacramento, and farmer Susan Hanks has just dropped off a box of produce. Tucked in with the tarragon, thyme and oregano is a surprise for chef Aimal Formoli: a few pounds of loquats, still attached to the knobby branches on which they were growing in the Rio Linda sunshine just a few hours earlier.

Formoli pulls one of the small, apricotlike fruits off its branch and pops it into his mouth. A smile widens across his face. “Wow. That’s amazing,” he says. “So juicy.” By the time his first customers start arriving at 5:30 that evening, he’s already incorporated the fruit into his nightly special: braised pork with trumpet mushrooms and loquats, served on a crispy polenta cake.

Formoli and Hanks are emblematic of the relationship between today’s breed of chef and farmer. It’s less transactional and more collaborative. Increasingly, chefs and farmers see each other as partners in what ends up on your restaurant plate.

Take Kurt Spataro and Suzanne Peabody Ashworth. As executive chef for Paragary Restaurant Group, Spataro was an early adopter of the farm-to-fork movement. But as knowledgeable as Spataro is about food, he still drives out to Peabody Ranch in West Sacramento four or five times a year to learn from the woman he considers the master.

During a recent visit, Spataro follows Peabody Ashworth out into her fields to see what’s growing and find out how he might use it at his restaurants. A nationally renowned seed saver, Peabody Ashworth cultivates 20 acres of amazing diversity, growing rare and unusual heirloom fruits and vegetables that few people, even most chefs, are familiar with. Pointing out coriander that’s gone to seed, she pulls off some tiny green pods for Spataro to taste and tells him to think about how he might use them at Paragary’s Midtown Bistro, which recently reopened after a yearlong remodel. He thinks he might be able to pickle them as an accompaniment to cured fish, but he frets about a slight bitterness. “Does that change?” he asks. “As they mature, they’re less bitter,” Peabody Ashworth replies. Spataro met Peabody Ashworth about 15 years ago, when she had him out to the farm for lunch. The two clicked. Since then, he’s returned often, sometimes bringing employees to learn and be inspired. During one visit, Peabody Ashworth had him milk a goat just for the experience. “Every time I come, I learn something,” he says. Not all farmer-chef relationships are one of teacher and pupil. For Antonio Garza, the farm manager at Soil Born Farms on Hurley Way, and Shannon McElroy, head chef at Federalist in midtown Sacramento, it’s more like a pas de deux.

They met a few years ago while working together at Feeding Crane Farms, an innovative urban farm in Natomas. Last year, as he got ready to open Federalist, a hip pizzeria housed in a series of connected steel shipping containers, McElroy asked his old pal Garza to come up with a custom salad mix that would work with McElroy’s sweetish fig chili vinaigrette. “I wanted greens that were less bitter, more sweet,” McElroy explains.

Garza created a proprietary mix that included oak leaf, curly red leaf, mizuna, curly red mustard and deer tongue. “He nailed it,” says McElroy. “I tasted it and said, ‘This is what I’m looking for.’”

Sometimes, Garza leads and McElroy follows. For Federalist’s arugula salad, McElroy tailored the dressing to suit Garza’s assertive greens. “His arugula is the best in town,” McElroy explains. “It’s spicier and nuttier than anybody else’s.” So McElroy backed off on the pepper in the lemon wholegrain mustard vinaigrette. He also uses Garza’s arugula to make pesto for the Neapolitan-style pizzas and sandwiches.

Garza has more than a passing interest in cooking; he follows chefs on Facebook and pays attention to what’s happening in the food world. Out in the field, he thinks like a chef. He picks produce at what he calls “the right size” for its intended dish, selects leaves for loft and texture, and uses shade cloth to grow lettuces with just the right combination of tenderness and crunch. “Antonio understands cooking,” says McElroy. “I can show him my menu, say I need this eggplant or those onions, and he knows exactly what I’m looking for.”

At their scrappy urban farm and scrappy shipping-container restaurant, the two share an up-by-their-bootstraps, DIY ethos. As one grows and prospers, so does the other. In May, Garza helped McElroy build a garden on Federalist’s roof so the chef can harvest herbs and tomatoes this summer. Garza hopes to buy some land and start his own farm in the next year or so. McElroy promises to follow. “I’ll use Antonio as long as I’m a chef in town,” he says When Sloughhouse sturgeon farmer Michael Passmore first tried marketing his fish to local restaurants, he was, by his own admission, naive. Randall Selland, owner of The Kitchen, had discovered Passmore selling live sturgeon at the Sunday farmers market under the freeway downtown and bought the fish for his high-end demonstration-dinner restaurant. “I thought all chefs would be like Randall,” Passmore recalls.

Instead, they recoiled from the prehistoric-looking fish. One day, discouraged after a string of unsuccessful sales calls, Passmore slumped in a chair at Selland’s downtown restaurant, Ella. Head chef Kelly McCown joined him for a beer.

McCown, who’d earlier made a name for himself at Martini House in St. Helena, advised Passmore to set his sights beyond Sacramento and gave him a list of chefs in Napa. Passmore ended up selling his sturgeon to Meadowood’s Christopher Kostow, a James Beard Award winner with three Michelin stars under his belt. With Kostow’s stamp of approval, says McCown, “Michael was in the club.”

Within a few years, Passmore Ranch sturgeon was being served in some of the country’s finest restaurants, many of them Michelin-starred: The French Laundry (Napa), Benu and SPQR (San Francisco), Nico and The Publican (Chicago), Rick Moonen’s RM Seafood (Las Vegas). Meanwhile, top Sacramento chefs like Kru’s Billy Ngo also started sourcing sturgeon from Passmore.

In the process, Passmore and McCown became great friends. They discovered shared interests and a similar way of looking at the world. McCown began holding experimental dinners at Passmore Ranch, using it as an incubator where he could try out “wackadoodle” ideas that wouldn’t fly in any restaurant. For one event, the two men spit-roasted a 100-pound sturgeon, MacGyvering a rotisserie in Passmore’s garage. For another dinner, they created an edible tableau resembling a riverbed teeming with whole roasted sturgeon, blanched bass and fried carp. The two now are such good friends that when McCown moved back to town recently to help open Randall Selland’s upcoming Italian restaurant OBO, he bunked at Passmore Ranch.

McCown may have pointed his friend in the right direction, but he gives all the credit to Passmore. “Michael built his business,” he says. “I take pleasure in the fruits of his labors.”

When it comes to getting produce from farmer Susan Hanks, chef Aimal Formoli doesn’t want much input. “I’ve begged him to tell me what he wants,” says Hanks, owner of Hanks Hens and All Things Good in Rio Linda. He refuses. He’s happy to receive a surprise delivery like those loquats. “Don’t tell me,” he says to her. “Just do it.”

Hanks runs what she calls a “whole farm” on 2 acres, raising egg-laying chickens and growing tomatoes, beets, peppers, squash, sunchokes, herbs, mandarins, nectarines, pears and more. She’s known for her pristine produce, which she harvests and delivers the same day to Formoli’s Bistro and other local restaurants.

Once a professional photographer, Hanks turned to farming in midlife, but she still sees herself as an artist. To get a sense of what Formoli might want for his restaurant, she periodically eats at his bistro, sitting at the counter so she can watch the cooks at work. Once, she delighted in watching them roll out sheets of pasta dough studded with whole sage leaves she’d supplied. This summer she’s growing dent corn, which she’ll later grind into polenta for Formoli. (“Polenta works with his palate,” she notes.)

Formoli is happy to leave the growing decisions to Hanks. “Whatever she decides to bring,” he says, “we’ll take. She’s the expert.” At her tomato farm in West Sac, Heidi Watanabe maintains an open-door policy for chefs. She works with a lot of them, supplying produce to just about every notable restaurant in Sacramento. Ella. Kru. Grange. Esquire Grill. Mulvaney’s B&L. The Firehouse. Lucca. Biba. The Waterboy.

And Mother, Michael Thiemann’s vegetarian tour de force on K Street. Thiemann likes knowing he can go out to the farm whenever he wants. He doesn’t buy only tomatoes from Watanabe Farms. (Watanabe and her husband Clark grow more than 40 varieties on 7 acres.) He’ll take anything she’s got, even the wild stuff growing with abandon on the property’s edges: miner’s lettuce, chickweed, wild radish and arugula, wild blackberries.

Thiemann worked with Watanabe years ago as a sous chef at Mason’s and later as executive chef at Ella. She supplied the tomatoes for his wedding. Over time, their relationship deepened and evolved. In the early days, Thiemann says, “It was more about what I wanted. I was trying to dictate. I’d say I want a vegetable that’s 4 inches long. Bullshit like that.”

Watanabe sat him down with a seed catalog and broke down the economics of farming. Chefs, she told him, can’t skim off the cream and leave the rest for the farmer to eat. He got it. Now, he buys whatever she grows. “It’s a lot harder on their end,” he explains. “Farming is no joke.”

She personally delivers to restaurants, driving the truck herself and often working until 10 or 11 p.m. Thiemann loves when she brings her products in through Mother’s front door and unloads them in front of his diners. “Looks cool, huh?” she once said to Thiemann with a grin.

If basil will be ready for picking in a week, Watanabe gives Thiemann a heads-up so he can start thinking about ways to use it. He gets excited at the prospect of anything new. When Watanabe had a bumper crop of squash, he used it promiscuously—in an avocado-and-squash salad, squash-and-potato latkes, battered squash blossoms, a fried squash sandwich. “The nice thing about Mike is, he never complains,” says Watanabe.

That openness makes her more than willing to collaborate. Last year, Thiemann asked her to grow Jimmy Nardello peppers. She did. This year, she tripled her planting of the peppers.

“He’s not a customer,” Watanabe says of Thiemann. “He’s more than a customer. I don’t know a good word. He definitely has input.”