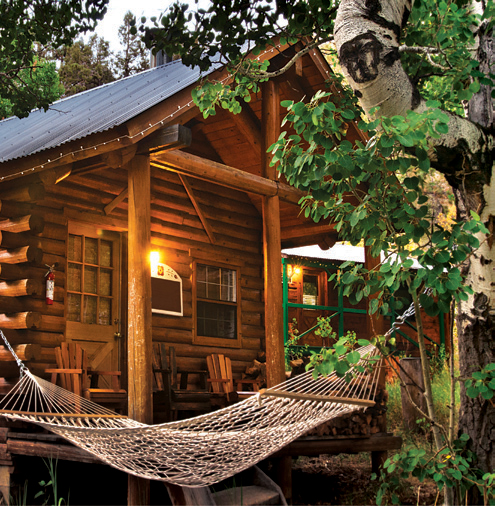 The world-renowned Alps are a staple on many a bucket list. But the so-called California Alps, which border stunning Hope Valley south of Lake Tahoe, are just as stupendous, and you won’t break the bank getting there, either. With just two people per square mile, and with 96 percent of the land set aside for public use, Alpine County has bragging rights to secluded lakes, killer peaks, grassy valleys and hiking amid steep canyons and through lush forests.

You can stay at Hope Valley Campground near the West Fork Carson River. Fisher folk will be pleased at the plethora of rainbow and cutthroat trout. At Sorensen’s Resort, more than 30 wooden cabins reflect traditional Scandinavian design and cater to singles, couples, families and groups. Some cabins have full kitchens, others gas fireplaces with kindling, or old-fashioned bathtubs, as well as porches, and a wood-fired communal sauna. The resort gift shop is well-stocked with hiking guidebooks, and the cafe serves noteworthy omelets, quiche, pasta, fish and steaks. Behind the resort, check out the 7-mile Popo’s Trail, which affords grand vistas of the valley from granite lookouts. A longer route from it leads to Pickett’s Peak. The 4.25-mile hike up to Sorensen’s Cliffs passes through groves of conifer and aspens and ends up at volcanic cliffs that overlook Hope Valley. In winter, Sorensen’s offers complimentary snowshoes to its guests. Cross-country trails sprawl across the area, and skis can be rented at Pickett’s Junction, where Highways 88 and 89 meet, at the Hope Valley Cross Country Center or at the Kirkwood Cross-Country Center. Alpine County prides itself on being a year-round vacation destination. Its hiking is optimal, with nearly 100 trails to suit all levels. Whether you access the trails on foot, ski or snowshoe, you’re certain to happen upon breathtaking views in every direction and, in spring, meadows and slopes covered in a riot of colorful wildflowers. South of Hope Valley and Highway 88, Kirkwood Ski Resort offers nearly 40 miles of groomed trails, as well as crosscountry and snowshoe tours and rentals. If it’s midsummer, consider a hike (nearly 9 miles) starting at Caples Lake, just to the northeast of Kirkwood, onto Emigrant Lake, where you’ll be bowled over by colonies of wildflowers. At Caples Lake Resort, you can rent boats. The fishing here is also fine with four trout—brook, rainbow, brown and mackinaw—for the reeling in. For a shorter hike (4 miles), head to Horsethief Canyon, so named after bandits in the 1850s who would prey on emigrants en route from the Carson Valley in Nevada. The trailhead is a short drive east of Sorensen’s. It starts out steep and switchbacks along a whitewater stream as it winds amid conifers and junipers before emptying into a valley awash in wildflowers.> Wolf Creek Restaurant. Photo by Traveling Without a Net.

STEP BACK IN TIME

At the town of Woodfords, check out the namesake’s Hotel, which was a welcome respite for weary travelers along the transcontinental Emigrant Trail and the Pony Express. It’s now a California Historical Landmark. Catch Highway 89 south for 6 more miles to travel back some 170 years to Markleeville. Established in the early 1860s as miners discovered the Comstock Lode, the town is a testament to exploration and settlement of the American West. The Alpine County Museum Complex, open from Memorial Day weekend until November, retains a restored silver ore stamp mill, a one-room school opened in 1882, a blacksmith workshop and a jail. Also on display: Washoe Indian basketry, mining tools, surgical instruments and photographs and paintings dating to the early 1900s. See Markleeville’s Old Courthouse, built in 1875, which is now the Visitor’s Center. Stop in at the old Fiske Hotel, reincarnated into the Wolf Creek Restaurant, serving house-made chili. The Markleeville Cemetery Trail, along Laramie Street, was restored in 2016 and is now the resting place for many of the area’s settlers. Four miles northwest of Markleeville, Grover Hot Springs State Park may be Alpine County’s most popular destination year-round. The rustic pool is set between a wooded hill and meadow, and although it is fenced, bathers have an ideal view to the pine-forested eastern slope of the Sierra. The springs once belonged to the Grover family of Markleeville, which owned a dairy and later opened a resort at the springs. The state bought the property for all of $12,000 in 1959. Many visitors believe the springs soothe and cure; the yellow-green mineral water is maintained at 102 to 104 degrees Fahrenheit. Grover also has a cool lap pool, changing rooms, showers and a campground. The nonprofit Friends of Grover Hot Springs have a Visitor Center and Gift Shop across from the park entrance. Before heading for a soak, check out the easy-to-moderate 4-mile Waterfall Trail, which is best traversed between March and October. You’ll pass through cedar groves and, depending on the season, the meadow is awash in wildflowers. In the colder months, if there’s enough snowpack, you can attempt skiing on the slopes opposite the pool.