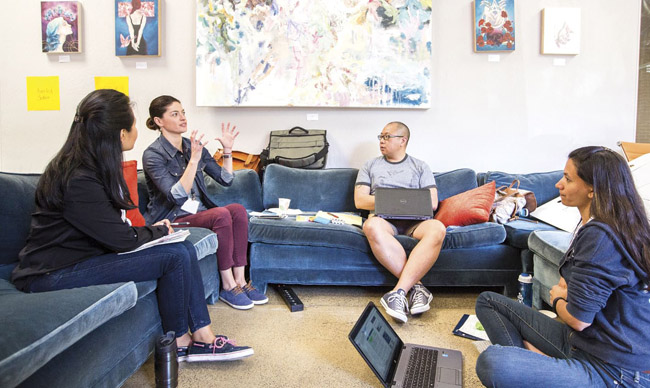 The startup scene that has been simmering in Sacramento for the past five or so years is coming to a full boil thanks to a critical mass of events, programs and work spaces dedicated to growing the city’s tech economy.

On any given day in the capital city, ambitious entrepreneurs can be found rubbing elbows (literally and figuratively) at a bustling coworking space, clinking pint glasses with fellow coders or attending a workshop on how to pitch their Big Idea to a deep-pocketed venture capitalist.

“It’s not Silicon Valley and it’s never going to be,” says startup adviser Laura Good, “but there’s a lot of support for startups here.” Case in point: Good and fellow startup cheerleader Jeff Bennett curate STARTUP DIGEST, an online calendar of events and programs aimed at helping the startup community thrive. Their weekly newsletter is the go-to source for tech workshops, conferences and meetups in the region.

One of the most popular local startup events is STARTUP GRIND, an intimate monthly gathering that Good describes as “a high-caliber, high-quality networking event and one of the best places to learn from others who are giving back to the community by sharing their stories.”

Another well-respected program is Hacker Lab’s STARTUP HUSTLE, an eight-week course for building entrepreneurial skills and soaking up the wisdom of successful mentors.

STARTUP WEEKEND, meanwhile, is a 54-hour adventure in creating a startup from scratch. “It’s a time for people to learn a lot and meet coders and developers and designers that they can form a community with,” says Good.

Of course, it isn’t all business all the time. BEER & GEEKS is a casual mixer where techies can network over a glass of pilsner. And let’s not forget TEDx SACRAMENTO, the largest tech-related gathering in Sacramento. While not aimed at startups per se, it is considered a must-go event by the city’s creatives and entrepreneurs.

TEDx organizer Brandon Weber is also the founder of THE URBAN HIVE, Sacramento’s most influential coworking space and a favorite gathering spot for the startup community. Weber asserts that coworking spaces have been pivotal to the growth of the city’s startup culture. “Events are great for meeting people, but there’s something about having a physical space to build community,” he says.

Good agrees. “Instead of having the founder of a startup working at home or at a coffee shop, it gives them a place to bring in team members or have casual interactions that you might not have otherwise,” she says. “I personally think the increase in coworking spaces in our area has really contributed to the visibility of the startup scene. They are essential.”

Weber and a team of partners are taking support for startups to the next level with I/O LABS. I/O Labs will cater to startups that have matured beyond the idea stage and need access to more office space, staff and professional services in order to grow.

Good is heartened by the number of startups congregating in downtown and midtown, saying that it’s evidence of a healthy ecosystem that will attract even more entrepreneurs to Sacramento. “The more startup founders you have in a smaller area,” she says, “the more you’re going to have the sort of serendipitous collaborations” that make for a thriving business community overall.