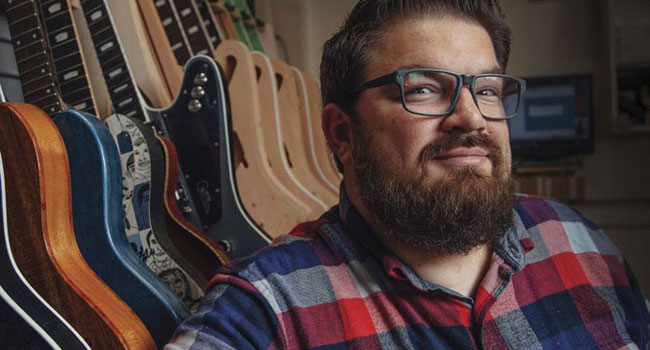 While working for his cabinetmaker dad, Elk Grove resident Doug Kauer thought it would be fun to make his own guitar. When the recession hit and no one wanted cabinets, Kauer had plenty of time to make instruments. Soon, he was selling his own line of high-end, custom electric guitars. Today, he has a staff of three and sells almost 100 guitars a year at $2,500 to $7,000 a pop.

What goes into a great guitar

Making guitars is a time-consuming, multistep process involving several machines and lots of handwork. The instruments start out as large pieces of lumber; Kauer uses mostly South American mahogany. “It’s lightweight; it’s resonant,” he says. “It’s got clarity of sound that you don’t hear from other variants. You can’t build a bad-sounding guitar out of it

Not available in stores

Kauer’s line includes The Banshee (a durable rock ’n’ roll guitar), The Daylighter (an homage to the Fender Jazzmaster but with a crisper sound) and The Starliner (Kauer’s answer to the classic Les Paul). “There’s not a lot of repeats in what we make,” says Kauer. “Fender will do a limited run of guitars—it’ll be 2,500 guitars. A limited run for us will be three.”