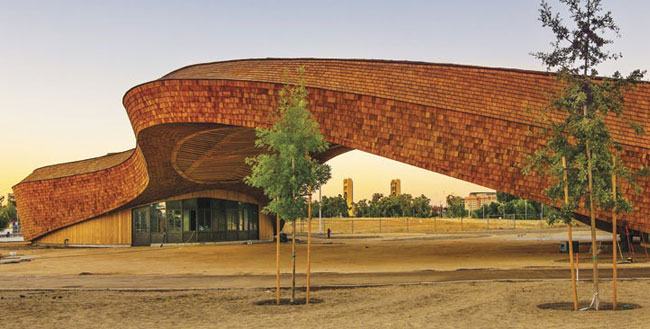 What is it? That might be the first question that springs to mind when encountering The Barn, the head-turning structure that recently sprouted up in West Sacramento’s Bridge District, an evolving neighborhood that boasts some of the area’s most ambitious architecture of late. Alas, the building’s indeterminateness is kind of the point, according to Stephen Jaycox, design director at Fulcrum Property, which developed The Barn. “It doesn’t fit into any sort of building typology,” he explains. “What’s exciting about that, of course, is that you take it for what it is and just enjoy it.”

The Barn is an event venue. And a restaurant. And a piece of art. And an elaborate shade structure. Most importantly, it’s an excuse to gather along the edge of a waterway that has shaped the region’s history, economy and culture.

“We want to bring people to the water’s edge because we think we can provide a revelatory experience,” says Jaycox. “It’s a beautiful thing that we have running through our city. We thought about just how wonderful it would be if it could be programmed as a social experience. There are just so few places that allow us to be at the water’s edge and also be in a social setting.”

It’s uncommon for a developer to take such a keen interest in building high-quality, design-minded public spaces. But Mark Friedman, Fulcrum’s president and a champion of innovative architecture, has made gathering places a focal point, rather than an afterthought, of his company’s projects. The Park Moderns, a cluster of single-family homes in the Bridge District designed by architect Mark Dziewulski, for example, emphasizes the experience of being outdoors even in the midst of urban density.

Fulcrum hired Jerry van Eyck of !melk, a New York-based urban design and landscape architecture firm, to head up the project. Where some would have started with a plaza as the basic form for such a gathering spot, the team behind The Barn used the experience of engaging with the river as the starting point for the design. Jaycox describes the building as having a “poetic dialogue with the natural environment.”

The Barn’s shape—Is it a bean? A wave? A bridge? A shell?—is designed more for what visitors can do outside its walls than inside them. That’s largely the reason that the structure is modest in terms of square footage but grand when it comes to providing shade. The serpentine canopy, which is anchored by two pods on either side, invites visitors to engage with the outdoors while simultaneously protecting them from the elements.

The region’s agricultural legacy influenced both how the space is used—a restaurant is the main tenant—and the materials from which the building is constructed. “We started calling it The Barn because there was an interest in working with the material of our agricultural heritage but making it relevant to who we are in the 21st century,” says Jaycox.

Clad in wood shingles evocative of a traditional farmhouse, The Barn feels familiar and yet not. “There’s always the possibility that because of its shape it might be intimidating,” says Jaycox, “but the materials make it approachable and humble in spite of its unexpected and worldly shape.”

The Barn’s unconventional silhouette might have been rejected outright by neighbors had developers attempted to build it across the river—Sacramentans seem to have an obsession with matching new development to existing architectural styles, which thwarts experimentalism—but West Sacramento embraced it. “Every project we’ve worked on in the Bridge District has benefited from the thoughtfulness and intellectual rigors and the way that the city supports economic development in their area,” says Jaycox. “Working with West Sacramento is just fabulous.”

Sustainable Sac: Getting the Kids to School