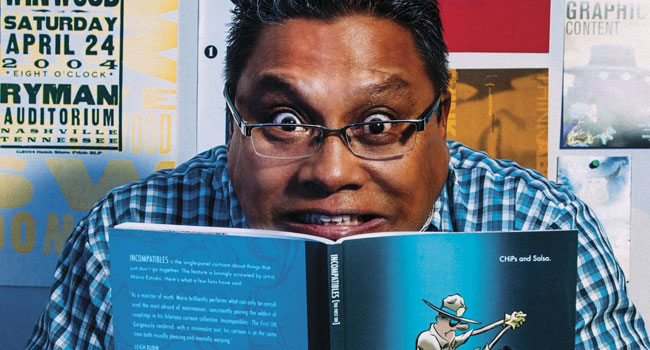 A Cartoonist’s Skewed View on Life.

THE ABSURDITY OF MODERN LIFE is the subject of “Incompatibles: The First 100,” a new cartoon anthology from Sac State graphic design professor Mario Estioko. Reminiscent of Gary Larson’s “The Far Side,” his single-panel cartoons offer an off-kilter look at everyday activities. One, called “Prey Dates,” shows a happy grizzly bear and an apprehensive deer watching as their offspring walk off together into the woods. Another, titled “Dropped Call of the Wild,” depicts a bear growling in frustration as he loses reception on his cellphone.

Estioko began doing his “Incompatibles” cartoons in the early ’90s while he was in design school. “It’s basically about things that don’t go together,” he explains. His early cartoons were straightforward, like “Sumo Wrestlers and Ballet” (enormous sumo wrestlers on pointe). In “Cokes and Jokes,” a man responds to a gag by painfully shooting cola out of his nose. Later panels are more sophisticated and thought-provoking. “Freudian Skip” shows the famed psychoanalyst skipping through a field of daisies. “Turduckow,” a riff on the Norman Rockwell painting “Freedom From Want,” depicts a grandmother serving her family a classic Thanksgiving turkey—except for the pair of cow hooves jutting out between its drumsticks.

Estioko gets his ideas “while I’m driving the car or in the shower or doing something repetitious like washing the dishes,” he says. Because they rely on the juxtaposition of two very different things, like a pair of California Highway Patrol officers dancing in a seductive clinch (titled, of course, “CHiPs and Salsa”), some gags take a while to perfect. “Sometimes I’ll just get half the joke,” Estioko says. “I’ll capture it on a Post-it note and see if it gets better with time.”

Estioko self-published his anthology with the help of a Kickstarter campaign, and he plans to syndicate his cartoons online as a weekly feature. But he views cartooning as a hobby, not a job. “I’m not expecting riches from this,” he says. “I can do this on the side and not have the pressure of doing it every day.” “Incompatibles” is available on Amazon.com and locally at Beers Books, The Avid Reader in Davis and Almost Perfect Bookstore in Roseville.