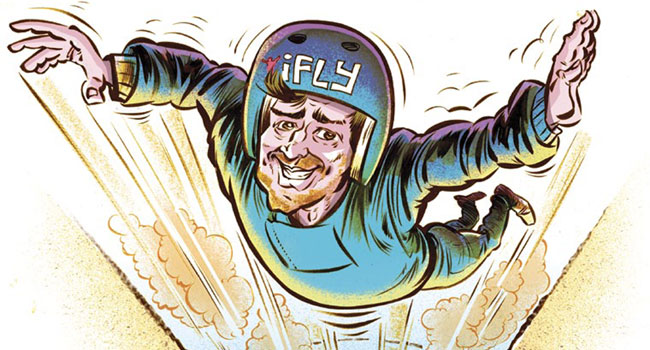 Look, I’ve always wanted to skydive. I just don’t want to jump from a plane 13,000 feet in the air. So when indoor skydiving company iFly opened in Roseville this past May, I figured I could handle a mere 12-foot wind tunnel.

Inside iFly’s complex, I was bulldozed by a wave of nostalgia. Something about the atmosphere reminded me of the laser tag venues I haunted as a kid, even the occasional roller rink, except here people were zipping up jumpsuits instead of lacing their skates.

Dominating the main room was the floor-to-ceiling wind tunnel, bordered by a saucerlike shape at its top. The room was relatively dark except around the actual tunnel, so with a “diver” suspended midair at its center, the whole thing looked like a UFO hauling somebody in with a tractor beam.

Before I suited up, iFly’s head flight instructor Charles Reid gave me the rundown on safety, mechanics and signals. A peace sign: Straighten your legs. Slight bend of the fingers: Bend your legs. Hang loose and just relax.

“That’s the best advice I can give you,” said Reid. “Just relax.”

Indoor skydiving is much more like aerial yoga than floating in a tank of water. Wind speed varies depending on the size of the flier, but it can range between 120 and 165 miles an hour. Reid would break up my flights into one- and two-minute intervals, but I had 15 total minutes to burn.

“If you can’t physically do that much time, it’s fine.” It sounded like he was comforting me.

Suits and helmets on, earplugs in, Reid and I entered the tunnel’s antechamber, where the roar of the wind surrounded us. My butterflies had already taken flight when Reid motioned to me and we dipped through the entrance into the tunnel.

Belly down, I struggled against the wind, forgetting the one thing Reid had told me to do: relax. The slightest movement sent my body wobbling, but with Reid’s direction, I soon began to balance.

While I was flying, everything faded into the background— time, noise, even the people watching. I became hyperfocused, straining to maintain posture, until Reid would lead me back to earth, where my body first felt light, then heavy, and then just plain hurt. If it weren’t for the look of pure joy on the face of the 7-year-old girl after me flying, I probably would have made excuses to get out of my last flight.

Then Reid gestured one last time, and once inside we locked arms, balancing midair, then corkscrewing the perimeter of the tunnel, rising and descending with the speed of a spinning top.

Until then, I hadn’t really let go, but in that moment, I finally found my center: zen. This was flight. Finally relaxed, I could see the smiles on the faces of those watching me, and I could hear something other than the wind screaming in my ears: laughter, childlike excitement, the sound of somebody having the time of his life, and it was my own. iFly Indoor Skydiving, 118 Harding Blvd., Roseville; (916) 836-4359; iflyworld.com. Prices start at $69.95.