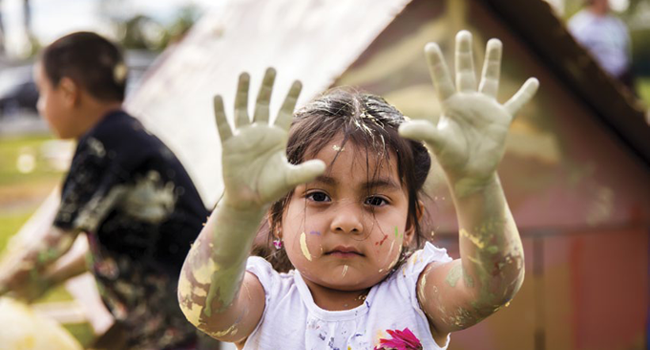 How and where children play today is a hot topic among those who believe that play is as important to a child’s development as eating green vegetables or learning to read. American children play outside far less than they did a generation or two ago. And when they do, it’s often through organized sports activities supervised by adults. Screen time has replaced a lot of outdoor play, while in some neighborhoods, kids stay indoors because there are no safe or appropriate places for them to gather.

What’s lost in this shift in play habits, some say, is children’s ability to confidently navigate their surroundings, interact cooperatively with other children and test their physical and emotional limits by taking risks.

Enter Fairytale Town, which, as a member of Sacramento Play Coalition, is spearheading the establishment of Sacramento’s first adventure playground this summer at Maple Neighborhood Center on Franklin Boulevard. Popularized in Europe, adventure playgrounds are child-centered spaces where kids can engage in unstructured, imaginative and even risky play.

“It’s meant to be a place where kids ages 7 to 15 can come without their parents and play in a way that’s much more child directed than a typical playground,” explains Kathy Fleming, executive director of Fairytale Town. Fleming envisions an environment where kids can get messy with paint, turn cardboard boxes into castles and build things with a hammer and nails if they want to. “Play workers” will be on hand to “provide guidance and instruction when kids need the help, but the thrust of it is to have the kids be involved in the creation of the playground and to let them use it how they see fit,” explains Fleming.

Mud- and paint-covered kids could be found happily digging holes with shovels, wrapping a play structure in yarn and crafting their own playhouses and costumes out of discarded boxes at a pop-up playground event designed to test out the concept in February.

“It is an experiment,” Fleming says. “We’re hoping that the response will be very positive and that it will be something that can be replicated in other neighborhoods that might not have easy access to play.”

Fleming points out that the sort of risky play encouraged at adventure playgrounds is different from dangerous play. A successful adventure playground is a place where kids can play safely but also stretch themselves by testing limits and making mistakes—and that has lasting value.

“If you’re always held back and you never get to experience failure, then you really are stunted in your growth,” explains Fleming, who was inspired by the adventure playgrounds she visited in England to establish one locally. “Failure is how people learn. Some great things come out of making mistakes. It’s how you grow and spread your wings.”

Fleming believes that spreading the message about the value of play to parents, many of whom “were also raised in a limited play environment,” will be key to the playground’s success. And a little letting go won’t hurt, either.

“Kids are smart, and I think we often underestimate what they’re capable of, particularly when they get to be 7, 8, 9 years old,” she says. “They know a lot and they can do a lot. If we keep protecting them and scheduling them, then they lose their spirit and their interest in the things they gravitate towards naturally.”

Three local spots where intrepid kids and their families can make discoveries, take risks and have fun:

Whether you’re cruising on a bike, hiking a scat-littered trail or fishing for bluegill, the parkway is the place for a build-your-own adventure.

Don’t let the safety waiver scare you off! Nothing builds confidence in a kid faster than the triumph of scaling a 40-foot wall.

Visit at sundown to observe the hair-raising spectacle of a quarter-million bats flying from their home beneath I-80.