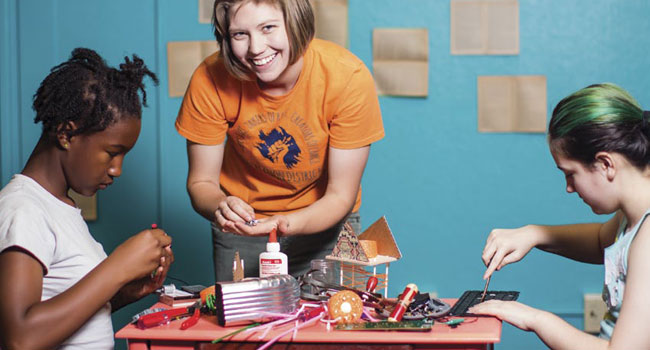 There’s a paint-splattered revolution afoot at the Fruit Ridge Community Collaborative in south Oak Park where The Creation District is headquartered. That’s where teens and young adults are coming for classes and camps aimed at nurturing creativity while achieving social change.

These are no ordinary painting or crafting courses, say organizers. The Creation District is about digging deep into the power of art in all its forms to address social problems. A recent session on subversive graffiti artist Banksy and guerrilla art, for example, explored the political significance of street art. A camp focused on literacy, meanwhile, culminated in building a pop-up library for an underserved community. The organization also offers a weeklong social justice course delving into the topic of homelessness, which includes the option to spend a night at a local shelter or on the street.

“We create a space where youth are empowered each day to speak up about social problems,” says Grace Loescher, the ebullient director of The Creation District. “We’re asking them to think critically about issues and draw their own conclusions and then go out in the community and create something: a poem, a performance, a painting. We want to give our youth a platform to have their voices heard. We encourage our youth to start thinking of themselves as change makers.”

The Creation District was developed by the same team that’s behind Art Beast, the popular open-studio workshop for young children and their caregivers in midtown, and Tubman House, which provides housing and other support to young parents experiencing homelessness. Together, the entities serve as a creative social entrepreneurship model for tackling complex issues facing the community.

Part of the genius behind The Creation District is that it is set up to attract young people from across the socioeconomic spectrum. “We believe that all youth, regardless of your income level or social status, should have access to a creative space and really high-quality programming, and they should be able to do it in the same room and around the same table,” explains Loescher

She adds that getting kids from diverse backgrounds into the same room to talk about and collaborate on solving social issues is an essential part of The Creation District’s mission. “We’re definitely challenging folks . . . to break that barrier and interact with a different group of people,” says Loescher. “We really believe that we each hold the power to create change by physically crossing that class divide.”

The organization also partners with schools to carry out social justice-minded assemblies, workshops and community service programs throughout the school year. Loescher and her colleagues hope to challenge schools and students to reconsider the log-some-hours-and-write-an-essay model of service that is typical in many schools.

“Service can’t be measured strictly in hours. It’s a lifelong commitment to sticking by someone’s side through the hard moments,” says Loescher. “We’re asking schools and our students to take on the challenge of making community service a meaningful and lasting bond though equality and a shared understanding of humanity

Here is a sampling of the programming for teens and young adults offered by The Creation District:

Living Fearlessly Through Improv: explores various forms of wisdom and empowerment that can be learned through improvisational theater.

Transformative Play: delves into the art of mindfulness and gratitude through different elements of play.

The League of Artful Citizens: a task force in which youth work on solving community issues by engaging with elected officials, holding demonstrations and shaping public policy.

What to Keep in a Go Bag

In Case of Evacuation