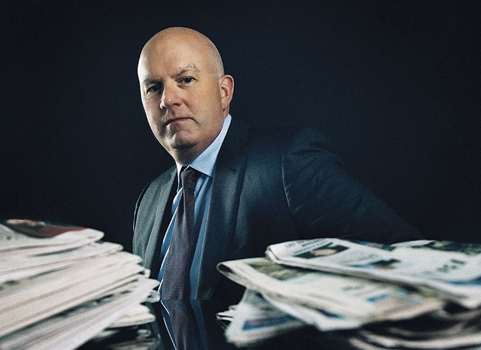 Three decades after he began his career as a correspondent for The Sacramento Bee, Tim Grieve is back in a new role: as the head of news strategies for The McClatchy Company. The veteran journalist, who worked for National Journal, Politico and Salon before joining McClatchy’s Washington, D.C., office last fall, is responsible for growing readership of the company’s 29 daily newspapers—no small feat in an era when print media organizations have struggled to find their footing online. “Fewer and fewer readers are clicking onto traditional news sources and exploring there,” explains Grieve. “Instead, they are out on social media and they’re finding things that have been pushed out to them there. We have to go out and find the readers where they are.”

On the relevance of newspapers today

“There will always be industries that fade away because people don’t want their product anymore. That’s not what’s happening to us. People still want what we produce. They still have an incredible appetite for news and information about their communities and about the world. The challenge is to figure out the business model that makes it work.”

On whether quality journalism can thrive in the digital age

“Great readership follows great stories. I don’t think that part has really changed. One example just from the time I’ve been with McClatchy is [Bee reporter] Cynthia Hubert’s story on Genny [Lucchesi], the homeless woman who died in Sacramento. It drove tremendous digital readership. It was a very serious subject, it was beautifully written, and it was quite long and a ton of people read it. This notion that you can only succeed digitally with pictures of cats and stories about the Kardashians is wrong, I think. There are examples all around us of great journalism driving digital readership.”

“Editors choose what we write about. But what’s different now is that those decisions are informed by readership metrics that we can see and understand. I don’t think there’s anything wrong with allowing that math to be a factor in your decisions about what kinds of stories to pursue. At the outer edges of that, of course, you can get some ridiculous results. Do we do a mix of really serious journalism and some lighter, entertaining things? Yes. But that is what we have always done.”

On the value of journalism in a democracy

“I think we all have a deep, deep vested interest in making sure there is strong journalism in each of our local communities. If that were to go away, it’s really hard to understand how local government could really function—and it’s really important that it functions. Without local journalism, how would you know who to vote for? How would you know whether those people are doing a good job? I think the answer is you wouldn’t, or we’d all have to become full-time journalists for ourselves, and I think most people have day jobs that make that impossible.”

On returning to McClatchy

“I was blown away by McClatchy when I started there as a 20-year-old intern at The Sacramento Bee during college, and I’m blown away by it today. There is so much amazing journalism that’s being produced all around this company and so many smart people working hard at figuring out how to make it work and succeeding at it. It’s an exciting place to come home to. I grew up in Sacramento and it’s a Sacramento company, which gives the job a meaning that it wouldn’t have for me otherwise.”