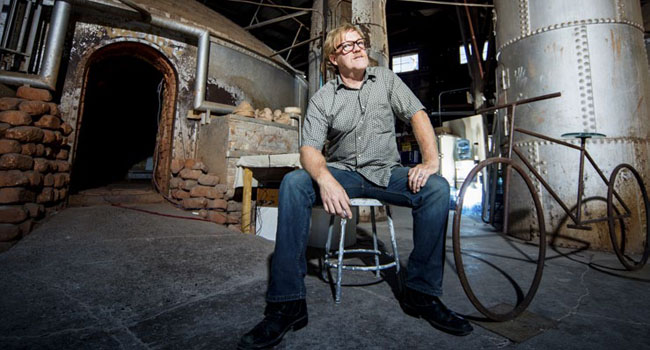 A half-mile south of Sacramento City College just west of the light-rail tracks, a large smokestack rises above an old warehouse with “Panama Pottery” painted on its wall. From 1913 to 1972, that company mass-produced pottery and ceramics, leaving behind a fine layer of clay that still covers much of the warehouse interior.

In 2006, Brick House owner Dave DeCamilla bought the warehouse and opened Panama Art Factory, a gallery and studio space that currently houses some 30 local artists. But it wasn’t until 2015 that Panama really found its groove, when DeCamilla invited artist Dave Davis—“you can call me Dave Dave”—to manage and curate the studio space. His first order of business: “to get as many different artists and mediums as I could,” he says. Previously home to mostly ceramic artists, Panama has since become an eclectic enclave of multimedia art, from spray paint to electronics, and fine arts to graphic prints. In just the past year, 10 new artists have made Panama their home.

Studios are found throughout the warehouse, tucked away in corners, hidden behind the massive kilns, in a neat row of rooms along a dormlike hallway. And everywhere you look, set against Panama’s historic backdrop, are works in progress: sculptures, paintings, ceramics.

Panama feels a bit like Art Hotel, the temporary art exhibition that ran for a week in February in the now-demolished Jade Hotel. It’s a no-holds-barred canvas where anything goes. “In Art Hotel, there were so many different types of artists, and contrast is what we’re about. I want artists to walk through Panama’s door and say, ‘I can do whatever the hell I want. I can do art,’” says Dave Dave.

“We want the stuff that’s not in any other gallery. I want every kind of strangeness, every oddity. The nontraditional artist is really welcome here,” he says. Like Art Hotel, Panama Pottery has cultivated diversity in close quarters.

“Matt Brown does animatronics and projected stuff, so it looks like a flea market in his studio,” says Dave Dave. “And next door is Leslie Thompson, who’s been doing ceramics for 30 years and has a piece in Oakland Museum.” Other Panama residents include Shaun Burner and Nina Jean Lynch, who both contributed to Art Hotel, as well as artists Miguel Paz, Alfredo Medrano and photographer Melissa Uroff.

Panama aims to remain accessible, both to artists (who can rent open-air space for as little as $125 a month) and the public. The space has had school tours and professional photo shoots, and its three rotating galleries are open to the public, including Second Saturday events. Panama also is considering offering classes. 4421 24th St.; (916) 452-7181; panamapotterysacramento.com

What to Keep in a Go Bag

In Case of Evacuation