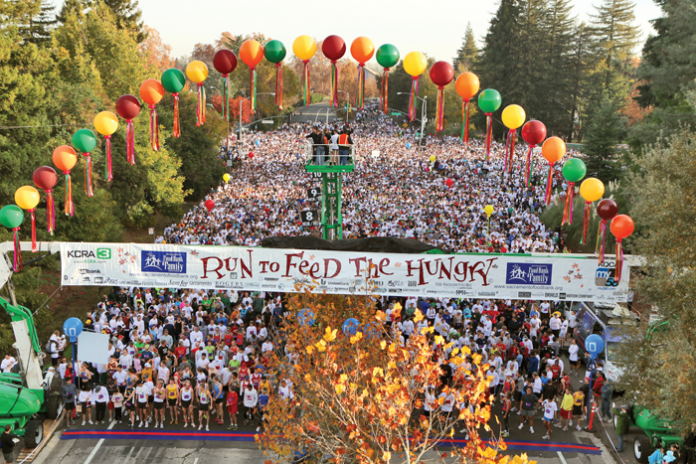 When Gaylord Walker pitched a Thanksgiving Day fun run to Sacramento Food Bank & Family Services in 1994, the idea of hosting a race on the holiday was a novel one. Sacramento Food Bank was skeptical—who wants to exercise on a day spent either in the kitchen or in front of the television?—but agreed to give the concept a chance when Walker, a local public relations specialist and casual runner, convincingly argued that an annual holiday race could net $50,000 for the nonprofit within five years.

The first Run To Feed the Hungry had inauspicious beginnings. Its debut saw only 796 participants, mostly local running enthusiasts and Food Bank supporters. But the Food Bank, which provides free food, education and emergency goods and services to community members in need, stuck with the plan. Within two years, the race was already pulling in the numbers predicted by Walker, and a Sacramento tradition was born.

Now approaching its 26th year, the run continues to grow, and race officials are anticipating that close to $1 million will be raised for Sacramento Food Bank this year. The first of its kind, the race has shown success that’s spurred on other cities throughout the nation to put on their own turkey trots—although Run To Feed the Hungry remains the largest in the country. 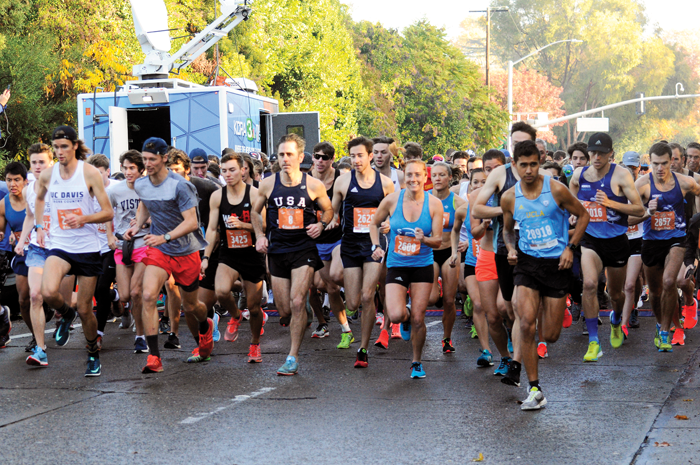 Split into a 10k and a 5k that loops through East Sacramento and midtown, the race is accessible for participants of a range of ages and fitness levels. “Some people call it Saunter To Feed the Hungry,” jokes Rich Hanna, race director. “So many people are out there to support the cause and enjoy one of the biggest events in Sacramento rather than just to race.”

The run is competitive, at one point in its history awarding winners with $2,000 for first prize and attracting participants from all over the world. But for all the accolades and national attention, the race continues to be a family-friendly event (just count all the strollers on the course), and has retained its community feel and sense of playfulness over the years. Unbeknownst to many runners, the race committee sets up secret challenges for participants, like when one sponsor agreed to make an extra donation for every person who beat the time of John Kennedy, a race committee member who was the first to don a turkey hat to set himself apart.

And the turkey hat? It’s practically part of the dress code now. While the run provides long-sleeved shirts to all registered participants, it’s the turkey hats (and pilgrim outfits) that are the most iconic. Hanna estimates that one out of every 75 to 100 participants wears a turkey hat, which is no small number given that more than 27,000 runners and saunterers hit the pavement of J Street last year.

It’s easy to see why the race has reached iconic status. “It’s the perfect day, the perfect course and the perfect cause,” says Hanna. “People show up because they feel good about the cause. And about preemptively burning those calories.”

Tips for a Great Race Day 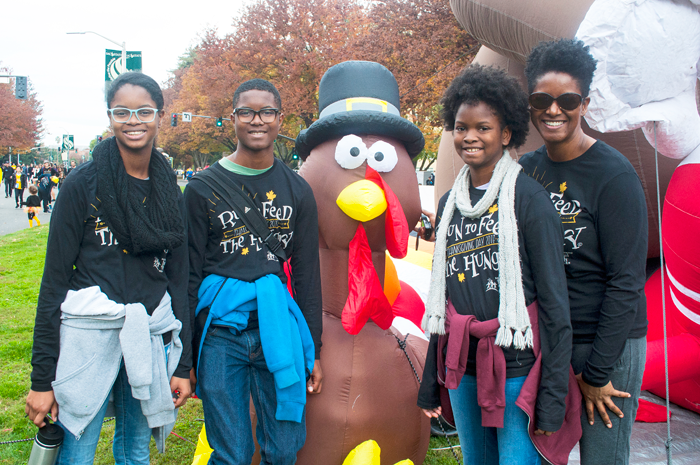 Coldest race-day temperature: 30.9 degrees at race time in 2015
Oldest participant: Eugenie Mendis, who at age 93 clocked a time of 1:47:26 in the 5k in 2018
Greatest number of portable toilets: 240 in 2018
Best time, male: Alene Reta ran a 28:37 10k in 2007
Best time, female: Kimberley Fitchen-Young ran a 33:15 10k in 2004
Biggest prize money: $2,000 for first place in the 10k
Best celebrity impersonation: Elvis on Elvas, now in his third incarnation, has performed live on the sidelines every year since 2004
Best couple’s costume: The turkey and butcher
Number of participants in the first year: 796
Largest number of participants: 29,613 in 2017
Most money raised: $900,000 for Sacramento Food Bank in 2019
Worst race-day conditions: The 2019 race saw a lower-than-expected turnout due to bad air conditions from nearby wildfires
Best sideline snacking for participants: Bloody marys, turkey legs, stuffing and yams have all been tucked in among the disposable cups of water and Gatorade
Silliest headgear: Corn cobs, slices of pie and a Thanksgiving dinner table with fake food spreads
Best adaptation of new technology: Run to Feed the Hungry was the first local race to adopt digital timekeeping. 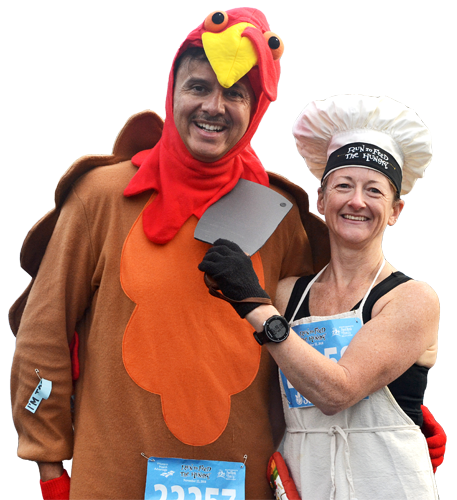 Participants receive a long-sleeved T-shirt to commemorate that year’s race. Teams receive a gender-specific shirt with their personalized team name on the back, a group photo and breakfast. Individuals who donate $50 or more at registration receive a Run To Feed the Hungry turkey hat and pin.

Prizes:
The top three overall male and female finishers in the 5k and 10k receive custom plaques and the following prize money:
$300 for first place
$200 for second place
$100 for third place

Best weird hat or costume?
I have not dressed up other than to run as fast as I can, but as far as what others are wearing, it is true that there is a very colorful and interesting variety of hats and costumes there at the Run to Feed the Hungry.

Best year and why?
2000 because the event had experienced such tremendous growth over the previous years. It seemed like there was far more preparation put into the event. It really paid off. The numbers were huge, and this set the stage for even more growth in future years, eventually overtaking the Susan G. Komen Breast Cancer Foundation’s Race for the Cure as Sacramento’s largest race in later years.

What’s your race-day ritual?
Start warming up 40 minutes before the gun goes off to leave enough time for the bathrooms, remove the warmups, then a few strides and drills before the start.

What’s the most unexpected thing you’ve seen on the course?
I think it was 2002 when the Raiders were having a great year, eventually making it to the Super Bowl in 2003. Coming back up to H Street, there was a huge group of Raiders fans all dressed up in their Back Hole garb, cheering on the runners and wishing us happy Thanksgiving.

Best post-race snack (other than Thanksgiving dinner, of course)? Krispy Kreme or granola bar?
Krispy Kreme (but I also like to wash it down with a protein drink).

Most surprisingly emotional moment?
Probably in 2007 when I crossed the finish line with a pretty solid time (for me) and with no pain in my hip. The Run To Feed the Hungry in 2007 was the result of about six months of slow, consistent rehabilitation and training after having a hip-resurfacing surgery earlier that year to treat a hip impingency that left me unable to run for a year before.

Most Sacramento thing you’ve seen on race day?
Who can argue with the dense trees lining J Street on that first mile? Sacramento is known for its concentration of trees. But in the fall with the amazing colors, and on Thanksgiving Day when not quite all of the leaves have fallen, it is unforgettable. Although the huge CSUS sign near the staging area is hard to argue with as well.

The race moment I’d like to forget is when _________.
I was driving home after the race last year and realized I never picked up my T-shirt! I hate it when that happens! I was sidetracked chatting after I got my bib number and got distracted and walked right by the T-shirt table, not paying attention!

I can’t run Run To Feed the Hungry without _________.
A good-luck kiss from my wife. She is the real runner in our house. But she is very supportive (often more than I deserve) of all my running and racing escapades characteristic of a 55-year-old middle-of-the-packer who likes to think he is faster than he really is.

The reason I keep coming back
Because of how valuable the hard work of the people at the Sacramento Food Bank & Family Services really is. I have a great Thanksgiving Day race only a few miles from my house in Folsom, supporting a similar cause. But I’ll get up earlier, travel the extra 20 miles and make my way through the much bigger crowds. No one should go without food. Not on Thanksgiving. Not on any day. So many folks at the Sacramento Food Bank & Family Services work hard behind the scenes with little or no reward or acknowledgement to help with this problem. It is their hard work and success which is the reason why I choose the Run To Feed the Hungry.

Where’s the fun in getting up at 6 a.m. to freeze your butt off on Thanksgiving morning?
Who would miss the event of the year? Almost 30,000 of your friends and neighbors all in one place! Besides, sleep is overrated.

Best weird hat or costume?
The costume theme is relatively new, perhaps from the last five years. The best costume is the turkey. After all, there are a fair number of us turkeys in the crowd anyway.

Best year and why?
Best year? They were all wonderful. My vote is this year!

What’s your race-day ritual?
My ritual is: “Don’t worry, be happy.” You can’t lose. It is going to be a wonderful start to a wonderful day.

Best post-race snack (other than Thanksgiving dinner, of course)? Krispy Kreme or granola bar?
Post-race, it is best to concentrate on fluids. Beverage of choice!

Most surprisingly emotional moment?
Watching the reunions happening all around.

Most Sacramento thing you’ve seen on race day?
It’s a representative community of 30,000 coming together with the same excitement and joy. (Plus a million watching on TV).

What’s your Run To Feed the Hungry PR?
Seeing 200-plus friends that I had not seen all year.

The race moment I’d like to forget is when _________.
I agreed to be interviewed on TV. I freeze in front of cameras.

The reason I keep coming back
The RTFTH event becomes part of your family.

Best weird hat or costume?
There are always great costumes and hats with a turkey theme. I’m not one of them.

Best year and why?
The best year is any year I win my division.

What’s your race-day ritual?
I sleep in as late as possible, drink approximate 8 ounces of water, double-check the weather forecast, hopefully a bathroom stop at the house before I leave, extra clothing, having race number and pins, etc., and get to the race approximately 45 minutes before race time to warm up.

Best post-race snack (other than Thanksgiving dinner, of course)? Krispy Kreme or granola bar?
Right after the race, I keep things simple and bland. Later, a beer, of course. Then later-later, pumpkin pie and vanilla ice cream.

Most surprisingly emotional moment?
It’s always when I see former runners or students I haven’t seen for many years or decades.

Most Sacramento thing you’ve seen on race day?
Houses in East Sacramento decked out in Thanksgiving decorations as I run the race. I do take a peek during the race.