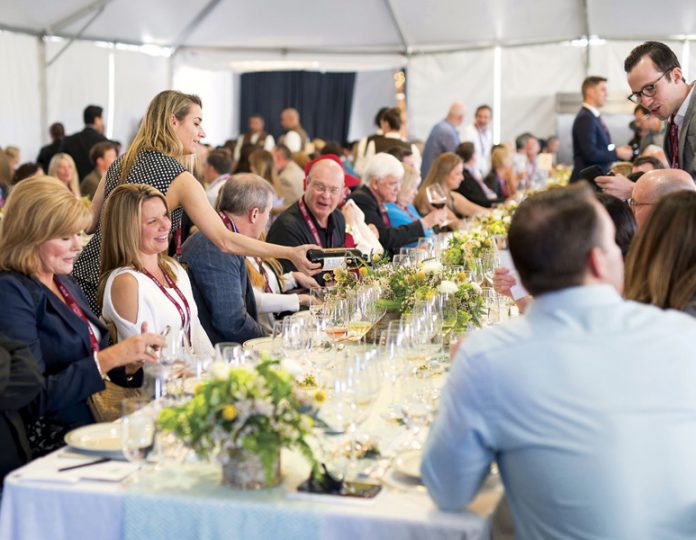 As springtime breezes in on the Central Coast, the foodie world blossoms with festivals that bring in some of the world’s leading culinary thinkers, from winemakers and brew masters to chefs and purveyors. They converge on the coast, where fertile land joins swirling sea, under skies usually sunny, in locations that are, put simply, stunning.

As is the food. Now in its fourth year, in mid-March, Relais & Chateaux GourmetFest arrives in Carmel-by-the-Sea, with events that fill gathering spaces at La Playa Carmel and L’Auberge hotels, as well as at various points around the region. (For example, a guided wild mushroom hunt takes guests tromping through the 20,000-acre Santa Lucia Preserve deep in the Carmel Valley, and then everyone has lunch.) Then, the third weekend in April, the prestigious Pebble Beach Food & Wine festival celebrates its 10th anniversary this year—some 250 vintners and 100 chefs come together for pairings, demos and multicourse dining experiences, all held on-site at Pebble Beach Resort.

Both events are high luxury, from the accommodations to the haute cuisine and premium (and often rare) wines, right on down to the closing-night gift bags. (Attendees at GourmetFest last year staggered away with a ton-weight bag of goodies that included cookbooks, sets of S. Pellegrino glassware, an adorable Le Creuset refrigerator magnet that looked exactly like a stew pot for Barbie and Ken, and lots of Valrhona chocolate. Of course, what’s in the bags each year depends on the sponsors, but suffice it to say, there’s no scrimping at these food fests.) You’ll taste dishes you’ve never heard of and wines you’ve only dreamed of—collectors and connoisseurs are out in force, but there’s room for the layperson as well. This year’s Relais & Chateaux GourmetFest, held Thursday– Sunday, March 16–19, opens with a welcome party at La Playa Carmel (a lovely inn with gardens that tumble downhill oceanward) and ends with a midday food and wine Taste of the World gathering at Folktale Winery, 5 miles inland along the Carmel River. In between, the schedule is packed, with vintner-led tastings (such as the one from Dominique Lafon of Domaine des Comtes Lafon) and chef-packed and wine-paired lunches and dinners that include the $1,495-a-person Rarities of the Sea champagne brunch and the $5,500 Rarities Dinner held at Aubergine restaurant in L’Auberge; each meal seats only 28. The festival can accommodate up to 500 people, though, with numerous tastings and pairings spread throughout the four days, with several overlapping so you must choose, for example, whether to do the mushroom hunt or the cooking demo and lunch with Daniel Boulud (of New York’s Michelin two-starred Daniel) and Nathan Rich (of Twin Farms, an all-inclusive farmstay property in Vermont). Event founder (and L’Auberge owner) David Fink presides over the festivities, clearly smitten with the talent he has beckoned from all around the world.

Starting with an evening opening ceremony on Thursday, April 20, and running through Sunday, April 23, Pebble Beach Food & Wine festival takes over the Pebble Beach compound with 100 renowned chefs, 15 dining events, 22 wine and spirit seminars, eight cooking demos, two grand tastings (in the fancy Lexus tents) and some 8,000 attendees. Founded by David Bernahl of Coastal Luxury Management (also responsible for the Los Angeles Food & Wine festival and Monterey’s fabulous Restaurant 1833), Pebble Beach Food & Wine lures talent from around the world. It was a feather-in-our-cap statement when some of our favorite Sacramento chefs were invited in the past, including Michael Thiemann (Mother, Empress Tavern), Matt Masera (Hook & Ladder), Kelly McCown (The Kitchen), Oliver Ridgeway (Grange), Ramon Perez (Puur Chocolat) and Billy Ngo (Kru)—and we’ve yet to see what this year’s Pebble Beach lineup brings. The festival invites the legendary, the rising stars, James Beard- and Michelin-award winners, and those with other stellar culinary designations, and has hosted Thomas Keller, Cat Cora, Fabio Viviani, Jacques Pépin, Guy Fieri, Charlie Trotter and Wolfgang Puck, just to name a handful. This is a crowd of heavy hitters and the lineup promises to shine in this 10th anniversary year.

So pick your weekend, buy your tickets and make your plans. And while you’re there, here are a few other ways to enjoy the beautiful region in the spring. 17-MILE DRIVE—If you’re at Pebble Beach, you’re already here and you’re probably going slow, thanks to all the other visitors in the area for the festival. Relax. Stop often. Get out of the car, stretch your legs and throw your arms open to the springtime sea mist. Blazing blue in the sunshine, the ocean roils and charges in and crashes against the rocks—just give up on your windshield while you’re in this neck of the woods. Highlights along the way: The Restless Sea (some of the roughest surf along the Pacific Coast), Bird Rock (look for sunbathing sea lions), Cypress Point (perfect for sunsets and marriage proposals), The Lone Cypress (just what it sounds like) and The Ghost Tree (watch for surfers).

MONTEREY BAY AQUARIUM—It’s not just for kids, although you’ll dodge plenty of them while you’re there. Even if you’ve been before, exhibits change often, and right now, several enticing ones are running: Tentacles, which includes squid, cuttlefish and the giant Pacific octopus with its intimidating arms (legs?) covered with suction cups; and ¡Viva Baja!, a vibrant collection of animals from the coral reef communities to our south. It won’t be too tough to spot the Cortez rainbow wrasse, a fish with bubble-gum coloring, or the baby golden trevally, little fishes the color of a yellow highlighter.

PLAY GOLF—It’s a popular pastime at the Pebble Beach Food & Wine festival, catching a round before the tastings and seminars get underway. Tee times fill up fast, though, even at $525 a round. Rest your pocketbook and book the local muni, Pacific Grove Golf Links, which is renowned for its bargain prices ($69 a player) and spectacular views (the back nine runs adjacent to 17-Mile Drive), and has been referred to as “poor man’s Pebble Beach.”

BEACHCOMB WITH THE DOGS—Carmel Beach, at the bottom of Ocean Avenue in Carmel-by-the-Sea, invites dogs to frolic leash-free. It’s a delightful spectacle, the four-legged friends gallivanting along the water’s edge, chasing balls and sticks and weird rope toys—and each other. Little dogs with bellies full of sand, big ones dancing in place while someone winds up their arm to hurl the ball—the joy is contagious. With dog or without, you’ll get in a solid, calorie-burning stroll on the hard sand by the water, and you’ll feel it when you huff back up the hill to your car or the Carmel shopping district.

FISH AND CHIPS—This is for after the food festival, when you’re hanging around an extra day or two and craving something more pedestrian. Several spots in the general area serve up some mean fish and chips, and it may just be the kind of comfort food that hits the spot after four days of haute cuisine. Crispy on the outside, moist white fish—with no icky brown stuff—on the inside. Hit Sea Harvest in Monterey, A.W. Shucks in Carmel (down an oyster, too) or Phil’s Fish Market in Moss Landing. Malt vinegar is on the table.

A NEW HOTEL—Located on a quiet side street within walking distance of Ocean Avenue, Hotel Carmel opened in spring 2016 with 27 cushy guest rooms. Our favorites front the courtyard, where a fireplace warms a seating suite and a blazing fire pit centers a collection of Adirondack chairs—both spots perfect for conversation, some local wines and a collection of snacks (perhaps from The Cheese Shop in nearby Carmel Plaza). The communal jetted hot tub is tucked into the corner. The hotel’s cozy lobby serves as the breakfast nook, where you’ll find house-made granola, bagels, all kinds of cream cheese (including one with bacon) and jams, and lots of coffee.