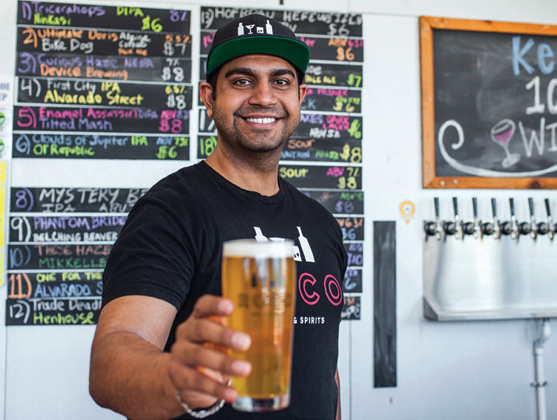 Back in the summer of 2016, when Rohit Nayyar first announced plans to expand his West Sacramento bottle shop RoCo Wine & Spirits by adding an adjacent taproom, he expected to start pouring beers within a couple of months. Fast-forward 379 days filled with soul-crushing construction, permitting and inspection, and the usually jovial Nayyar winces at the memory.

“It has definitely been the most challenging and most frustrating part,” says Nayyar, taking sips from a glass of Temescal Local Passion IPA in his now-open taproom. “I did not have gray hair until December of last year, and in the last four months my whole head lit up like a Christmas tree.”

The simple layout of the taproom—a few narrow tables, a small bar, picnic tables on the patio and a chalkboard listing the 30 beers on tap that day—belies its complicated birth. But to Nayyar, it looks like paradise, and the early returns have been enthusiastic. Customers emptied two 15-gallon kegs on opening night in June and have continued killing an average of two kegs a night ever since.

By offering free samples and affordable tasters, Nayyar draws in the Coors Light and Corona crowd while also satisfying hard-core connoisseurs cruising for the latest Alvarado Street haze bomb. “You have very nerdy customers, and then you have customers that we’re trying to educate and convert over to craft beer,” says Nayyar. “We’re trying to reach all of them, and that’s where we got this idea.”

In addition to the bottle shop and taproom, Nayyar grows hops in Yuba City, mostly West Coast staples like Centennial, Cascade and Chinook. Local breweries such as Knee Deep, Rubicon and New Glory use Nayyar’s hops in their beers, but Nayyar doesn’t plan to follow fellow taproom and bottle shop owner Rob Archie of Pangaea into the brewery game.

Nayyar is content to pour beers and interact with his customers. “Go out there and try something new, then come tell me all about it,” advises Nayyar.