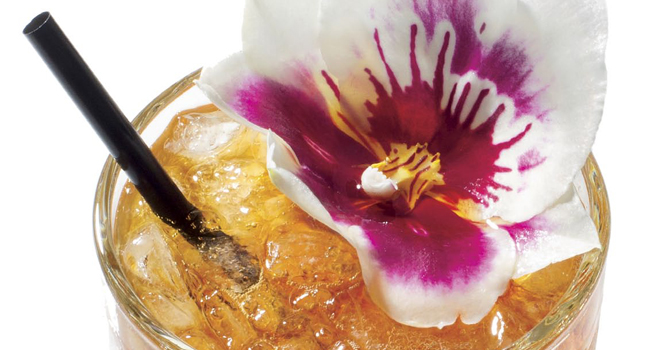 As Sacramento summer heats up, a drinker’s thoughts naturally turn to tiki drinks. Inspired by the Polynesian tropics, tiki drinks were actually invented 80 years ago in California, first by L.A. restaurateur Donn Beach and later by Northern California’s Victor Bergeron, owner of Trader Vic’s. These showy rum-based cocktails, with their fun names and extravagant presentations, were designed to transport the drinker to a far-away place. “It’s a 15-minute vacation,” says bartender Baron Stelling. “You’re in paradise.”

WHAT MAKES IT TIKI

Tiki drinks are “all about the show,” says Peters. They’re often served in outlandish ceramic tiki mugs made to look like a shrunken head or a rum barrel. Garnishes can include fruit, little paper umbrellas, edible flowers, and plastic spears, monkeys or picks. At Hock Farm, they sometimes serve a flaming garnish: a crouton dipped in Bacardi 151, placed in a hollowed-out lime shell and set on fire.

Despite the fruity flavors and fanciful garnishes, tiki drinks are not for wimps. “The original tiki recipes were very alcoholic,” says Stelling.

Mai Tai: The original tiki drink, made with rum and lime juice.

Zombie: Donn Beach reportedly whipped up this potent cocktail to help a hungover customer get through a business meeting.

Hurricane: Invented at Pat O’Brien’s bar in New Orleans during World War II when whiskey was in low supply, forcing bar owners to use rum instead.

Scorpion Bowl: Served in a large bowl and made with gin and vodka as well as rum.

Suffering Bastard: Concocted in Cairo as a hangover cure, it’s made with bourbon and gin instead of rum.

Fog Cutter: Supposedly created by Trader Vic, who said, “Fog cutter, hell. After two of these, you won’t see the stuff.”