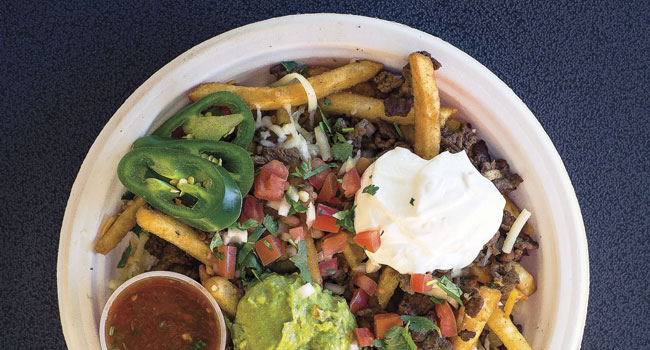 According to food historians, tacos have been eaten in the United States for about a century, but Daniel Flores says that Sacramento’s love affair with the taco began in the early 1970s when what is thought to be the city’s first taqueria opened at 12th and F streets. Taqueria Jalisco, operated by Flores since 1990, now stands at 16th and D streets in downtown Sacramento and remains a culinary treasure. Stop by during the lunch hour and you’re bound to see a legion of loyal customers lined up for Flores’ street tacos, chile verde burritos and carne asada fries. “Our clientele is special,” says Flores. “They love us, and we wouldn’t be here without them.” He also credits tireless employees for being able to keep up with the fast-paced demand. “When it comes to crews, there is no other,” he says. As for the food, Flores confesses to having a secret ingredient: “It’s love. We are very passionate, and it shows up in our food.” Love, yes, and the roasted garlic he uses to flavor just about everything, including the corn tortillas. Despite the din of nearby traffic, the tidy outdoor patio has its charms, especially if you’re washing down your meal with a Track 7 beer from the tap. 330 16th St.; (916) 446-4834; eatataco.net

From a humble taco stand along Arden Way to a shiny new outlet in Roseville, Chando’s Tacos is poised to take over the world (or the suburbs, at least). Chando’s third location (down the road from the Roseville Galleria) opened in February, while its popular food trucks make frequent appearances at festivals and private parties. Fans adore the carne asada and adobada. Avoiding carbs? They’ll wrap your tacos in butter lettuce if you ask nicely. 863 Arden Way; (916) 641-8226; 5665 Power Inn Road; (916) 387-8226; 943 Pleasant Grove Blvd. Roseville; (916) 782-8226; chandostacos.com

Some of the best tacos in town come out of a strip mall in North Natomas. Asada, carnitas, lengua (tongue), longaniza (sausage)—Taqueria Rincon Alteño does practically every type of taco, and it does them well, judging by the teeming dining room. Also popular here: wet burritos smothered in red or green sauce. If you’re famished, the three-and-a-half-pound gigante burrito should satisfy you till, oh, next month or so. 4301 Truxel Road; (916) 515-4815; taqueriarinconalteno.com