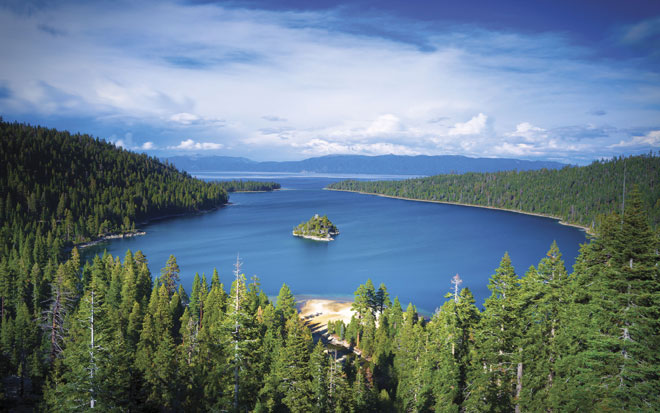 Peak season at Lake Tahoe, Northern California’s favorite summer playground, is in full roar, and it’s no matter that lake levels are low and many docks are perched high and dry above the water. The upside is double-wide beaches and see-to-forever clarity due to reduced runoff. Besides, you don’t even have to play, paddle or swim in Big Blue for the lake to work its magic. Just looking out on that glistening sheet of H2O has a way of calming the senses and soothing the soul.

That’s especially true during a drought year that has seen many California lakes and streams shrivel to embryonic proportions. “We have more water than anybody in the state right now and are anticipating a better-than-normal tourist season as people’s regular swimming holes dry up,” notes Tom Lotshaw, spokesman for the Tahoe Regional Planning Agency, which keeps close tabs on the Tahoe environment.

Since mid-June, water levels at Tahoe have been riding about 3 feet below the lake’s natural rim at 6,223 feet, according U.S. Geological Survey data. It’s hardly a cause for panic. “This is not the lowest it’s ever been by any stretch,” says Lotshaw, adding that historically water levels have dipped below the rim about twice a decade at least since the 1950s.

While the drought has forced closure of some boat launch ramps and marina operators have had to dredge to stay afloat, Tahoe, at 22 miles long, 12 miles wide and more than a quarter-mile deep, is still “a huge body of water,” notes Andy Chapman, a longtime North Shore tourism executive. “We don’t want to minimize the drought by any means, but it’s had less impact on us than other recreational locations. What you get when you go to Folsom or Berryessa or Shasta is a big bathtub-ring effect. We don’t get that at Tahoe; we just get wider beaches and more rocks.”

And more kayaks and stand up paddleboards, too. As long as air quality stays good, Andrew Laughlin of Tahoe City Kayak and other operators around the lake say they expect their best year ever.

With the economy humming, it’s also a good year for new businesses and activities round the lake. Among openings since last summer are Alibi Ale Works in Incline Village, Moe’s Original BBQ in Tahoe City, 1882 Bar and Grill at The River Street Inn in Truckee, Pizza Bar in downtown Truckee and Azul Latin Kitchen in Heavenly Village. Meanwhile, Rustic Lounge at Cedar Glen Lodge in Tahoe Vista is creating fine-dining buzz, and Stella, the always-innovative restaurant at Cedar House Sport Hotel in Truckee, is offering underground dinner parties to the public. Music is everywhere in the air this summer, from big names like Elton John at Harvey’s Outdoor Arena to weekly concerts at Lakeview Commons in South Lake Tahoe and Commons Beach in Tahoe City.

One amazing fact to always remember about Lake Tahoe: Summer days are often 25 degrees cooler than in Sacramento. Water or no water, that in itself is a great incentive to make a trip up the hill.

How Suite It Is

What’s the best room with a view at Lake Tahoe? For sheer aah factor, we give top billing to the Mount Watson and Marlette Peak suites at West Shore Cafe & Inn in Homewood. Each boasts an elegantly furnished sitting room and separate bedroom, plus two baths, two fireplaces and two balconies hanging over the sand. If you’re looking to impress your sweetie, this is the place. 5160 West Lake Blvd., Homewood; (530) 525- 5200; westshorecafe.com

Let’s say you want to try camping but don’t have the full suite of equipment— tent, sleeping bags, pads, camp stove, etc.—required to introduce your kids to a weekend in the woods. Enter Tahoe Wilderness Adventures’ camping concierge service. You secure the campsite reservation and they’ll arrive before you do to set up the whole shebang, right down to tablecloth, lantern and ice-filled cooler. They’ll take it all away when you leave, too, making the whole experience hassle-free. Three-year-old TWA also offers guided hikes and backpacking trips for groups and families, as well as gear rentals. “We’re here to make your experience as joyful as possible,” says founder Kyle O’Neal. (530) 308-4422; tahoewildernessadventures.com

For decades, the cramped Emigrant Trail Museum at Donner Memorial State Park told the story of the ill-fated pioneer party that lost some 48 members to starvation during the deep-snow winter of 1846–1847. Now that facility is history, replaced by a new visitor center and museum interpreting the stories of many who passed through, from the indigenous Washoe to the early tourists who chugged over the Lincoln Highway in their Model A Fords. Admission to the 3,000-acre park on Donner Lake, just off Interstate 80, is $8 per vehicle, with no extra charge for the museum. 12593 Donner Pass Road, Truckee; (530) 582-7892

Retreat to the Spa

At Stillwater Spa, downstairs at Hyatt Incline Village, indulge in a Lake Tahoe hot stone massage, grab a quick pedicure or book a one-on-one yoga therapy session with a yogi who finds a peaceful spot on the property, perhaps beside a bubbling stream, and guides you through moves designed to soothe, stretch and energize. Afterward, wander down to the floating Pier 111 Bar to sip a cocktail at sunset. 111 Country Club Drive, Incline Village; (775) 886-6745; laketahoehyatt.com

With many boat ramps closed and piers sitting high and dry due to low water levels, there aren’t as many powerboats zipping around the lake as most years. That means fewer wakes to watch out for if you’re paddling a kayak or SUP (stand up paddleboard), either of which can be rented from more than a dozen locations around the lake. Take a lesson, sign on for a guided tour or paddle off on your own to sweet little sugar-sand beaches inaccessible by car. Prime launching spots include Sand Harbor, with its turquoise water and stunning rock formations, and Emerald Bay, home to the historic Vikingsholm estate. Tahoe City Kayak rents boats with cockpits big enough for your dog to come, too.

For more Tahoe coverage, pick up a copy of the August issue, on newsstands now.