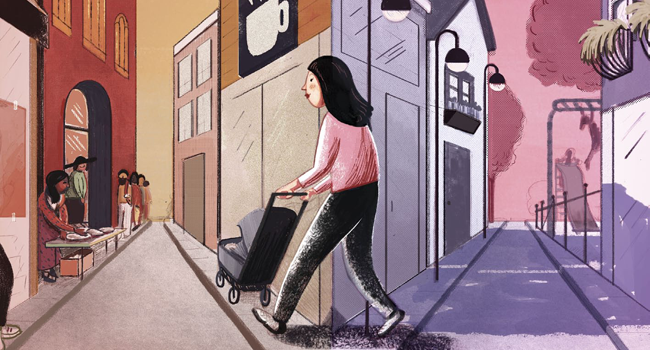 One of the things I love about Sacramento—the city I grew up in and eventually moved back to after a decade in Southern California—is that there is no good side or bad side of town. Also, Wired magazine published an article in 2013 that specifically called out Sacramento as being one of the most racially integrated cities in the nation, a claim that data crawler website Priceonomics backed up in 2015.

The diversity and integration of the city seem to serve as tangible, visible reminders that anything’s possible. Don’t like the vibe of your particular neighborhood? Go three blocks in any direction and there’s a good chance you’ll find yourself in a totally different subculture. Want more art? More tech? More kids? Fewer kids? More gentrified? Less gentrified? Better restaurants? Better schools? In Sacramento, whatever you’re after, you’re always just a few blocks away.

If I really think about it, being a kid in Sacramento’s public school system birthed my desire to adopt a child. I had a mom and a dad who were married to each other and loved me and happily provided for all my basic needs. Many of my classmates did not. Even in elementary school, it seemed like simple math to me: My family had plenty of love to go around, added to the fact that there were a lot of kids out there who needed loving families, equaled an idea that I could adopt a child one day.

A couple of decades, nine years of marriage and one biological baby later, my husband and I were ready. We went through the lengthy and challenging process of becoming certified to adopt through the Sacramento County foster system, and on a totally ordinary October day in 2012, a miracle occurred. My husband called me to tell me that our social worker had called him, and there was a baby boy in the NICU who needed parents. My heart was outside my body. Two weeks later, we brought him home, and six months after that, we legally adopted him. My heart still hasn’t recovered.

The first few months with Noah were indeed miraculous, but they were also hard—very, very hard. I had an 18-month-old son who was in constant motion, always seeking out the most dangerous activity he could conjure. Because Noah was born prematurely, we were told that we should not take him to public places for three months, giving his immune system some time to catch up. I was essentially on house arrest with a suicidal toddler and a newborn I hadn’t been expecting. It’s safe to say that I wasn’t at my best during a lot of those early days.

So we walked. We went for almost-daily walks to get outside the house while Noah stayed in the stroller under a receiving-blanket shroud. We lived in a neighborhood that was just a few blocks away from one of the best neighborhoods in Sacramento, and in the other direction, just a few blocks away from one of the worst. I grew up here, so it all felt normal to me. On our walks, some days we went left, some days, right. My favorite coffee shop was in the sketchier neighborhood—part of the grass-roots gentrification effort—but there were usually more kids to play with in the fancy park. I liked to have options, and I felt like we fit in no matter which direction we chose.

On one of the days that I chose the coffee shop, I noticed a gathering in the parking lot of the church two blocks away from my house. It’s an almost exclusively black congregation, and I was always struck by the disparity between what Sundays looked like compared to the rest of the week. I’m pretty sure this congregation invented the term “Sunday best.” Little old ladies in tweed skirt suits and pillbox hats. Huge men in three-piece suits with fedoras. Boys in shiny penny loafers and girls with the tightest braids you’ve ever seen. I loved watching the families come and go, calling out their loud, cheerful greetings to each other across the street. On Sundays, we all agreed to pretend this was not, in fact, one of the worst neighborhoods in town. It was just church.

On Tuesdays, though, a few church members always gathered to set out tables of groceries to give away to anyone who showed up. It was a quiet, subdued event. On Tuesdays, we knew what neighborhood we lived in. I had witnessed it from afar many times: the volunteers getting set up, the needy lining up and waiting patiently until everyone was ready. Week after week, they showed up, both the volunteers and the people they were there to serve. I never saw the event advertised, whether on a local resource list or on any sort of flashy banner in front of the church. It seemed to be as simple as a church community seeing a need in its neighborhood and showing up, week after week, to meet that need. It warmed my heart, and I was grateful to be a spectator of something good happening in the world right here in my neighborhood.

On this particular Tuesday, as I pushed my $600 double stroller toward a $4 latte, one of the church volunteers called out to me.

“Hey, Mama, you need something to eat?”

I yelled back that I was “all good,” but she persisted.

Grabbing her friend by the arm and coming out to the sidewalk where I had barely broken my stride, she assured me, “Everybody needs to eat! We got food for them babies if you won’t take it.”

I explained that I loved what they were doing, and that since my family was fortunate enough to be able to buy all the food we needed, I wanted to leave the food there for someone who really needed it.

“All right, all right,” she conceded, “but at least let us pray for you. Everybody could use some prayer, amen?”

“Amen!” I responded, because what the hell else was I going to say, really?

“Well, you can pray for Noah,” I said, opening the sunshade of the stroller so they could see his tiny little face. “He’s our foster child right now, but we’re hoping to adopt him. He was born prematurely and surrendered at the hospital, and, well, he could just use a lot of prayer.”

“Oh,” she said, at about one quarter of the volume and enthusiasm with which she had said everything else. She looked at Noah. She looked away. “I got kids in the system.”

She was referring to the foster system. She had kids of her own who had been taken away from her and were being raised by strangers like me. That’s what she was telling me. She was on the other side of the equation.

My heart, which was still outside my body then, was seared by the pain of her words. If I learned one thing through that long and grueling foster parent certification course, it’s that there’s no use for judgment here. There is an enormous need for compassion.

“That must be so hard,” I told her, having hardly ever meant anything as much as I meant that.

It was, she told me. But she went on to say that she was grateful for people like me who had love to give, and she hoped her kids’ foster mom was as nice as I was. I awkwardly tried to accept her compliment, but mostly I was just so heartbroken for her that I was trying not to cry. I thought of Noah’s biological mother, wherever she was, and felt heartbroken for her, too.

And then, right there on the sidewalk in the middle of a neighborhood known for its crime rate, on an unremarkable Tuesday morning, we put our arms around each other and bowed our heads and she prayed for me. She prayed that I’d have wisdom to be a good mother. She prayed for Noah, that he would be healthy and loved. She thanked God for the sunshine that day.

We were all different parts of the system, and had a million reasons to be skeptical of each other that day, but in that moment, we were mothers, and we were neighbors. I was humbled and grateful to accept what she offered us that day.

There is no use for judgment here.