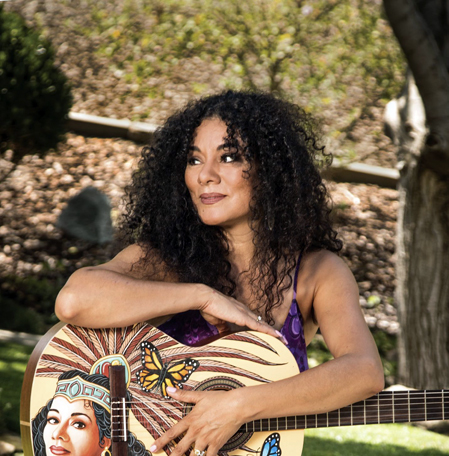 Because she’s often seen brandishing an acoustic guitar and pouring her heart out singing traditional Mexican songs like “Besame Mucho,” it would be easy to categorize Dinorah Klingler (who goes simply by Dinorah) as a Latina performer.

But Dinorah—who also sings in English, French and Italian— prefers the term “world musician” and has been honored as such: Of her three SAMMIES awards, two (in 2016 and 2017) were for world music artist of the year.

“Music is a powerful tool to communicate and keep people united,” says Dinorah, who grew up in Mexico City and now calls Sacramento home. On Aug. 12, she’s doing her part to keep people musically united by co-producing the Mariachi Festival de Sacramento, where she’ll perform—of course—with a mariachi band.

Music is a lifelong occupation for Dinorah, who started singing in church at age 3 and basically never stopped. When she was a teen, she and her sister would sneak out and perform in the subway, “raising tip money to buy things for the family,” she says. “We just wanted to play music.”

These days, you’ll find Dinorah either performing solo (at places like Mesa Mercado restaurant in Carmichael) or with one of her two bands, Las Brujas or Crosswinds, her salsa and blues band. Whatever she’s doing, she says, one thing remains constant. “I put all my emotions in my songs,” she says. “I am a passionate musician.”