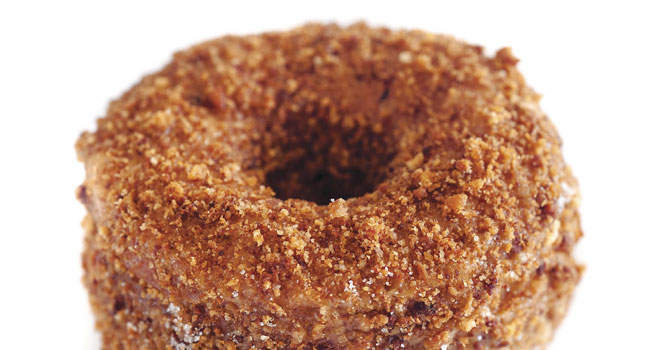 Siblings Nuny Cabanting and Jeremy Khamphay are the creative forces behind Sweet Dozen, an artisanal doughnut shop in Carmichael. They recently began selling their delicious wares on Saturday mornings at the Midtown Farmers Market.

As children, Cabanting and Khamphay moved with their parents to the United States from Thailand. Their mom and dad operated shops in Chicago and the Bay Area before moving to Sacramento, so the siblings literally grew up in the doughnut business.

Opening Sweet Dozen in 2008, the family had to be innovative to survive the Great Recession. So in 2011, they introduced Sacramento to the doissant (a cross between a doughnut and a croissant), followed by the wonut (a deep-fried waffle doughnut). These days, they serve “melts”: doughnut ice cream sandwiches that go into a contraption similar to a panini press, so they’re hot on the outside, cold on the inside. “We’re always trying to come up with new things to keep people interested,” says Cabanting.

Inspired by the success of shops like Portland’s Voodoo Doughnut, they branched out into artisanal doughnuts with high-concept flavors like carrot cake, pistachio, lemon poppy seed and blueberry. Soon, they were making appearances at hipster events like Gather in Oak Park and GOOD street food + design market on Del Paso Boulevard.

They knew they had a success on their hands when they sold out in two hours their first time at the Midtown Farmers Market. Now they’re planning a mobile business called Sweet Dozen on Wheels, so they can sell their doughnuts at food truck gatherings and other events. “We want a presence in midtown,” says Cabanting.