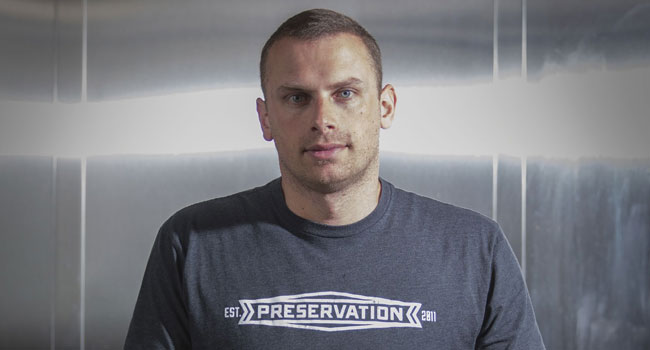 Jason Poole is a pickle guy. “Salt has always been my good friend,” says Poole, the self-described “brine boss” at midtown’s Preservation & co., maker of handcrafted pickles and other shelf-stable food products, including mustard, flavored salts and Bloody Mary mix.

Poole was working as general manager at a local bar when he started the business in 2011. It got a big boost a year later when Poole placed second in Absolut Vodka’s national Bloody Mary competition with a recipe featuring Sriracha sauce, capers, Dijon mustard, balsamic vinegar reduction and pickling brine. He began bottling and selling his prizewinning mix and eventually left his job to open a production kitchen and retail space in a former automotive shop on 19th Street. (The entrance is a roll-up garage door.) To bankroll the project, he held two Kickstarter campaigns and got a financial assist from his dad. Even so, his wife had to take a job to support them both. “I play Russian roulette with my bank account every week,” Poole says.

His product line includes balsamic beets, black pepper asparagus, hefeweizen bread-and-butter pickle chips and hickory Brussels sprouts, plus three flavored salts: Sriracha, ghost pepper and citrus rosemary. (“Great as a rim on a margarita,” Poole says.) He also creates special releases such as whole-grain porter mustard, a Beer Week collaboration with Sacramento’s New Glory Craft Brewery. Every product is made by hand in small production runs, and an employee batch-numbers each jar using a black Sharpie. No matter how big the company grows, Poole promises to retain that personal touch. “There will always be a batch number so people know exactly when the product was made,” says Poole, who expects to produce 200,000 jars this year. (National retailer Home Goods recently started carrying his products.)