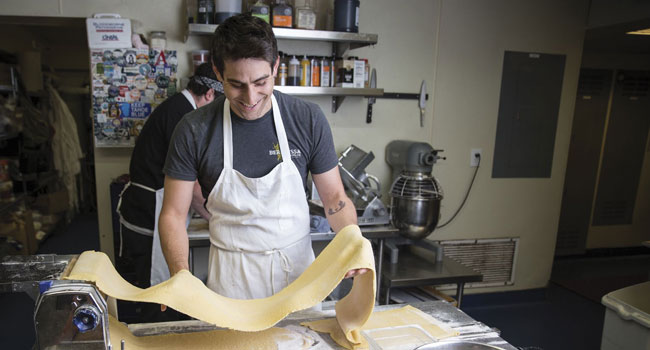 As the pasta maker at midtown’s Hook & Ladder Manufacturing Co., Vinny Lazzaretto is responsible for one of the restaurant’s most popular dishes: roasted beet linguine. Having made his bones with that pasta, Lazzaretto is preparing to launch his own small company, selling hand-cut noodles at local farmers markets under the name Lazzaretto Pasta Co.

Lazzaretto learned the art of spaghetti making as an 18-year-old apprentice to Angelo Auriana, the acclaimed chef at Masque Ristorante in El Dorado Hills. “He taught me everything I know about pasta,” says Lazzaretto, now 29, who went on to make pasta at Mulvaney’s B&L and The Golden Bear. At Hook & Ladder, he’s known for the beauty and texture of his hand-cut and hand-cranked pastas. His recipe is simple: high-gluten flour, salt, lots of eggs and—surprise—white wine instead of water. He uses chilies, arugula and beets to subtly color his noodles in pastel shades of pink, green and purple. “I love to make pasta pretty,” he says.

Lazzaretto makes string pastas such as linguine, pappardelle, tagliatelle and spaghetti alla chitarra, along with cavatelli (small, elongated pasta shells). He’ll sell his products at local farmers markets but eventually hopes to have a small retail operation, similar to The Pasta Shop in Berkeley.

Making pasta, says Lazzaretto, is soulful and satisfying. “It’s almost like therapy,” he notes. “At the end of the day, I like seeing what I made.”