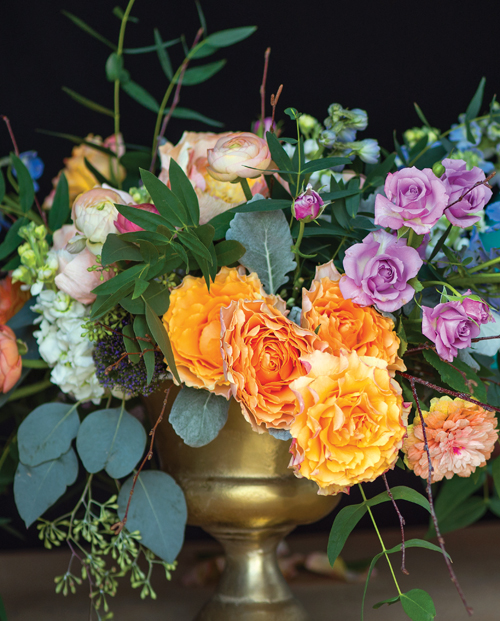 First came the slow food movement, which promotes regional food systems and traditional cooking as an antidote to the ubiquity of fast-food chain restaurants. Now there’s the slow flowers movement, which aims to reconnect florists and consumers to regional flowers and the farmers who grow them.

Sacramento florist Shannon Cosgrove-Rivas of Flourish, an adherent to the slow flowers movement, says that for years she has made a point of buying as many local blooms as possible. She says local flowers not only hold up better in bouquets because they haven’t had to travel long distances, but also that “you want your flowers to look like the season” in which they were used. “It seems simple, but it’s kind of a revolutionary idea.”

In fact, Cosgrove-Rivas feels so strongly about seasonality that she planned her wedding date so that she could carry Sarah Bernhardt peonies down the aisle. “I think it’s important that our flowers have a sense of place and time,” she says. “Plus it’s really romantic.”

Like the slow food movement, the slow flower movement is centered around establishing close relationships with growers. Cosgrove-Rivas, for example, tries “to purchase as much as I can as close by as I can,” including dahlias from a West Sacramento grower and peonies from a producer in Loomis, even if it means they may cost a little more.

“It’s not necessarily about buying the cheapest flower or the easiest flower,” she says. “I like working with smaller growers for those really special blooms because I know the flower’s history, I know who grows them, I know how they’re grown and how they handle them. I’m able to produce the most beautiful bouquets because I work with people who are very passionate about what they do.”

The slow flowers concept is the brainchild of Debra Prinzing, a Seattle-based author and gardening expert who saw the value of creating a more sustainable flower industry. She is an outspoken advocate for utilizing local botanicals instead of imports for bouquets as a way of supporting American flower farmers and reducing the carbon footprint of the floral industry. (Today, roughly 80 percent of the cut flowers sold in the United States are grown outside the country.)

In addition to buying local, Cosgrove-Rivas also adheres to sustainable practices such as composting, recycling materials and reusing containers in order to limit her business’s impact on the environment. “It may seem small, but it’s a way for me to offset some of my footprint.”