Shortly after 7 p.m. on a Thursday night, Art Luna begins readying his little eatery/gallery, Luna’s Cafe & Juice Bar, on 16th Street between N and O, for the night’s entertainment. Within the hour, poets will descend on the venue. They come every Thursday for informal readings. This night, readers will range from local teenagers new to the scene to established poets who show up on a regular basis to unveil their new writings.

Less frequently, but more spectacularly, on the third Friday of each month, the venue hosts a poetry slam—a performance contest in which champions are chosen by the crowd.

“For me, it’s an honor to have them hold slams here and be home base for the slam in Sacramento,” explains Luna, who occasionally writes himself but mainly channels his artistic expression into photography. The 67-year-old, his head hair and wispy goatee white, bustles around his 10-table cafe, where the walls are covered with paintings by local artists. He is wearing shorts, flip-flops—the two nails of his big toes are painted blue—and a T-shirt. Luna, who opened this cafe with his sister back in the 1980s, cleans the round tables, each topped with either red or blue linoleum, preps the bar area, sweeps the floor, checks the microphone stand on the stage. Come 8 o’clock, his place will be full.

In the 1990s, Joe Montoya, son of the well-known late Sacramento State poet José Montoya, was running an automotive electric distribution company in Auburn. In his spare time, he read and wrote poetry, too, and on occasion drove into the city to attend events. These were usually formal shindigs, peopled by academics, held at the Poetry Center and a handful of other venues. In 1995, believing there was room for a more casual way to showcase poetry in town, Montoya approached Luna about the possibility of hosting a weekly reading in the cafe. “I didn’t know Art from Adam,” Montoya recalls. “But Luna’s had a history of harboring cultural things.” 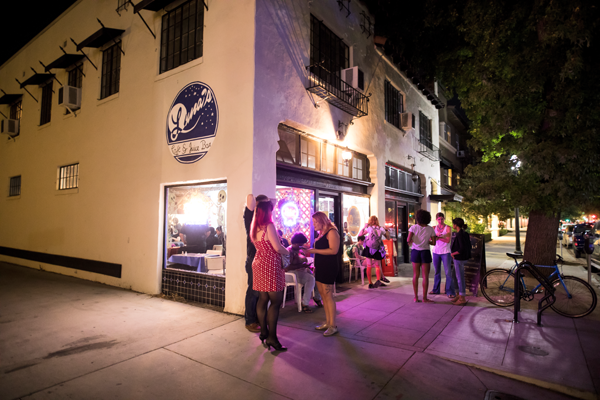 Luna decided to give Montoya Jr. a chance. To be precise, he opened up the cafe for a month of Thursday-night readings. If it proved a hit, he’d consider making it permanent. If it didn’t, well, nothing too much would have been lost. “You should have seen the first night,” says Montoya nearly a quarter century later, his eyes aglow at the memory. “Every extraordinary poet in Sacramento was there. We had about 250 people—in that tiny place. It emptied out into the street.” By 1 in the morning, when the last of the readers finally concluded, Luna realized he had a hit on his hands. “From Day One, it was excellent,” he says. The readings have been a fixture ever since.

By the early 2000s, local literature professors such as Angela-Dee Alforque, of Sacramento City College, had identified Luna’s as a place to spot new talent and nurture the creative powers of students. Alforque began bringing groups of young poets to the readings. Soon, a subculture was flowering. The readings took off not only at Luna’s, but at the Poetry Center, Blue Lamp and occasionally other locales around Sacramento.

Poetry slams are a decades-old concept. The granddaddy of the scene is the Nuyorican Poets Cafe, on New York’s Lower East Side. In the early to mid-1990s, when I was a student at Columbia University, my friends and I would visit the brick-walled space, its interior lined with rows of metal chairs, to listen to and watch the poets—their performances were at least as visual as they were auditory. We’d stay until the wee hours of the morning, drinking beers and absorbing great stream-of-consciousness screeds (usually, if I recall, about sex and anger and identity and ecstatic experience), and then take the middle-of-the-night subway back north to Columbia. It was one of my favorite spots in the city. Today, the Nuyorican still exists—I took my daughter there on a recent visit back east. It is, however, now only one of many: There are local, informal slams all over the world, and organized slam competitions draw top talent and large crowds.

At Luna’s on the third Friday night in September, Sacramento’s slam scene has burst into flower. One after another, slam participants come up onto the stage, their poems either committed to memory or saved onto their cellphones. They take turns, mano y mano, competing one against the other.

The crowd, perhaps 40 strong, is eclectic, young, multiethnic. This is Sacramento at its most diverse, its most energetic. “I want to speak. I want to speak up,” shouts 34-year-old Ike Torres, a large guy in a baseball cap, his backpack full of books, his T-shirt sporting the motif “United States of America . . . Built by Immigrants,” who currently coaches the slam team. As he starts reciting his verse at the mic, he morphs into a preacher. His face glows with sweat; his hands reach up toward the ceiling. “My pen is hemophiliac. And I can’t stop it from bleeding.” His presence is hypnotic; it’s almost Orson Welles in “Touch of Evil.” The crowd eats it up. “On this poetic battlefield, I yield to no one.” 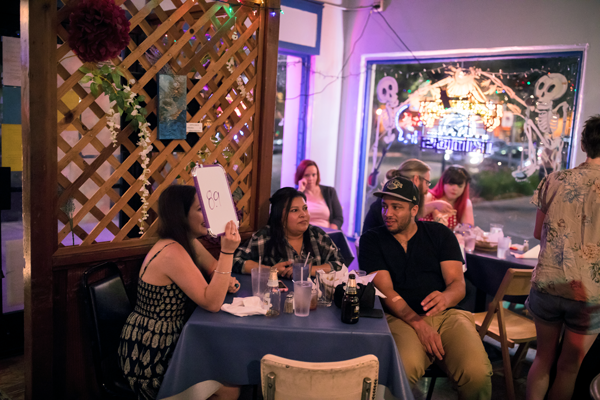 For the next two hours, Luna’s is indeed a battlefield, albeit a friendly one. Poets square off against each other, their performances judged by a panel of five with hand-held whiteboards. The lowest score and the highest score are discarded; the remaining three, each up to a maximum of 10, are toted up.

With a head of lush pink hair adorned by a huge fake flower, wearing a long purple, floral-patterned dress and bright pink lipstick, Jenny Lynn Davison, who works part time at Sacramento City College in the student equity office, is a fixture at Luna’s. She reads on Thursdays. And she slams on Fridays, being one of the members of the Sacramento Unified Poetry Slam team, the five members of which are selected by audience vote at local slam contests. Since 2014, the team has traveled to national contests in such cities as Chicago. This past August, they finished 28th out of 80 teams.

The placing, however, is less important than the connections their participation brings. These days, says Davison, who first attended Luna’s while a student of Alforque’s, Sacramento is on the map for traveling poets. “We’ve got three poets booked,” she says with pride. “From Houston, Denver and South Florida, all coming through in the next eight months.”

They come because in recent years, as Sacramento’s art scene has blossomed, the city has come to be seen as something of a destination on the poetry circuit.

“I got into slam poetry in 2004,” says Torres at a Thursday-night reading, a non-slam event. Sitting at a table near the stage, Torres recalls those early days. “Prior to this, I was running around with knuckleheads. No one was really expressing themselves in a real positive manner. It was right after my grandfather died. I wrote like crazy when he passed away. I shared with my mother, and she dug it; I shared with a couple of my cousins, and they liked it.”

Torres began reading his poems at a place called Rattlesnake Reader, then started attending readings at Sweet Fingers Jamaica restaurant, in the location of what is now Queen Sheba on Broadway. “One day, I called my friend and his girlfriend, asked them to come with me because I needed their support.”

That was the first time he read in a slam. He came in third. It triggered an avalanche of intellectual and cultural curiosity in him. “I was juiced. Another poet sang a whole poem about jazz. I became a jazz fanatic right then.”

For Torres, the slams opened up whole new worlds. He never looked back. At a regional slam contest called the Battle of the Bay, he remembers being awestruck. “It was really fun. Then we went to the Nationals in Albuquerque, 2005. I took a road trip with one of my teammates. It was this odyssey. There were people from 72 different spots—from the U.S., France, London, Canada. People looked different, not like the street cats I was around. It was amazing. I liked to hang out with the older cats; they have the best stories and wisdom. They were talking about politics, art. I was just listening. I came back and kept writing and writing. I fell in love with the art form.”

At the once-a-month slams, Davison and her husband, Marques, are—along with Torres—regular fixtures. So, too, are a slew of other poets. Many use pseudonyms such as And Yes and Sho’Nuff (Marques).

Each has their own stage persona: Jenny is brash, her lyrics sexually explicit and humorous; J. Row takes to the stage, deliberately understated, a mug of coffee in her hand; And Yes, his head shaved at the back, locks of hair falling forward onto his forehead, is cocky, a boxing champ’s belt slung over his right shoulder.

The poems range from descriptions of sexual encounters to introspective musings on depression, from lyrics about the complexities of navigating race relations as a black man in a white world to experiences smoking weed. The crowd is raucous yet at the same time respectful.

“I was once a goddamn fool, y’all,” says Torres in his capacity as slam host for the night. “Now, I’m a man on a mission. I wake up, and it’s just me and the mic, my soul awakening under the dark light.”