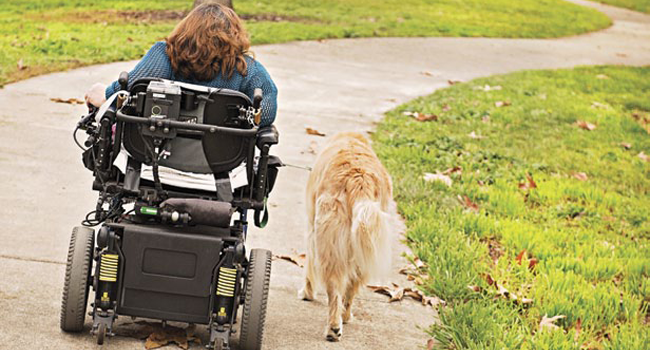 When you visit Beth Graham at her Pocket-area apartment, she greets you at the door—but it’s Sajak you’d better pay your respects to. A golden retriever, Sajak is Graham’s live-in best friend, confidant, playmate and 24/7 guardian. “Service dog” seems an inadequate descriptor for him—he’s more like a full-service dog.

Graham’s story of personal and professional achievement would be notable even before you took into account the strikes she’s had against her since birth. She holds a master’s degree in counseling (from Edinboro University in Pennsylvania) and works in two of Sacramento’s toughest charter schools. But when you realize she’s accomplished this and more despite severe physical challenges, her story morphs from notable to remarkable, in part, thanks to Sajak. Graham, who’s 34, was born with osteogenesis imperfecta. It’s more commonly known as brittle-bone disease—and exactly what it sounds like. With very little effort, or just one small miscalculation, she can break an arm, a leg, a rib or worse—and has. (By the time she was in her teens, she says she’d broken 100 bones.) Principally for her protection, she’s been in a wheelchair all of her life—the same one she accidentally slid out of about a year ago, breaking her right arm. And while she acknowledges that her concerned neighbors, resourceful EMTs and own grace under pressure kept a mishap from turning into a tragedy, she gives full credit to Sajak for saving her life.

He knows to get me the phone if I tell him to,” Graham says, “but this time it was in my charger when I fell. He hadn’t been trained to retrieve it (from there). So he did what he could: He stood over me and barked and barked and barked, as loud as he could, until two of my neighbors shouted through the locked door, ‘Are you all right?’ “I told them I’d fallen and asked them to call the paramedics,” Graham continues. The neighbors did so, but when the rescue workers arrived, they still had to deal with the locked door. “They broke it down,” Graham says calmly. And did the dog, seeing the rescue workers as intruders, instinctively attack them? “No, no, no,” she says with a laugh. “Sajak knew they were there to help me. He actually escorted them to me.”

WHAT THE VETS SAY

In the past few years, service dogs have become the superstars of the animal kingdom. They are “allowed” to accompany their masters in restaurants and on airplanes, and it’s illegal for anyone to not allow them access. And that’s all to the good, says Ken Schenck, D.V.M., president and—with his wife, Charla—co-owner of Mueller Pet Medical Center on Freeport Boulevard. The largest animal clinic in Sacramento, the center is a 27,000-square-foot building that houses nearly 100 employees and countless four-legged guests.

“I’ve been embracing the bonds we have with our pets since I became a veterinarian 40 years ago,” Schenck says. “Animals have been used in prisons to mellow [very distraught] people out. One of my clients here had a dog that could predict the seizures the man, who was a Vietnam vet, suffered due to post-traumatic stress syndrome. When the dog sensed the man was about to have a seizure, it would lean on him in his chair to prevent him from falling onto the floor.”Schenck says that he’s encountered “dogs that can open car doors, open drawers for their patients. Service dogs are not just for the sight-impaired. They enable people with various disabilities to do things they would never have been able to.” He also mentions that there are people who try to game the system just so they can travel with their pets without crating them and having them ride in the cargo hold: “Someone will find a sympathetic M.D. who writes a note saying the family pet is a service dog. It’s an abuse of the process, plain and simple.”

Heidi Hulon, a Kentucky-based doctor of veterinary medicine for 21 years, also serves as a senior technical consultant to Elanco, which manufactures animal health products. The company has aligned itself (and vice versa) with Canine Assistants, an Atlanta-based matchmaking agency that places 75 to 100 service dogs per year—principally, golden retrievers and goldendoodles (retriever/poodle mixes)—with children and adults who have mobility challenges. It’s the agency that brought Beth Graham and Sajak together.

A nonprofit organization, Canine Assistants charges its clients absolutely nothing for its services, existing on donations and grants. Jennifer Arnold, who was diagnosed with multiple sclerosis as a teenager, founded the agency in 1991. Under her leadership—she is still its executive director—the agency has placed more than 1,500 service dogs in the past 24 years.

“One of Canine Assistants’ unique qualities is that the dogs choose the people they’ll go home with,” says Hulon in a phone interview. “They’re about 2 years old when they’re placed with a patient. They’ve been raised on a farm, during which they were exposed to a lot of people. They’re used to being outside and inside, around cars and noises, and they don’t get spooked.

“These animals are raised with love as the main (disciplinary) tool,” Hulon adds.

The dogs from Canine Assistants work in a number of service categories: as guides, hearing assistants, seizure responders (and occasional anticipators) and, of course, emotional supporters.

Beth Graham has lived and worked in Sacramento for the past seven years, which is also how long she’s been a teacher/counselor and how long she and Sajak have been together. “I met him at Canine Assistants when he was about 18 months old,” she says. “I was worried he might unintentionally hurt me because he was so enthusiastic. But we went out in the backyard and we sort of threw a ball around, and he would bring it back and give it to me so gently, I knew it’d be all right.”

However, Graham adds, “Sometimes he doesn’t return the ball right away. His favorite game is keep-away.” She grins. “He’s sometimes a naughty boy.”

Born in Pittsburgh, Pa., Graham earned her master’s degree in counselor education in 2005. One day she announced to her parents that she intended to find a job and move wherever she needed to. “My parents were very encouraging about it,” she says, “but they insisted I do so only if I had a service dog. One of their neighbors had one, and they thought it did wonders, not only for safety but (the neighbor’s) outlook.”

Graham says she was hired for her present job over the phone, so the fact that she had a visually evident disability wasn’t part of the conversation. And when her employers met her? “At first, they said, ‘Oh, no!’ But all they were concerned about, once we got to know each other, was whether I’d get hurt or not.”

One recent morning at Graham’s apartment, Sajak alternately nuzzles, nestles and plays hard-to-get with a guest—until Graham, who has a clear, softly commanding voice, merely says his name. Then, down he goes into a relaxed but ready sprawl on her carpet (and partially atop the guest’s shoes).

Asked if she named Sajak after the longtime “Wheel of Fortune” host, Graham says, “No, I didn’t do that. But that’s who he’s named after. He was already Sajak when I met him. The dogs are raised in groups, and I guess someone thought it was cute to give them all TV names. Sajak’s sister is named Vanna and his brother is Carson, for Johnny Carson.”

At the schools where Graham counsels seventh- and eighth-graders who’ve been involved with gangs, drugs and pregnancies, Sajak’s job is to coolly sit near Graham. The kids are told, she says, that “they’re not allowed to pet him because he’s working when he’s in the office or classroom with me. But Sajak sometimes messes that up by cuddling up to the students when he thinks I’m not watching.” Graham giggles.

Because she’s confined to a wheelchair and is noticeably fragile, Graham is asked how she can handle kids who are not only tough but also not especially respectful of authority. “Two things happen,” she says. “First, when we talk and they see what I’ve done with my life, they sometimes realize that whatever their problems are, someone always has worse ones. I tell them my life isn’t any harder than theirs. I admit to them I have issues, like everyone does, and I can sometimes sense them saying—and sometimes out loud—‘Who am I to complain?’

“And I think they get a little protective of me. Without being lectured, they’re starting to learn compassion.” When she’s not counseling young people in her office, she teaches character development, career assessment and college readiness. “I also emphasize I’m totally anti-bullying—and how to be assertive without being arrogant.”

Graham has two siblings. Neither was born with brittle-bone disease. Her brother, Matt, is a science teacher and her sister, Amanda, is an occupational therapist. She says that despite her limitations, “I had a reasonably normal childhood. I got into trouble, just like my brother and sister did.”

She says she’s a big reader—“But nothing scary,” she says with a mock shudder—and has a satisfying social life that includes a network of friends with whom she spends evenings “cooking dinner at each other’s houses, seeing movies, playing games, that sort of thing. You know, despite appearances, I really do have the same amount of energy as everyone else.”

Graham also has Sajak—and he gives her the support to live her remarkable life.

More information on service dogs is available online at canineassistants.org and on its current campaign with Elanco at celebratethebond.com.